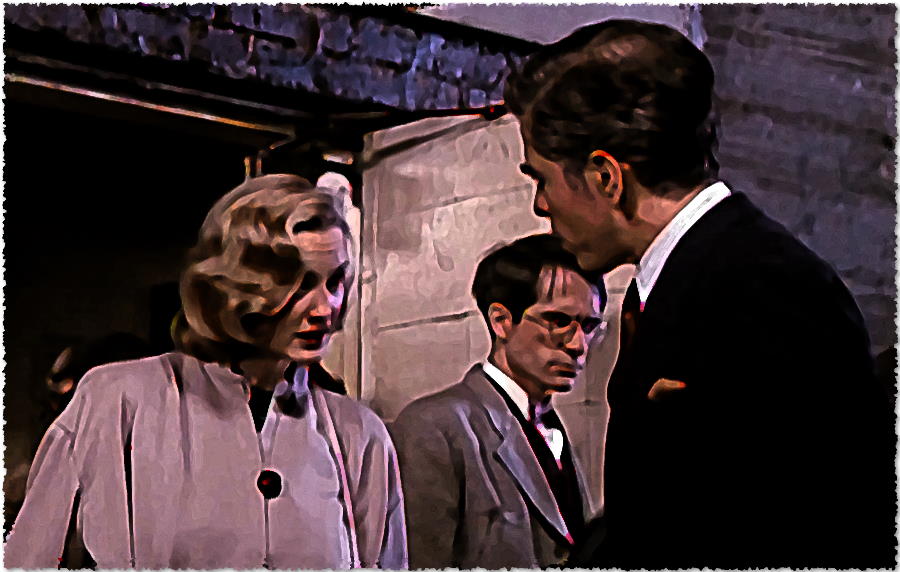 How often within biography does the tumultuous life of a person override that individual’s achievements? When someone who seems to have talent and drive is merely given a bad hand in life, as she is continually pressed under the brunt of bad luck and near misses? Frances isn’t a story about a near miss, as her circumstance seemed to be stacked against her from the start. Yes, she did have a combative personality and perhaps was too radical for her time, but events unfold so unfortunately that one might begin to wonder if something had it out for her. Turns out that something’s name was Lillian, her mother.

Jessica Langue plays Frances Farmer—a headstrong Seattle girl who at 16 wins an essay contest with an essay titled, “God Dies.” She writes, ‘It wasn’t a murder. I think God just died of old age. And when I realized that he wasn’t any more, it didn’t shock me. It seemed natural and right.’ Following her reading, she is condemned to hell by a woman in the audience. Yet others seem intrigued. The publicity leads to some stage opportunity and eventually Hollywood. However Frances isn’t really interested in becoming a Hollywood pinup, but rather, she views Hollywood as a ‘steppingstone’ towards Broadway.

Her controlling mother, Lillian, seems to live through her daughter. She loves the attention that Frances gets, because in some strange way that must mean her life matters. But the studio is objectifying and cruel—pushing pills and boxing Frances into something ordinary. During a photo shoot, she asks: ‘What does any of this have to do with acting?’ Stubborn and opinionated, Frances challenges the studio. She wants to be taken seriously. She eventually meets playwright Clifford Odets and she stars in one of his plays. He is married but they have an affair, and then in a moment of heartache, he leaves her for his wife, never to be heard from again. And so begins one of the many rejections within Frances’s life.

But what is the big deal, some might wonder. Many have undergone rejection—especially those in Hollywood. Look at Judy Garland, after all. But Frances never got that far. Instead, she drank too much and, in midst her depression, she overslept and missed her rehearsals. Eventually, she assaulted her hairdresser, and this landed her 180 days in jail. The tabloids didn’t help.

There is a recurring character named Harry (played by Sam Shepard), who as Ebert notes in his review, ‘seems to drift into her life whenever the plot requires him.’ This is a weak aspect of the film, as this relationship is never explained and for someone experiencing abandonment, why wouldn’t Frances just marry him already?

Yet the cruelest character is that of Frances’s mother, who is played by Kim Stanley. To say she is controlling would be an understatement. After Frances is released from jail, she is deemed incapable of her own independence, and so her mother becomes her legal guardian. This is where things really begin to go bad. Because Frances is no longer seen as an independent, capable adult, (she is ‘too out of control’) her mother is free to institutionalize her whenever Frances ‘lashes out’ (aka argues or disagrees) or whenever she sees fit.

Despite whatever Frances might have brought on herself with her poor judgment and erratic behavior early in her career, she was most certainly not deserving of this cruelty. Shuffled in and out of asylums, gone are her freedoms, liberty, and dignity. The film then becomes an exercise in gaslighting, where Frances is made to believe she is crazy when clearly, she is not. Disagree with her mother and back to the asylum she goes.

One question involving Frances’s life is that supposedly she was forced to undergo a lobotomy. The film takes this as truth, but there have been disputes as to the validity. It is no matter for the sake of narrative, as the film shows Frances strapped to a gurney and being forced into a lobotomy. Later, she appears on a television show, older and more demur. There is a passivity to her personality that wasn’t there before.

Graeme Clifford’s Frances isn’t a great film, as there are moments within the narrative that feel forced. (Sam Shepard’s character, as example.) But it is a film that thrives most notably due to Langue’s performance, wherein she portrays this troubled woman with just the right amount of headstrong intellect and vulnerability. Frances Farmer is someone who never got the chance to be a great actor, and ultimately she falls into the category of not even ‘could have beens’, but more so one of those forgotten maybes. The sad thing is, however, that no one likely would remember her were it not for her sad life.

Even Ebert notes that when pressed, he was unable to recall her films. I too admit that I am unfamiliar with her work, even though the Criterion Channel offers regular actor features, yet she has never been one. Maybe she wasn’t as talented as the film would like us to think, but even so, it’s not like she was ever given much of a chance to showcase it. After all, how can one begin to grow and feel whole when she is stuck within a straitjacket, amid a dirty room of shouting, confused, institutionalized people? Injected with insulin and shocks and all for what? Frances never wanted to return to Hollywood, and according to the film, she would have preferred to live a quiet life with a garden. Perhaps that would have brought her peace. But she didn’t even get that.

Many might claim she brought much of this on herself, at least in her early years. As troubled as she was, she could have not driven drunk, or assaulted that woman, or landed herself in jail. But then, the very people who are supposed to help her—the doctors and her mother—seem to also want to destroy her. In fact, it is almost as though they receive some pleasure from their cruel exercise of power.

While Jessica Langue’s acting is stellar, there isn’t much to glean from Frances other than she was a once rising star who lived a terribly sad life. Certainly there are things she could have done differently, but there comes a point where there is only so much aloneness one can take. Why didn’t she run away with Harry, since he seemed to appear each time she needed him? Was he fictional or merely just a weak addition to serve the plot? It doesn’t matter. I began this review noting that something must have had it out for her. Perhaps those condemning her to hell might think that God was punishing her for that essay. ‘I wondered a little why God was such a useless thing. It seemed a waste of time to have him. After that he became less and less, until he was…nothingness,’ Frances wrote. One might say the Devil appeared in the form of her mother.

If you enjoyed this review of Graeme Clifford’s “Frances”, consider supporting us and get patron-only content on our Patreon page. This will help the growth of this site, the automachination YouTube channel, and the ArtiFact Podcast. Recent episodes include a comparison between Thomas Pynchon’s Gravity’s Rainbow and Kurt Vonnegut’s Slaughterhouse-Five, a survey of photography from Josef Sudek to Laura Makabresku, and a discussion of Hermann Hesse’s classic novel, Steppenwolf.