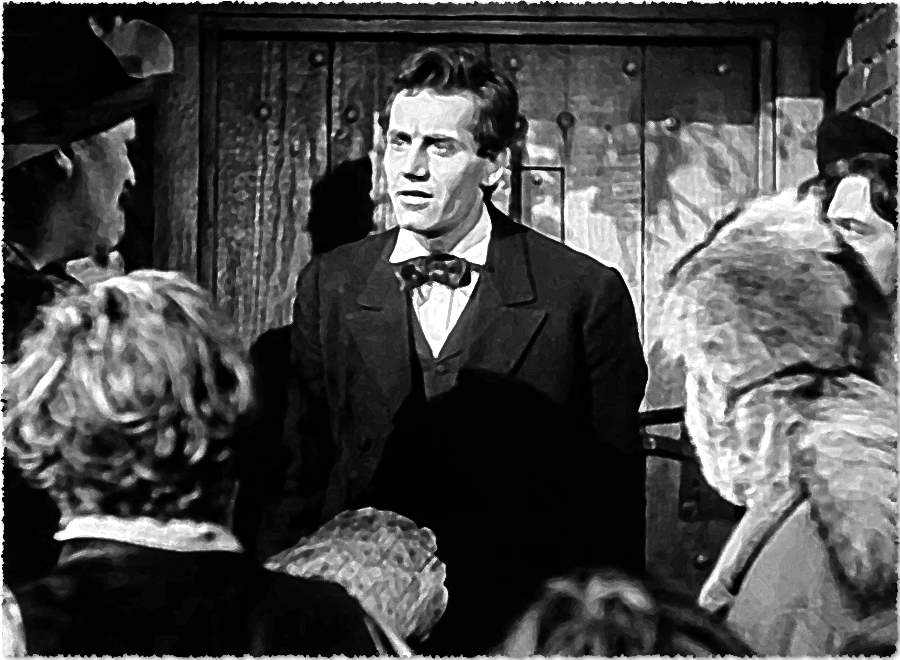 The film, which is set a hundred years before its 1939 release (1830s), is reminiscent of other Ford films. Those familiar with Fonda’s work will remember his rendering of Tom Joad in John Ford’s adaptation of John Steinbeck’s The Grapes of Wrath, and how life within Young Mr. Lincoln much resembles the Great Depression era film, even if unintentional. (We are the people that live.) Remove the costumes and carriages, and the front porches and poverty remain the same.

Young Abe is a nice guy. He stands tall and his shoulders slouch awkwardly. He has ideas for improving the world and his expressions are quiet, yet intelligent. He thinks he might go into law, but he isn’t sure. When one afternoon he chances a particular love interest named Ann Rutledge (Pauline Moore), she encourages him to pursue his goals, and she reminds the modest Abe that he is smart. Yet the young Lincoln, who studies law and poetry in his free time, is left mourning for Ann, who dies young. Allegedly, she was his first love, wherein (the real) Lincoln himself stated: ‘It is true—true indeed I did. I loved the woman dearly and soundly: She was a handsome girl—would have made a good, loving wife… I did honestly and truly love the girl and think often, often of her now.’ In the film, following her death, Abe speaks to her grave and asks for her to decide his fate. Standing a twig erect, he says, ‘If it falls towards you, I will study law.’ (One need not wonder where the twig falls.)

It has been said that Abraham Lincoln has had more biographies written about him than any other person—President, artist, cultural, or otherwise. If this fact is true, one can understand why, given his historical impact. In many ways, Young Mr. Lincoln is a rather straightforward story—he meets Mary Todd, his future wife, and then serves as a defense lawyer in a criminal trial. The courtroom scenes have a very Frank Capra-like feel, if for nothing else than the feel-good quality that results from justice having been served. Once again, Abe saves the day.

When Lincoln encounters his young, future wife (played by Marjorie Weaver) while at a party, she chastises him for not asking her to dance. ‘I don’t dance, ma’am,’ the awkward, gangly, and ever so tall Mr. Lincoln replies. Reluctantly, he does dance with her, but ultimately he isn’t very good at it. (Albeit for Mary Todd, given his reluctance, this comes as no surprise.) As with many films of Ford’s era, their romance is rushed and barely touched upon, but not like this matters, as this film is more about the trial that ensues, and the justice that prevails, all due to Lincoln, of course.

Mr. Lincoln eventually undertakes a murder case where he serves as the defense lawyer for two brothers. One will be hanged for the crime. Who did it? Neither brother wants to blame the other, and so each claims himself as the guilty party. But the clever moment is when we come to learn that both brothers are innocent, and so because each knows he did not commit the crime, each then believes the other is guilty. Yet neither accuses the other. Ultimately, it is another man who is guilty, and without hesitation, Mr. Lincoln is to the rescue.

And what would a film on Lincoln be were he not chopping wood and muttering sentiments so innocently? This is not to imply that Fonda’s rendering is one-dimensional, but more so that Ford delivers a straight-forward and enjoyable drama that depicts a mythic man who was to be called Honest Abe throughout his life and Presidency. While this is fine, this simple depiction comes at a cost. The film, while idealistic, does render a mythic portrait of not so much a man, but of lofty innocence. Of course, all this supposedly takes place before Lincoln ran for President, before the Civil War, and before his eventual murder.

John Ford is known for his classic, western depiction of Americana, be it via his Westerns or his depiction of The Great Depression. The people and their ideals remain the same, however. From Stagecoach (1939) to The Man Who Shot Liberty Valance (1962), we are given a sense of not just American life but also American land. In fact, the films would not thrive were it not for the setting itself, this indelible land. The ending of Young Mr. Lincoln is lofty and predictable, wherein the camera focuses on the Lincoln Memorial in Washington. One can see that this film does not depict a person, but rather, an image of a person. Instead of a human moment, we are presented with a statue—a symbol. A Lincoln Love Letter, if you will.

As contrast, many films depicting historical figures rely too much on action—this Hollywood idea that there always has to be a battle to undertake. Just as with Robert Bresson’s 1962 classic The Trial of Joan of Arc, we are not shown the moments when Joan is in combat, but instead we are given those times afterwards—the Trial itself. By not delving into mayhem and explosion, we listen while events are only mentioned, and we visualize them in our mind’s eye.

Similarly, in Young Mr. Lincoln we need not know all the detail that will inevitably ensue up until Lincoln’s life’s end, but like with any mythic depiction, gone is the human complexity and nuance of Mr. Lincoln, and instead we see him from a distance—idealistic, important, and imperfect, albeit harmlessly. (His biggest flaw seems to be his social awkwardness, and Henry Fonda renders this performance with just the right amount of innocence.) Yet, when fact fails to deliver the proper drama, one must resort to fiction. After all, isn’t it more important for a historical rendering to be believable, than it is to be right? If one wants ‘truth’, go read one of those many Lincoln biographies. They’re not likely to be as endearing as Henry Fonda’s acting.

If you enjoyed this review of John Ford’s Young Mr. Lincoln, consider supporting us and get patron-only content on our Patreon page. This will help the growth of this site, the automachination YouTube channel, and the ArtiFact Podcast. Recent episodes include a comparison between Thomas Pynchon’s Gravity’s Rainbow and Kurt Vonnegut’s Slaughterhouse-Five, a survey of photography from Josef Sudek to Laura Makabresku, and a discussion of Hermann Hesse’s classic novel, Steppenwolf.