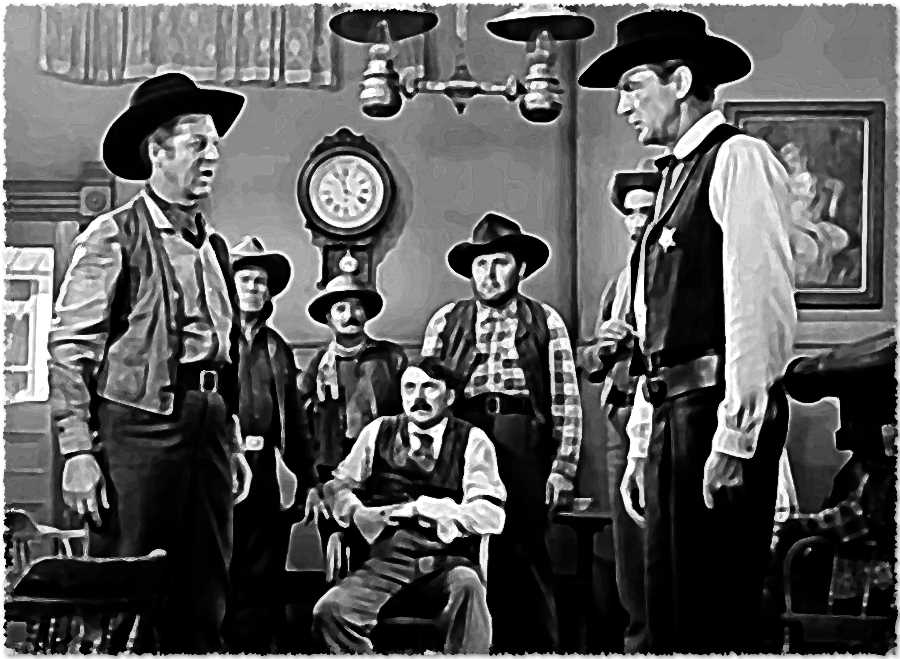 Upon release, Fred Zinnemann’s High Noon was a highly divisive film. While it won many accolades, critics and audiences were disappointed to find common elements, such as chases and duels, replaced mainly by drama. Hollywood names like John Wayne and Howard Hawks deemed the film unamerican due to its subversion of the western hero stereotype. Today, the film stands as an indisputable classic, exhibiting a realism uncommon to films of its type. High Noon achieves this because, in parallel with the film’s themes, the narrative goes against most viewers’ notion of what a western should be, revealing the superficiality of many of the genre’s tropes in the process.

High Noon takes place in a small town in New Mexico Territory, where marshal Wil Kane (Gary Cooper) prepares to retire. We see Kane as he marries devout Quaker Amy Fowler (Grace Kelly) before they are interrupted by news claiming Frank Miller (Ian MacDonald), an outlaw Kane once sent to prison, has been released and is arriving on the noon train. At first, Kane agrees to ignore the return of the criminal and leave town with his new wife. However, he soon turns back the cart, unable to look past his responsibility as the marshal who arrested Miller, or perhaps unable to look past his own pride. Indeed, Fred Zinnemann ensures that psychology is never far behind, as if tempering the viewer’s sense of righteousness with its protagonist’s self-righteousness.

The bulk of the film follows Kane as he attempts to recruit townsfolk to face the outlaw. Considering how most of the runtime focuses on the marshal, the picture would have failed if not for Gary Cooper’s stellar performance, which evokes the everyman without ever becoming commonplace. On paper, the character of Will Kane doesn’t seem too intriguing: a righteous man, willing to do what he thinks is right even when people around him are against it. However, Cooper vitalizes his character, preventing it from becoming a stereotype and elevating Kane into the sort of person one could meet and admire.

The film’s rapid pace, which progresses in real-time, makes an already concise work feel even more succinct. Because of this, one would be tempted to say that High Noon is an action flick. However, while the film might seem to be about the conflict between Kane and Miller, the narrative’s real focus is Kane’s relationship with the townsfolk around him, making High Noon less a western and more a drama that happens to take place in the wild west. As we are introduced to each character, we meet people who think of Kane as a great man, others who see him as a threat to their business, and almost none willing to help him fight off the criminal. Kane is forced to reconsider his friendship with people who would prefer him to leave town instead of helping him keep their home safe, even when standing by could mean his death.

One remarkable scene has Kane visit Martin Howe (Lon Chaney), the town’s former marshal, who has grown bitter since retirement. He warns Kane that the life of a marshal is “all for nothing.” He tells Kane that most people “need to talk themselves into doing what’s right because deep down they don’t care” and that the effort of a marshal is often met with ungratefulness. He begs Kane to leave town. Kane ignores the pleas, but the viewer can tell how the words of his mentor weigh on him. The thrust of High Noon lies in this sort of moment, wherein one wonders: should Kane do what’s right, even as others are unappreciative and undeserving of his efforts? Fred Zinnemann plays with this tension continuously, alternating the mob’s energy with emotional letdowns Kane tries not to take to heart.

Many critics consider High Noon an allegory of the blacklisting which took place in 20th century Hollywood. But the film is not preoccupied with the spectacle as much as with the feelings of alienation that its screenwriter, Carl Foreman, probably felt during this period. Proof of this is how the film focuses on Will Kane’s vulnerability instead of adhering to the “invincible hero” present in most westerns. Throughout the film, Kane constantly worries about his predicament, fails to convince the townsfolk to aid him, and only barely survives the final showdown. This approach annoyed many, but it significantly increased the realism of High Noon and the depth of its drama. A viewer might be excited when he sees a man take out five outlaws without a scratch or the help of anyone else, but this is superficial. Most people can’t relate to someone capable of those feats, so a film that depends on such tropes will likely be limited when addressing more mature issues.

Another reason High Noon has aged so well is that the film’s themes can be easily imbued to myriad real-life situations. The film has political connotations, but these bolster into something more universal due to the archetypal quality of the narrative. How many times have you, reader, felt at odds with the masses, even though you know you’re on the right? Other films delve more deeply into such subjects, but the fact that Fred Zinneman tries to communicate something compelling, and achieves it within its limited scope, elevates it far above most genre films.

Yes, there are better films than High Noon, but while a great film might make for deeper insight, films like these provide more material to artists themselves. While a great work might strike most as an unreachable achievement, a good genre film points one in the direction of excellence, just as studying Michelangelo’s unfinished sculptures helps one understand the master’s methodology even better than his completed works. When we look at Fred Zinneman’s film, we realize that what makes art worthwhile has nothing to do with superficial action and all to do with human drama. After a few days away from watching it, I can remember almost nothing of its well-crafted shootout. However, I still remember how Kane’s mentor warned him of the townsfolk’s apathy, and how, after surviving the fight with Miller, Kane throws his tin star to the ground – an usually bitter, yet apt, ending for this kind of picture. In this manner, High Noon will remain on the mind of filmgoers through ages to come, even if only as a stepping stone on which greater works may arise.

If you enjoyed this review of Fred Zinnemann’s High Noon, check out the automachination YouTube channel and the ArtiFact Podcast. Recent episodes include a breakdown of Elizabeth Barrett Browning’s Aurora Leigh, a dissection of Kurt Vonnegut’s classic novel, Galapagos, and a long discussion of photography from Alfred Stieglitz to Fan Ho and Vivian Maier.

More from Gabriel Massó: Modernization Done Right: “Iphigenia” (1977) by Michael Cacoyannis, On Todd Phillips’s “Joker” (2019): Laughable, Yet Humorless, Jack London’s “The Call Of The Wild”: The Power Of Things As They Are