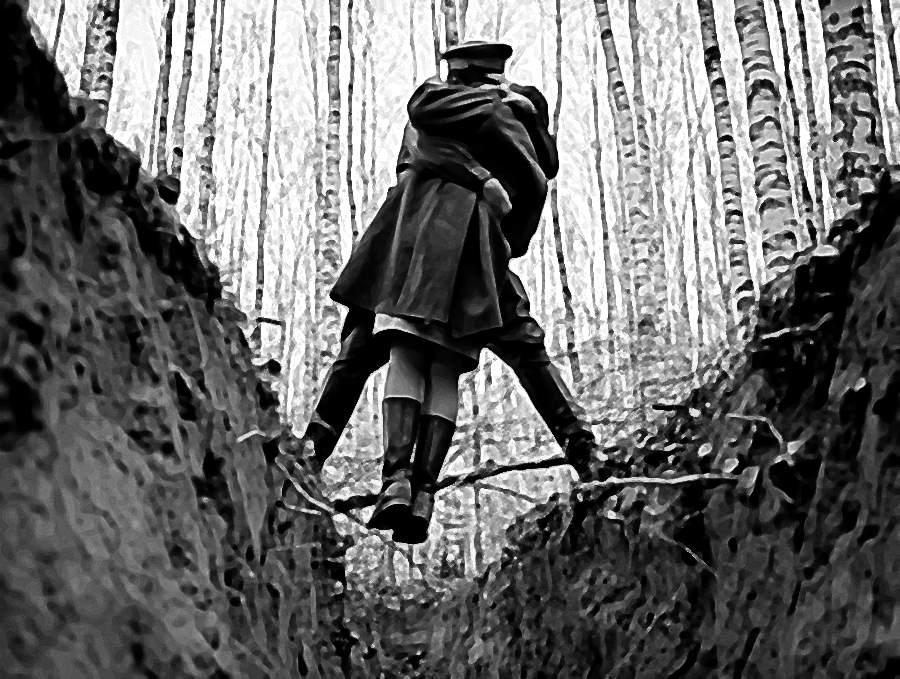 Before Putin invaded Ukraine in late February 2022, I had already set out to write a number of reviews on Tarkovsky’s films. A beloved director, why should this not be the case? However, now when watching this Russian filmmaker, I admit to viewing his films differently. This is nothing against Andrei Tarkovsky himself, who was a sensitive, empathic man who would be outraged by this war, were he alive. But within his films, there is something there. I caught a glimpse of it whilst watching Stalker (one of my faves), but I most certainly saw it again within Ivan’s Childhood.

The film follows a young boy who has lost his parents in World War II, at the hand of the Nazis. Energetic and precocious, he begins with a memory of his mother, wherein the two are sharing a moment upon the beach. The scene encompasses a very Bergman-like feel, and it establishes both the sentiment and hardship therein. Ivan’s family has just died. But Ivan is a smart kid who ranks beside his fellow soldiers. He is strong, despite being too thin. He stands upright and challenges order. Looking up, the sky explodes amid the trees—everywhere—all around there are trees. Not to worry, they will stop soon, he is told. The bombs, that is. ‘I am not afraid,’ Ivan says. All around, the world is grey and decimated. In fact, Tarkovsky’s use of black and white is essential, wherein the fire appears white, whilst the shadow—whatever that is—consumes and identifies.

According to Wikipedia, ‘In a 1962 interview, Tarkovsky stated that in making the film he wanted to ‘convey all [his] hatred of war’, and that he chose childhood ‘because it is what contrasts most with war.’ In examining Tarkovsky’s quote, one must ask if he is correct. Does childhood contrast most with war, or is it a matter of war contrasting with youth, life, and liberty? Who wants to think of war as a substance for youth? Of course, the reason he said this, I imagine, is that childhood should be a time of innocence and idealization, rather than a time of pain and hardship. There needs to be fantasy, imagination. The thought of one having to grow up amid a time of war is also a thought involving the loss of this innocence, this playfulness. Perhaps that is why Tarkovsky begins the film with the boy (Ivan) laughing with his mother. Then, the blissful recall of rain overtakes.

I have often said that Andrei Tarkovsky’s films are the closest that one will get to watching someone’s dream. Both Mirror (1975) and Stalker (1979) illuminate this. For whilst both films do follow a narrative, the storylines are not ‘traditional’ and so one is able to dip in and out as one might within a dream, or a poem. Scenes build upon one another, like with any narrative, but they also can stand alone, similar to a poetic passage within a novel. Ivan’s Childhood, whilst employing some of those poetic elements, moves along more traditionally in its narrative. Perhaps this is why I have struggled to say something about this film, despite having watched it several times and enjoying it. In one scene, a Russian soldier flirts with a young girl named Masha. She is passive at first, but he pushes himself onto her. Then, in perhaps one of the most famous scenes, he kisses her whilst holding her over a ditch. Later, when an eager young man approaches, Masha behaves indifferently towards him, as she looks on for the distant soldier who seems to have moved on without her.

It is likely that the soldier was this young girl’s first kiss—and that within this scene there is some sprinkle of longing, that forever knowledge of innocence having been if not lost, then at least abandoned. Meantime, Ivan will never learn what adulthood is like, as he is eventually caught and hanged by the Nazis in the final scene. A glimpse of Goebbels’s six children is also shown—their covered bodies. Six souls who died before their adulthood could arrive. This is what happens in war. Yet, our knowing this doesn’t make it any less upsetting.

Upon reading the stories of the Ukrainian dead—all those who perished at the hand of the Russians—the more I read, the more grisly it gets. Individuals shot with their hands tied behind their backs, whilst young girls are raped. Food is scarce. Children, women, the elderly don’t matter. ‘This is war,’ one might say. Yes, but why does it happen? Why is it ok? Why is humanity so prone to destroying itself? Have we not learned a thing?

Currently, I am finishing a poetry book that will involve poems on many French painters. Furthermore, I have done a number of poems on Paul Cézanne—his life, his work, and his relationship with Emile Zola. The particular painting about which I was writing was Forêt (1902-1904). I attempted to describe what I saw and what impressions it spawned. But the words, the narrative seemed to lay lifeless. Inert. There was something missing—some context. I kept studying the work and I kept imaging someone dead behind the trees. Or perhaps someone is hiding. I then added the appropriate words and ultimately forgot the painting all together. I went with this topic instead:

Never watercolor, the sky is
Oil on canvas. Into the green, look
And reach—the lower branch leans—
Is it she? Hide

Upon stone—mourning
Chill. Nothing but mineral
Remains. This grey earth
Tree where flesh rings bone.

So, this is not merely a lesson in creativity, but a lesson about going where the moment moves. I wrote this poem the day after having watched Ivan’s Childhood, and the Cézanne painting is almost non-existent. (No one would make the connection, in other words.) The only connection is my confession of influence via this essay.

Tarkovsky wasn’t someone I would consider excessively political, even though one can imbue politics into his films. Stalker certainly carries those political undertones, but they’re not preachy and nor does Tarkovsky pontificate with platitude. He was more about the poetry. Ivan’s Childhood is his message. The film opens with a cobweb, and I suppose this is his metaphor. Ever so delicate, that innocence can be decimated with just the brunt force of a human hand. Within a forest, trees are everywhere, until they are no longer. Bombs take over. Skies illuminate and terrify. I suppose that I will forever connect Cézanne’s painting to this film, even if unintentionally. Living within the recall of memory, what is (Ivan’s) Childhood?

If you enjoyed this review of Andrei Tarkovsky’s Ivan’s Childhood, consider supporting us and get patron-only content on our Patreon page. This will help the growth of this site, the automachination YouTube channel, and the ArtiFact Podcast. Recent episodes include a comparison between Thomas Pynchon’s Gravity’s Rainbow and Kurt Vonnegut’s Slaughterhouse-Five, a survey of photography from Josef Sudek to Laura Makabresku, and a discussion of Hermann Hesse’s classic novel, Steppenwolf.

More from Jessica Schneider: The Mythic Depiction of John Ford’s “Young Mr. Lincoln” (1939), The World and Its Overwhelm: Hart Crane’s “At Melville’s Tomb”, The Murmur of Memory: Alain Resnais’s “Last Year at Marienbad” (1961)