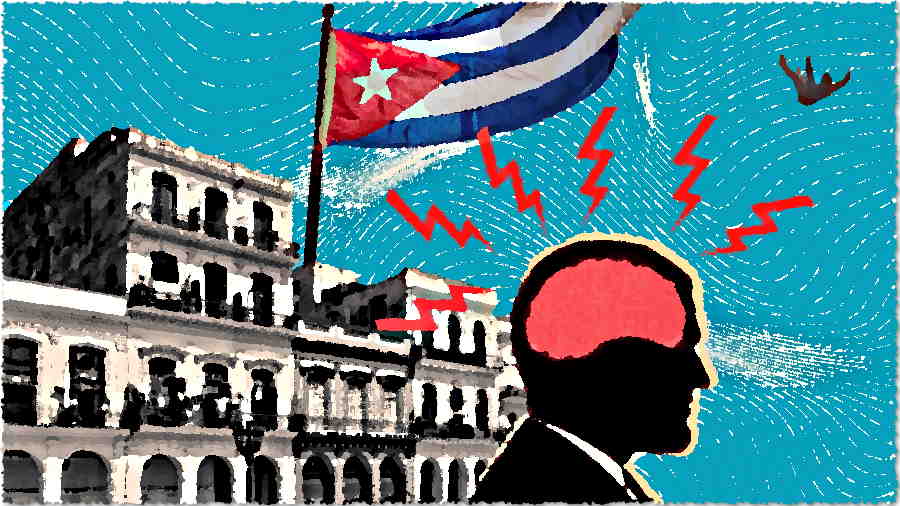 Imagine suffering tinnitus, visual problems, vibrations inside your skull, nausea, vertigo, insomnia, fatigue, and dizziness. You are understandably alarmed and immediately visit your doctor, who pronounces you fit and well. You get a referral to a more specialized physician, who runs quite a few very sophisticated examinations. She finally pronounces that you are in peak condition—fit and well. But the symptoms persist—excruciatingly so—to the point where you go to a renowned, top-of-the-line expert (you have excellent insurance!) and you are put through a battery of tests and procedure involving machinery you’ve only seen n sci-fi movies. After three days of expert investigation, the doctor gives you the results: You are fit and quite well, and he suggests a visit with a psychiatrist. Puzzling, frustrating and very worrying, right?

The symptoms were first reported in 2016, by U.S. and Canadian embassy staff in Havana, Cuba—thus the sexy “Havana Syndrome” moniker the media so adores. By 2017, more people, including U.S.  intelligence and military personnel, reported pain and tingling in the ears in other places, like China, New Delhi, Europe, and Washington, DC. The people in the Cuban embassy reported these debilitating neurological attacks and the Trump Administration called them “targeted attacks.” Those evil Cubans or Russians or Somebody had a secret, powerful “sonic weapon” to harm the Good Guys. Panic ensued. Fifteen Cuban diplomats were expelled from Washington, and most of the U.S. staff was withdrawn from the embassy in Havana. Five years later, more than 200 U.S. Government officials were claiming the effects of what came to be known as the “Havana Syndrome.” President Biden signed a bill which compensated the victims.  The victims of an affliction which, up to now, has no known cause, but has generated a wide variety of theory and pearl-clutching speculation about not just targeted attacks, but targeted attacks by a microwave weapon wielded by hostile foreign powers—Russia, in particular. In 2018, the Journal of the American Medical Association (JAMA) published a study of the 21 diplomats, led by Douglas H. Smith, Director of the Center for Brain Injury and Repair at the University of Pennsylvania. Smith and his team found signs of brain damage but no signs of impact to the patients’ skulls—a condition they called “immaculate concussion.”

The “sonic weapon” theory was trashed and recording of the supposed sound turned out to be from an especially loud species of cricket. Smith said that at first, there was rampant skepticism, “and everyone now agrees there’s something there.”

OK, but what is that “something”? Microwaves? In 2020, the National academy of Science offered a theory based on the Frey effect. In the early 60s, Allan H. Frey, a neuroscientist, documented that microwaves could “trick” the brain into hearing sounds that didn’t exist. Of course this wooly speculation set off an arms race between the U.S and Russia for mastery of microwave weapons. I can’t even master the tricky buttons on the one in my kitchen, but no matter—Science speculated and governments spent the money. But through it all, no definitive parameters have been established on this phenomenon. But it’s not the first time. These cases of hysterical contagion, mass delusion, mass psychosis, are infamous for their quirkiness and resistance to the attribution of obvious scientific causes (for that’s where we all go for answers now—not religion or philosophy, or even common sense). And that string of mysterious sonic “attacks” which began with, and caused, the headlines out of Havana was not a stand-alone sort of event—not here in the U.S., or worldwide.

For instance, The Meowing Nuns, from the middle ages. A nun in a French convent began to meow like a cat. This behavior eventually spread to all the other nuns in the convent, who began—every afternoon—to all meow together as a group. The surrounding Christian community was, to put it mildly, astonished, disturbed, and horrified. Soldiers were called out and the meowing nuns were beaten until their feline impressions ceased. Then there was the Pokémon panic of 1997, when episode 38 of the widely popular Japanese anime flashed across the nation’s TVs. The moment of Pikachu’s electric attack was streamed at 6:51pm, and by 7:30, over 600 children were in the hospital with the typical symptoms of epilepsy: seizures, breathlessness, nausea, vomiting, blurred vision, and general malaise. The media jumped in, reporting the cases and replaying the sequence, creating more cases of the same severity. It’s estimated that over 12,000 children were involved—only a small number of whom had genuine photosensitive epilepsy. The rest were the victims of mass hysteria.

In 1962, a mysterious illness broke out in a dressmaking department of a U.S. textile factory.  The symptoms included nausea, vomiting, dizziness, and numbness. The word was that there was a bug on the factory whose bite caused the illness—and the contagion spread. Eventually, 62 workers reported symptoms, some of whom were hospitalized. Enter scientists and experts from the company and the U.S. Public  Health Service Communicable Disease Center, and it was concluded this was a case of mass hysteria. No evidence of a bug which could cause the symptoms, but it was also speculated that anxiety was the culprit. The stress level was high as the plant was newly opened and organization was poor, added to a very busy work load.

Within the U.S. government, and beyond to the legion of experts consulting, commenting, and pontificating, there is disagreement as to the cause of Havana Syndrome. Arguments range from evidence of a “pulsed weapon from a hostile power” to “nothing to see here, folks.” The CIA has appointed a “senior official” has been appointed to head a task force investigating this putative illness—the same man who directed the search for Usama bin Laden. One wonders how a SEAL team will engage an electromagnetic pulse—should it find one. Some just cannot resign themselves to discounting or ignoring the sneakiness and evil genius of the Other.

If this all shows anything, it is that the human mind is a fantastically powerful, richly potent, meaning-making machine. The United States has never appreciated Cuba—its culture, history, and existence, from at least the Monroe Doctrine in 1823, to the Spanish-American War of 1898, to Fidel (and now Raul) Castro. And so the ghosts multiply as the information tsunami batters the Western Mind’s coastline as if it were Thailand or Tonga, creating the necessary conditions for illness, mental perturbations, and another round of fear, anxiety, and stress: more ghosts to come.

If you enjoyed this take on Havana Syndrome, consider supporting us and get patron-only content on our Patreon page. This will help the growth of this site, the automachination YouTube channel, and the ArtiFact Podcast. Recent episodes include a survey of photography from Josef Sudek to Laura Makabresku, an examination of Abstract Expressionism as depicted in Kurt Vonnegut’s Bluebeard, and a debunking of Internet sciolists such as Jordan B. Peterson and Christopher Langan.