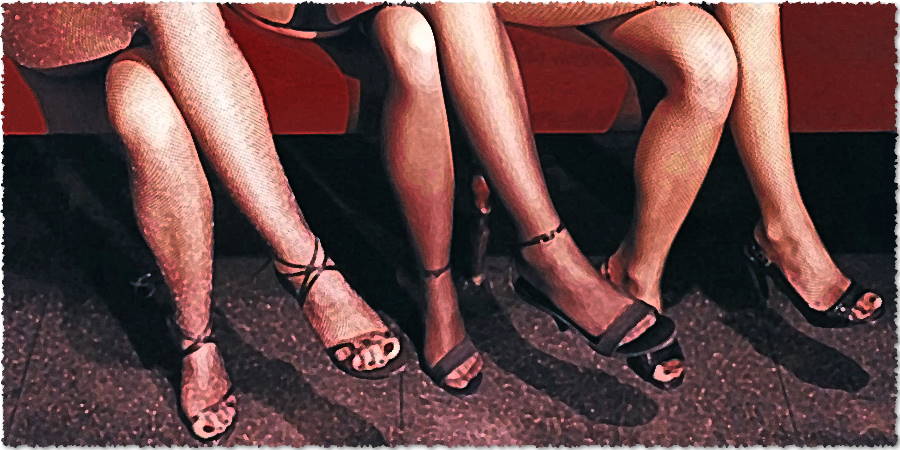 People—even the poorest most downtrodden of us—have one thing of value with which to bargain for food or shelter or a pretty trinket or a fancy dinner for two at some high-end bistro, or maybe for their very lives. It’s a commodity that needs no stock broker or bank vault or coin purse. In  fact, money and cars and stuff are treated with more respect and care than items of barter: their bodies. And bargaining with their bodies for basics, for extras, for salvation and groceries, for safety and security, produced—for women as well as men—a whole range of policies and emotions, a wide swath of anger, and apoplectic reactions to the merest idea, even the slightest suggestion, that prostitution should be legalized.

The arguments against legalization of sex for money (or is it money for sex?) mostly bunch together in just a few main categories: health concerns, legal  problems, safety issues, and the big one—the one which overlaps and underpins most of the others—morality.

Health concerns are often mentioned in connection to the sex trade. It is argued that legalizing prostitution would lead to regular health checks, perhaps medical insurance. Toulouse Lautrec’s painting, “Rue de Moulin: Medical Inspection,” shows us this idea of inspection was already obvious in the 19th century. But some arguments against the idea of legalization are that health tests are unreliable, they take too long to result in definitive diagnoses, and one I really smiled at:  thinking that health testing would prevent disease is like thinking pregnancy tests prevent pregnancy, which is as flawed an analogy as one could find, since both kinds of tests are not taken to prevent anything, but to see if anything happened. In both cases, action of some kind would be taken if the tests were positive. Health IS a concern, but maybe OSHA could open a cubicle in their main office for this. In any event, if prostitution were to enter the mainstream consciousness of society, all the concerns of health and safety would have to be addressed.  Admittedly, current health and safety issues of non-sex workers aren’t being addressed very much now, but at least the idea of providing health care for prostitutes would always be a legitimate policy matter for governments to address.

Trafficking is truly serious, and sometimes deadly, and if prostitution ever becomes as normal as stations gouging drivers anytime the wind blows the wrong way, then it needs to be addressed.  The damage trafficking does is violence; there is no seduction or sweet music or roses. There is no burgeoning bank account to fall back on when leaving the profession. There is pain and terror and fear. This happens right this moment, even absent legalization, so the argument is that such violence would only increase if prostitution were legal, since the society would have given notice that the “product” is now more readily available and this would increase the incentive to produce more of it. Trafficking’s main problem, at bottom, is that it is forced, and forced people are prone to vicious punishment to ensure their cooperation (the beatings will stop when you are willingly trafficked). IF (and it’s a big “if”) prostitution were to become legal in the U.S., this is one more capitalistic item on the things that need to be redressed. And being legal, it would—at the very least—put the elimination of it on the list (already a very long one) of doable activities, though maybe just as probable as it already is (or isn’t).

Sex work is a dangerous business for some and a lucrative and fairly benign one for others. If you are an “escort” in a well-established niche of high-end customers, customers who cannot take the chance of improprieties which might lead to a damaged reputation, a loss of stock options, or federal prison, you are choosing to have sex for more money a year than teachers make. If you are standing on a corner at night in a cold wind, dressed in less clothing than the vacationers on a Malibu beach wear, in a part of town the cops only enter with sweaty palms,  and your working stroll is a trip through enemy territory, then truly your choices are limited and your time may be short. It would be safer if these street ladies could take full advantage of the perks capitalism has to offer, with dedicated areas for them, well-lighted, warm, patrolled by law enforcement, and covered by health insurance. Sex work is dangerous now, demand is high, abuse is a given, so our laws must protect, not punish—it’s a premise capitalism must learn to truly be effective and welcome.

Almost every argument against the legalization of prostitution pivots on the theme of violence:  it is violence done to women and must be suppressed, punished, completely eradicated, as if no woman EVER gave her body to others—or had her body given to others—in the whole history of humankind. Yet there was a time, in U.S. history at least, when prostitution was not a crime—or at least more tolerated. Here is a part of a little ditty from early San Francisco:

The miners came in forty-nine,
The whores in fifty-one;
And when they got together
They produced the native son.

From New Amsterdam to the Gold Rush, history has identified women, who made all, or some, of their earnings selling sex, as some of the first women in early American settlements. In 1721, there were fewer than 700 men (excluding slaves) in the whole colony of Louisiana. The French government sent 80 women there in hopes of encouraging marriage and hoping the settlers would leave the Native American women alone. Many of the women sent over, however, had been serving time in prison for prostitution, and discovered new-found freedom in the sex trade, more freedom than marriage would afford them. San Francisco’s Barbary coast was famous (or infamous) for its wide variety of women from many parts of the world. The “Red Light District” is an American invention; that red light was used by customers (railway workers) in Ohio (first mentioned in print in 1894), who placed their work lanterns outside the places they met prostitutes so their bosses could find them if they were needed to go back to work. Storyville, in New Orleans, was the most realized such district in the U.S., and that is just the tip of a very large iceberg. To think that even draconian laws will eliminate this activity is thinking that pushing a beach ball under the water will keep it there, out of sight. The human body has worth, of course, but not just that Hallmark-movie-of-the-week kind. Clans, tribes, whole nations, have been united by the promise and gifting of sex; business deals have been negotiated with it; spies have it their toolkits; rent is paid, kids are schooled, and Sex for Something is still with us.

But is it just sex for money we are talking about, angry with, fussing over? Sex for money is considered by many as “wrong,” but Sex for Anything Else is sometimes tolerated, admired, condoned—or just plain ignored? And it has been around for much, much longer than history has recorded so why is it wrong? Certainly, there is the religious component and certainly, there is genuine humanistic concern, but as much as sexual activity—as irruptive and revolutionary and genetically wired into the human race as it is—and sexual imagery have become more tolerated in our world now, can there be any doubt that we, as a society, must deal with this ever-present disturbance in the Force?

If you enjoyed this piece, consider supporting us and get patron-only content on our Patreon page. This will help the growth of this site, the automachination YouTube channel, and the ArtiFact Podcast. Recent episodes include a breakdown of Elizabeth Barrett Browning’s Aurora Leigh, a dissection of Kurt Vonnegut’s classic novel, Galapagos, a philosophical look at kitsch, aesthetics, and NFTs with UK painter Ethan Pinch, and a long discussion of photography from Alfred Stieglitz to Fan Ho and Vivian Maier.