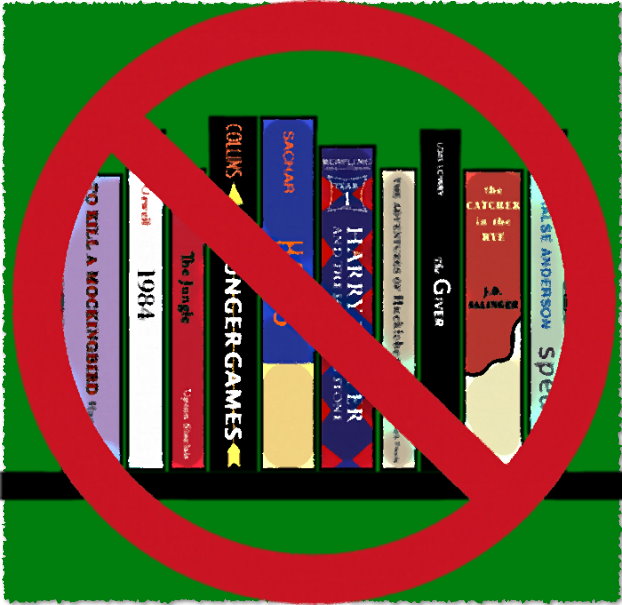 Eliminating books by burning or banning them isn’t just about getting rid of the physical objects, and not just the ideas, either. It’s also about what state of mind and heart the people and society who do the banning are in. Setting fire to the Qur’an or Huckleberry Finn tells us more about the people than the pages.

Turning books to ash or hiding them from sight is ongoing. And it is not a new phenomenon. In the 15th century, Mayan sacred texts were burned by Catholic Bishop Diego de Landa. He wrote that they were full of “superstition and lies of the devil…We burned them all, which they regretted to an amazing degree and which caused them great affliction.”

The early 20th century saw U.S. Postal Inspector and founder of the New York Society for the Suppression of Vice, Anthony Comstock, hot on the trail of vice, immorality, and obscenity. In 1873 he lobbied Congress to pass an anti-obscenity law titled “An Act for the Suppression in, and Circulation of, Obscene Literature and Articles of Immoral Use.” He is credited (if that’s the correct word) with the burning of fifteen tons of books. These included Walt Whitman’s Leaves of Grass, anatomy texts for medical students, and especially anything related to providing women information on contraception. “Books are feeders for brothels,” he declared. One cannot, of course, overlook the Nazi contribution. As soon as they came to power in Germany, books began turning from paper and ink to flames and smoke. On May 10, 1933, there was a nation-wide event which took place across 34 university towns. Nazi-led student groups burned books which propaganda minister Joseph Geobbels deemed “un-German”, including works by Helen Keller, Jack London, Ernest Hemingway, and scores of Jewish writers, not the least of which was Heinrich Heine, who wrote, presciently, “Where they burn books, they will also ultimately burn people.”

Then there are the tales of the boy wizard, Harry Potter. There was the 2001 bonfire by a church in Alamogordo, New Mexico (where some Ouija boards were thrown in for good measure), a 2003 burning by pastors in Michigan, and a slashing of the books in Maine (the five pastors who were poised with matches couldn’t get a bonfire permit). In all these incidents it was claimed that the series promoted sorcery and witchcraft. Of course, burning books can’t be mentioned without reference to Ray Bradbury’s Fahrenheit 451, wherein books, their content, and the people who have them were State enemies. But burning books is not just a grungy relic of the past.

In July of 2014, two Cleveland DJs organized a Fifty Shades of Grey burning event. Calls to the station complaining about the book prompted the event. Only about 25 copies were torched; local firemen came to ensure the safety of the burners (Shades of Bradbury?) The book in question is not very high on the literati’s list of Horrible Crimes, and it is not illegal, per se, to burn a book in the U.S.—First Amendment and all that—one just needs to be aware of any local fire ordinances and/or local weather and vegetation conditions. The symbolism is, of course, another—and ugly—matter. Pastor Terry Jones burned a copy of the Qur’an at his Florida church in May of 2011, and he threatened to do the same on the anniversary of the attack on the World Trade Center. The torching never happened, but did inspire similar events in Tennessee and Kansas—a threat which likewise inspired protests in Kashmir, resulting in 13 civilian deaths. Yes, Ideas which are snuggled inside books have power; they can evoke fear and disgust and rage. And sometimes, those ideas can cause a real spike in the public psyche—such a time is now.

So, if what is in a book bothers you, why burn it (so medieval!) when you can ban it—relegate the offending material to a place outside the VERY short memory of our modern society, distant from examination? And banning is very much on the rise, with the two most vexatious subjects for purity watchdogs seeming to be Religion and Sex, with all the offshoots, ramifications, and baggage such subjects bring to any conversation. In Oklahoma, a bill was introduced in the state senate prohibiting public school libraries from housing books dealing with sexual activity, sexual identity, or gender identity (at this point, the reader may be already mentally listing books she has red and loved that fit into this category, and shaking her head—for me, I immediately thought of Virginia Woolf’s Orlando). In Tennessee, the McMinn County Board of Education banned the Pulitzer-Prize winning graphic novel “Maus” from an 8th grade module about the Holocaust due to nudity and curse words. In fact, in the fall of 2021, the American Library Association reported an “unprecedented” 330 book challenges, with many challenges containing several books. Parents are in an uproar, school boards feel threatened, federal officials are issuing warnings of “terrorist activities,” and dire Cancel Culture warnings of impending national collapse are rampant.

Cancel Culture is but a new (and severely overused) term for that impetus among societies which seems to impel the attempt at suppression of ideas, as in the time of the Qin dynasty (221-206 BCE), wherein a massive burning of most of the Confucian classics occurred. For a more modern instance, former New York governor Andrew Cuomo claimed that allegations of sexual misconduct and a toxic workplace which led to his resignation were examples of cancel culture, and former president Donald Trump blamed this culture for just about everything. But that doesn’t mean there isn’t something going on. The Daily Beast notes a “measurable uptick,” since 2014, “to get people fired, disinvited, deplatformed or otherwise punished for speech that is—or would be—protected by First Amendment standards.” The “would be” part is due to the fact that the 1st Amendment does not apply to private companies, so Whoopi Goldberg’s suspension from “The View” was perfectly legal; her expressions about the Holocaust would have been protected had the 1st Amendment been in force. Professors and teachers find themselves being careful to say nothing to get fired or suspended—and some workplaces have become “wokeplaces.”

From burning and banning books to deplatforming people and groups, from the rise of “watchdogs” who are censors in haughtier, self-righteous clothing (and who watches the watchers?), to dictators killing people who have the wrong ideas about some workers’ paradise, this trend seems to be picking up speed. It is said that whatever makes it to the internet (and that is a LOT of stuff!), never dies, that it’s out there forever, ready to be unburied by the curious—but curiosity fades after time (sometimes a very short time). The ideas may still be out there somewhere, yet with no one to find them.

So the fight goes on. Ideas are promulgated daily, even hourly, and they are still battered and buried and banned by someone who doesn’t like them. U.S. publishers estimate that 825 million or so books were sold in 2021, up almost 9% from the previous year, but PEW data shows Americans actually read about the same number of print books as previous, increasingly preferring audio books and e-books. So the ideas are out there; they keep coming; some die a natural death, some die of loneliness, some die as society and science move ahead. If the trend toward the electronification of ideas continues while the education of American children in critical thought continues to decline, ideas are in for more attacks. So it seems our duties as citizens, as humans, are to keep generating ideas, keep thinking about them, keep evaluating them—and pass all that on to the generations to follow.

If you enjoyed this piece, consider supporting us and get patron-only content on our Patreon page. This will help the growth of this site, the automachination YouTube channel, and the ArtiFact Podcast. Recent episodes include a survey of photography from Josef Sudek to Laura Makabresku, an examination of Abstract Expressionism as depicted in Kurt Vonnegut’s Bluebeard, and a debunking of Internet sciolists such as Jordan B. Peterson and Christopher Langan.

More from Len Holman: The Ghost in the Machine: From Havana (Syndrome), With Love, Masculinity And Its Discontents, Working Girls, Morality, & Capitalism