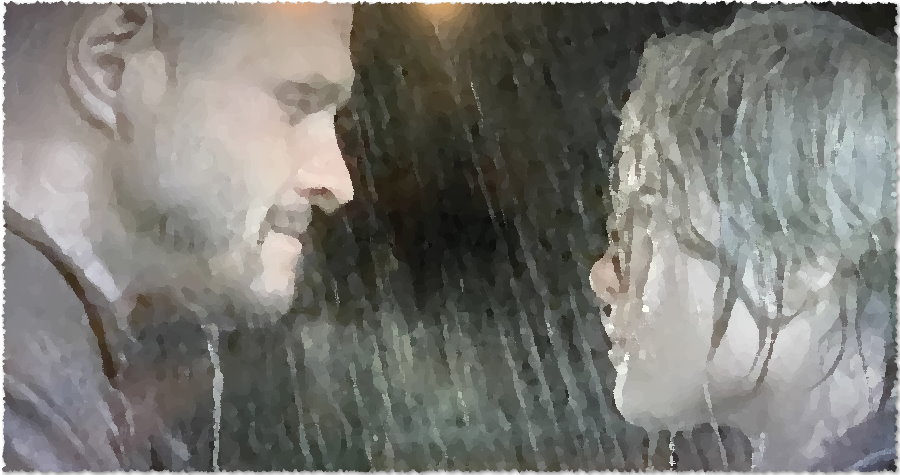 British cinema has had an unsatisfactory history – in its battles with censorship, and public morality, and the untenable economics of it all. You only need to look across the Channel to see what can happen when free of even a few of those constraints – you get a French new wave, or later, cinema of the extreme. That’s why films like Andrew Kotting’s This Filthy Earth aren’t made – because to be frank, nobody will watch them.

Derek Jarman struggled with similar problems, because for all of his technical expertise, his films never sated British appetites. His explorations of the texture of cinema might be a bit too continental. Andrew Kotting, an adherent to Jarman’s rampant style, has found something similar, because This Filthy Earth is an example of a movie going largely ignored by the country it concerns.

Maybe Kotting knew this, and that’s why he loosely adapted this story from a seminal French novel – La Terre, by Émile Zola. Loosely is operative, as the film attempts to translocate the themes Zola put forward through the characteristics only cinema can embody. Texture, montage, diaphanous images that fade into each other, all while stripping away the characteristics of its literary counterpart. This is to the film’s strength until its troubled third act, when it listlessly melts into weightless resolutions.

Overall, the film is a failure. This is why it’s interesting to talk about. The characteristics of success and failure in the arts are always slippery, but in This Filthy Earth you can trace quite easily the moment the film loses its edge – and that’s instructional. It gives more weight to the many successes it gets in the bank before the sad dissolution, ones that are an achievement of form.

The movie’s plot largely follows the book – two sisters, adapted from the original French to Francine and Kath, live a kind of meager sublime on their Yorkshire farm. Kath has a daughter, Etta, with a local toxic feller called Buto, who “tumbled her all summer” before leaving his bastard with her. Buto is the son of a disgusting derelict called only Papa, who holds Buto’s inheritance over him and his brother, the alcoholic called Jesus Christ by the locals. Papa’s sister, Armandine, is a local soothsayer type figure, and these wretched characters are imbued with that all important kernel of truth – portraits of the effect constant toil has on the human soul. In fact, most of the performances are superb.

Francine becomes sexually obsessed with Lek, a local Eastern European-bloc immigrant and tractor operator. He is an island in the sordid world the characters shamble around, good-natured despite mistreatment by the xenophobe local rabble, of which Buto is king. Buto marries Kath, who is all too willing, in order to get her land. He has eyes for Francine, who knows he’s a disgusting letch, but has no choice but to watch him become the man of the house. These themes erupt into the superstitious villagers being whipped into racist frenzy against Lek when rains batter the land and spoil their harvests. Lek is beaten by a baying mob and escapes, and the film draws to a meager end.

The value of the film is not in its plot, but in its attempts to capture through cinematic technique the experience of such a squalid life. The villagers are overlaid with diegetic sounds of cattle, a hark to Zola’s obsession with man as the animal. This theme bookends the film – in the beginning, Francine sexually stimulates a bull to breed her prized cow, and in the penultimate scene she does the same to Buto dismissively and with the same disregard.

There are talking heads style shots of villagers breaking the boundary of the screen and looking at the viewer, barking in the kind of inane drawl you get from real rurality. This grounds you in the culture and mindset of the characters, and provokes an experience of the uncanny, like being far outside of your own cultural comforts. One notable direct-to-camera is the circus-master Lardo, whose only trick is being obese, which the villagers find terrifically funny.

The landscape is harshly realised through the camera’s time-lapses of clouds traversing, and animal corpses falling freshly to the ground, blooming in golden fur, before turning to rot in a few seconds. The film is shot largely in digital, a decision often made to capture some morbid sense of reality, an association from home movies and local TV. Despite this precluding it in some critics’ eyes from real cinematic grandiose, the golden scenes of harvest season are a feast for the senses, shot handheld and quickly cut, making it almost have the texture of a dream.

British underground cinema is notable for its dismissal of the romantic or the sentimental. We are shown in detail characters pissing and shitting all over the landscape, the craven figure Armandine squatting to make water in a ramshackle churchyard. We see Papa’s foot-welts drained of pus by the same with a filthy needle, and watch said foot swell and become misshapen due to infection. The film, like Zola, tries to assert the relation of humanity and the dirt we rose from.

The sound design, like I touched on above, is the real treat of the movie. The winds underscore everything, as well as the patter of listless rain. The best soundscapes are whenever the characters are given to cultivating nature, the wet thwack of scythes stemming wheat and the dry clatter of Buto assembling a stone wall. The creaking of old equipment for harvest, and iron on stone.

Where the movie fails is in the conclusion to all of these ambitious techniques and themes. Watching the characters overcome by a vicious flood in torrents of rain can’t help but feel like a rushed end. The momentum that has been built up in the anticipation of Buto and Kath’s marriage is defeated by too long spent watching the aftermath, and watching Francine’s misery. Lek’s eventual escape feels hollow, and Francine’s refusal to go with him to elsewhere by saying ‘it’s all I’ve got’ seems like something that was supposed to resonate – but it doesn’t.

It’s a shame, as This Filthy Earth could’ve been resolved more conclusively by only following the finale of the novel. Kath and Buto would’ve conspired to kill Francine – now pregnant from Lek and in line to inherit the land – letting her fall onto a sickle in their field. You can only wistfully think of how the movie’s visual approach could’ve captured the futility of impoverished rural conditions, watching Lek drive by her grave on his tractor, before we watch nature erode it away in one last time lapse and give rise to new grain.

As it stands, the film is a troubled and interesting experiment. Taking Jarman’s approach of rugged and arthouse cinema to a classic story worked phenomenally until it didn’t – maybe Andrew Kotting could have learned something from Peter Greenaway. Whether it was the screenwriters – Kotting himself and panel show comedian Sean Lock – wanting to focus on the toppling of the church by the ignorant villagers as a religious critique, or just not being sure how to conclude something, it leaves a sour taste after such a sumptuous offering.

Almost comically, the characters who were rich in cinematic implication of their personalities begin to systematically shout their driving neuroses, which is one notch beneath turning to the camera with a single tear rolling down their cheek. Particularly the local priest screaming “I’M BETTER” as his church is set about. What could you possibly be implying, Kotting, you sly sea devil?

It would’ve been interesting to see Andrew Kotting allowed to refine his ouvre with subsequent pictures, but the role of the art-house creative in such a mundane climate is a tenuous one. He made one further fiction in France, but has been unable to procure funding for anything here except documentaries, ala his first picture, Gallivant.

And British cinema endured, only excited for the next Ben Wheatley pandemic picture, or Ken Loach fable about the queue at a food bank, sadly floundering in its own normalcy. A death without seeds.