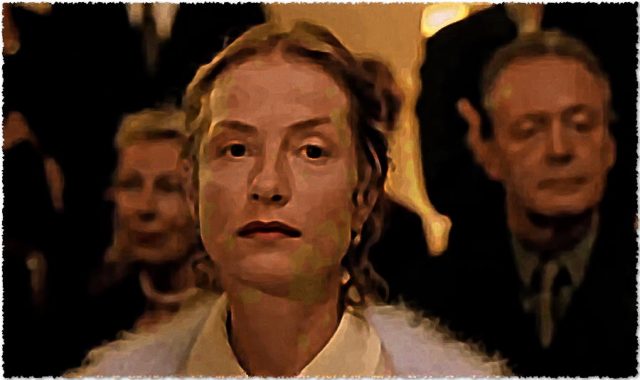 Few films successfully essay a troubled individual without resorting to sentiment. It is a difficult line when the subject is uncomfortable with closeness and yet the audience continues to act as voyeur. In Michael Haneke’s The Piano Teacher, Isabelle Huppert plays Erika Kohut, a respected piano teacher within a Vienna Conservatory. When we witness her publicly, she is confident and cold. Her students revere her. Her colleagues admire her. ‘A wrong note in Beethoven is less offensive than mangling the spirit of it,’ she says. But there is something deeper going on, and no, I am not referring to the sex parts. Rather, Erika suffers from pathological envy. Her mother, with whom she lives (as well as shares a bed) informs her daughter that she mustn’t let anyone be better than she. ‘If you want your pupils to have a career over you, no one must outdo you, my girl.’

These words are not to be overlooked, as we witness Erika’s contempt towards any pupil who might outshine her. She knows just how to break them down, too. No, she doesn’t scream like Fletcher in Whiplash, but rather uses their self-shame against them. Huppert is excellent in this role, as her austere face alone is enough to reveal her resentment. But it doesn’t stop there. When a young, handsome student named Walter Klemmer (played by Benoît Magimel) wishes to enter the Conservatory, she votes against him when her colleagues recognize his talent. They, however, override her decision and he becomes her student. She eyes him from afar and it is clear he idolizes her. Yet her knowing this is still not enough. When one of her timid female students (named Anna Schober) is overcome with stage fright, Walter goes to comfort her. As result, Erika silently seethes with envy. She cannot take it, and so she disappears into the coatroom, wherein she finds a glass and breaks it, dumping the broken shards into Anna’s coat pocket. One can only imagine what happens when Anna inserts her hand. […]