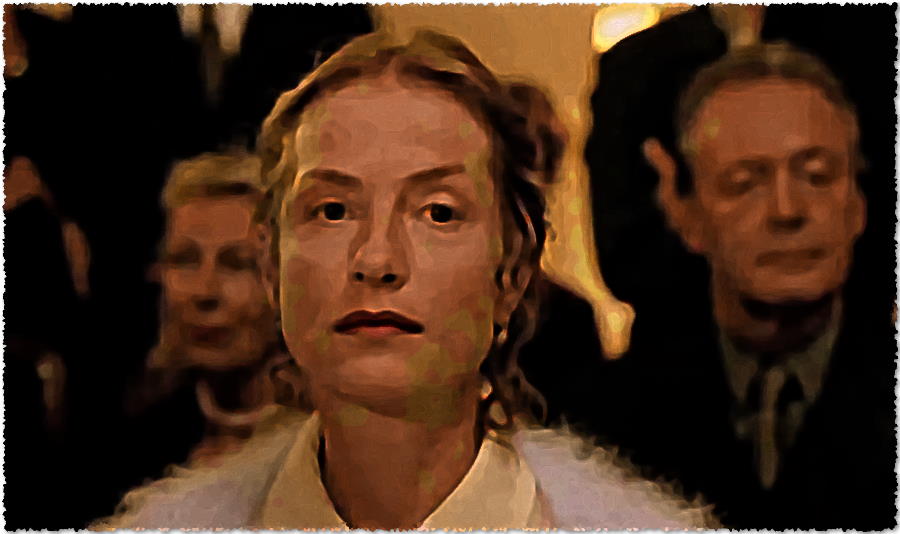 Few films successfully essay a troubled individual without resorting to sentiment. It is a difficult line when the subject is uncomfortable with closeness and yet the audience continues to act as voyeur. In Michael Haneke’s The Piano Teacher, Isabelle Huppert plays Erika Kohut, a respected piano teacher within a Vienna Conservatory. When we witness her publicly, she is confident and cold. Her students revere her. Her colleagues admire her. ‘A wrong note in Beethoven is less offensive than mangling the spirit of it,’ she says. But there is something deeper going on, and no, I am not referring to the sex parts. Rather, Erika suffers from pathological envy. Her mother, with whom she lives (as well as shares a bed) informs her daughter that she mustn’t let anyone be better than she. ‘If you want your pupils to have a career over you, no one must outdo you, my girl.’

These words are not to be overlooked, as we witness Erika’s contempt towards any pupil who might outshine her. She knows just how to break them down, too. No, she doesn’t scream like Fletcher in Whiplash, but rather uses their self-shame against them. Huppert is excellent in this role, as her austere face alone is enough to reveal her resentment. But it doesn’t stop there. When a young, handsome student named Walter Klemmer (played by Benoît Magimel) wishes to enter the Conservatory, she votes against him when her colleagues recognize his talent. They, however, override her decision and he becomes her student. She eyes him from afar and it is clear he idolizes her. Yet her knowing this is still not enough. When one of her timid female students (named Anna Schober) is overcome with stage fright, Walter goes to comfort her. As result, Erika silently seethes with envy. She cannot take it, and so she disappears into the coatroom, wherein she finds a glass and breaks it, dumping the broken shards into Anna’s coat pocket. One can only imagine what happens when Anna inserts her hand.

See, Erika has a problem. Some might label her with a personality disorder, such as malignant borderline or anti-social. She is fascinated by sex but only as a voyeur, never a participant. She does not like intimacy. (In fact, in one attempt at it, she vomits.) Eventually, she and Walter have an exchange in the bathroom. She stimulates him and then forbids him to ejaculate. She then informs him that she will write him a letter, detailing what she would like him to do to her. And Walter, still very much infatuated by his teacher, obliges. He doesn’t know what we know—that Erika frequents the porn booths and pulls semen-laced tissues out from the trash, only to then hold them up to her face. Or that she visits the drive-in theaters to spy on those who might be in midst their sexual congress. In one scene, she proceeds to squat and urinate beside the couple’s car. What is all this? Just what is wrong with her? And why does she share a bed with her mother?

This is normal within Erika’s world, who also engages in private self-mutilation. And dear Walter—he only longs to get close to her, but any tender affection is rebuffed. He just wants to talk, but Erika insists that he read her letter. One night he does—he reads it aloud before her. In it, she details her desire to be tied up and beaten while her mother is locked in the other room. His reading is perfunctory, as he seems to still wish for a politeness between them. ‘This is very sick. You need help. You repulse me,’ he tells her, before leaving. Following his rejection, Erika sexually attacks her mother in the same bed, before sobbing like a child. Is this codependency? Her behavior is quite troubling. Yet Michael Haneke manages to make this world seem ‘normal’, even though most will look at Erika with scorn.

The Piano Teacher (Die Klavierspielerin) is based on a novel by Elfriede Jelinek. The title does not shy away, as we witness both sides of this person—the public persona’s revered professor as well as the privately disturbed sexual masochist. One might wonder what one has to do with the other. Well, nothing and everything. On one hand, Erika wishes to be dominated, but only at her command. Even in midst of her supposed submission, she remains the one in charge. When I first watched this film, I was also watching Isabelle Huppert for the first time. Afterwards, I sought as many titles with her as I could. Her characters are often isolated in some way or other, and she projects an intelligence reminiscent of Gena Rowlands. Even in midst her vulnerability, a wisdom still thrives.

Eventually, Walter arrives at her flat one night. Is he angry or merely acting out her fantasy? He kicks her and she bleeds. The scene is disturbing but one will wonder who the real victim is, here. Many have said he rapes her, yet I disagree. No, this is not a rape apology or a defense of domestic violence, but if the headstrong Erika didn’t want it to happen, wouldn’t she have objected otherwise? Is he not giving her what she wanted? Once again, who is in control? A clue is when Erika sees Walter on the night of her performance (she is filling in for Anna Schober, who is still suffering from her injured hand) and her face, still lingering with bruise, lights up. She’s been waiting for him. She wants to do it all again. Yet when he nonchalantly brushes past her with his crowd of friends (‘My respects professor. I can’t wait to hear you play,’ he says), we sense her self-loathing and loneliness. In her clutch purse, she carries a knife. By now, viewers will know who receives the brunt of her pain.

But perhaps the most telling is that no one, and I mean, no one, aside from her mother and Walter, seems to recognize her trouble. (And even they merely come to accept it.) In the final scene, Erika stands with empty expression. Bruises still linger and no one questions her. No one seems to pause and inquire if she is alright. It is clear that Erika lacks the means to make human connection. Yet rendering the music of others—this is her only human contact. ‘You speak of things as though they are yours. That’s rare,’ Walter says upon their first meeting. Walter clearly has insight that goes beyond average ‘fanboy’ worship and she, in many ways, remains the child.

Michael Haneke is no stranger to otherwise uncomfortable subjects (Funny Games he made twice). He chooses to not look away. Any why should he? Some subjects should most certainly be shown and not implied. We don’t know why Erika is this way, but then again, why is anyone? I will say, however, that each time Erika and Walter sexually engage, it is nothing short of pitiful. It is awkward and uncomfortable, but only for him. Is she melodramatic? Of course. But that is our perspective. For Erika, she knows no other way. The Piano Teacher’s troubling topic reminds me of something Rainer Werner Fassbinder would wish to shoot through a dingy lens under the guise of mediocre humor. Michael Haneke relies on no such false pretenses—we ultimately see what he believes we need to see. Pain is what Erika knows. It is familiar, comforting. She isn’t able to shy away from it and so why should we? There is a reason for her white blouse in the final scene.

If you enjoyed this review of Michael Haneke’s The Piano Teacher, consider supporting us and get patron-only content on our Patreon page. This will help the growth of this site, the automachination YouTube channel, and the ArtiFact Podcast. Recent episodes include a comparison between Thomas Pynchon’s Gravity’s Rainbow and Kurt Vonnegut’s Slaughterhouse-Five, a survey of photography from Josef Sudek to Laura Makabresku, and a discussion of Hermann Hesse’s classic novel, Steppenwolf.