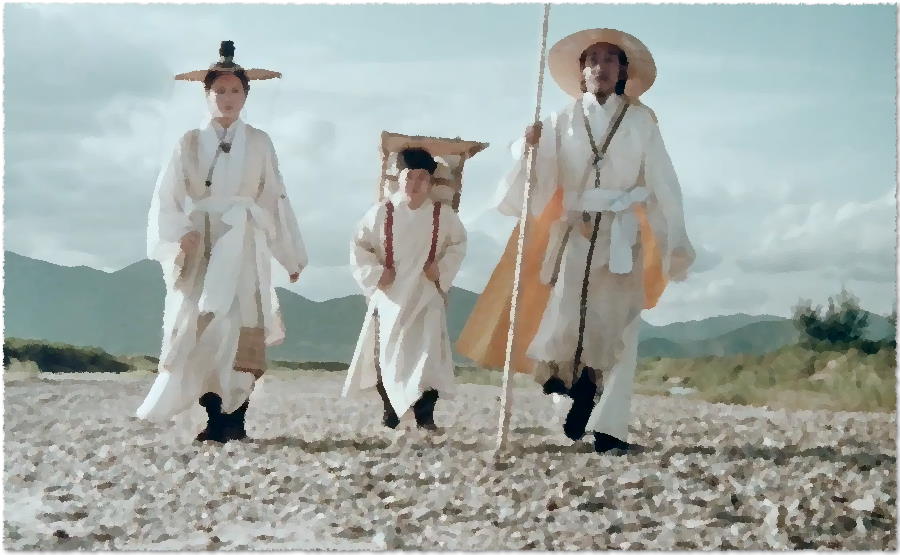 Allow me to preface by stating that not only is this my first time seeing a King Hu film, but also that I am not terribly familiar with martial arts films. While I spent a number of years watching Japanese samurai classics, they are not martial arts films. Martial arts cinema is primarily combat-driven, while King Hu manages to transcend many of the limits of the genre, ensuring Raining in the Mountain remains one of the better films within this niche.

The film takes place during the Ming Dynasty, within a remote mountain village where there is a monastery. Nestled within the deeply embedded forest, already something is amiss—the Buddhist principles of peace, the remote beauty, the places to where one can retreat and yet—perception is not reality. It is not long before we notice that those who inhabit this holy place are actually in competition—bargaining, bribing, betraying—all with their own individual agenda and form of marshaled violence.

The coveted item is a sacred handwritten scroll that is supposed to be worth a lot of money. How much exactly we don’t know, and nor does it matter. Individuals who were brought to protect the scroll are soon attempting to steal it for themselves, and so begins an affected display of the film’s well-choreographed combat, coupled with sensationalized sound and nature background. It’s not that the scroll itself is evil, per se; it’s just that it seems to cause everyone around it to become evil. However intended or not, the scroll merely is, despite how everyone goes on about it.

Feng Hsu plays White Fox, a concubine who attempts to steal the scroll. She manages to duck and hide at the proper moments, eluding capture. Or maybe none of the monks are very observant. That she is such a strong female protagonist is telling, given the story takes place within such a male-dominated culture. Yet her character is never developed beyond her plot-driven role (such as Lady Kaede in Kurosawa’s Ran), but there are moments where she reveals herself as someone frustrated and human. ‘I don’t like monastery food!’ she cries upon spitting it out. She grows bored and impatient and she wants to leave, but not before she can land her hands upon the sacred scroll.

Already one can see the simplistic storytelling of Raining in the Mountain. They have something and we want what they have. And so begins the physical battle of bribery, corruption and betrayal, albeit who is doing the betraying and corrupting all depends on which side you are on. I don’t suppose anyone really cares who wins or loses, as we audience members are merely along for the ride.

In one scene, a criminal (or rather, one who has been deemed a corrupted soul) decides to join the monastery in his quest for peace. This is seen as an act of humility, and thus the abbot declares him as his successor. ‘We need to have an outsider, so that there is no rebellion within,’ is his intention. Yet, clearly it does not work, as a slew of fighting ensues (much of it beautifully executed to King Hu’s well-choreographed direction) but the abbot’s impartial decision doesn’t seem to have changed anything. In fact, everyone is still angry and fighting.

Raining in the Mountain is restored from its original film version and is currently streaming on Criterion. It is worth the watch even if the story itself is not as deep as one might anticipate. As example, we never get much sense of the characters beyond their roles within—they come across as artifice, and the acting, at times, feels forced. But while the film is more dialogue heavy than one might expect, this is ultimately a simple story. I address this as a contrast to something like Kurosawa’s The Bad Sleep Well—a film that handles corruption marvelously, to the point that one feels the characters could walk off the screen. Same could be said of Seven Samurai. As contrast, Raining in the Mountain never reaches those highs.

It is always an experience to watch an older film long after a newer one. I recall the hype of Ang Lee’s 2000 film Crouching Tiger, Hidden Dragon. And although the film is pretty at times, I can’t remember what it is about. It was more style over substance, in other words. And in some ways the same can be said for Raining in the Mountain, albeit I find King Hu’s direction to be a richer experience than Lee’s film. (As a filmmaker, Lee does not impress.)

In one particular scene, a box of loose prayer beads is dropped upon a wooden deck, and in stooping to secure them, a group of thieving women instantly gather. They are distracted and occupied, and that the beads have fallen off their strings—these are individual prayers their hands are grasping at. O, the poetry therein. The humor. In another scene, a group of ‘bathing beauties’ are naked in a stream before the monks who are praying. We see the men’s prayerful eyes motion towards the women, but then, in a moment of embarrassment, they lower their gazes into their hands. Moments of humanness and humor are what distinguish this film from others within its genre.

Raining in the Mountain was released in 1979, and I noticed a flat realism to the screen. This is not a criticism, but rather, perhaps it is the nature involved, or at times the isolation. The colors carry a muted quality that one witnesses in life. Yes, at times grass is vibrant green but most often it is merely green. It goes on regardless. And this is how we typically see it.

Years ago, I was reading copious amounts of Japanese literature and one of those authors was Yusanari Kawabata. I recall his novel, The Sound of the Mountain, which involves the ideas of memory, perception, and dream. All are displayed through the metaphor of sound. The protagonist hears the world as a type of rumbling, which he believes arises from the mountain. This is his death, he thinks. All that is in common with Kawabata’s novel and King Hu’s film is that both works involve the word ‘mountain’, and also, perhaps, they share a melancholy – the ideas of death looming and our perception of it. Too often we covet because we believe ourselves are lacking. At the film’s end, the scroll is burned due to it having caused such violence and destruction. Or so they believe. But is it really about the scroll? Is it ever?

It is interesting to title the film Raining in the Mountain when in fact it never rains: not once in the film does this occur. But I suppose that’s the point. It doesn’t always have to rain to feel like rain. Raining can be melancholic yet also offer a place of peace. Peace and melancholy—the monastery setting within this dynasty seems somewhere in between. Save, perhaps the ongoing battles upon the mountain, where we never see rain.

More from Jessica Schneider: Lost Within a Maze of Ballet – “The Red Shoes” (1948), Revisiting Childhood Memory Within “El Sur” (Victor Erice, 1983),  Curtains on the Wall – The Poetry of Hazel Hall, The Risk of Too Much Pleasing: Billy Wilder’s “The Apartment” (1960)