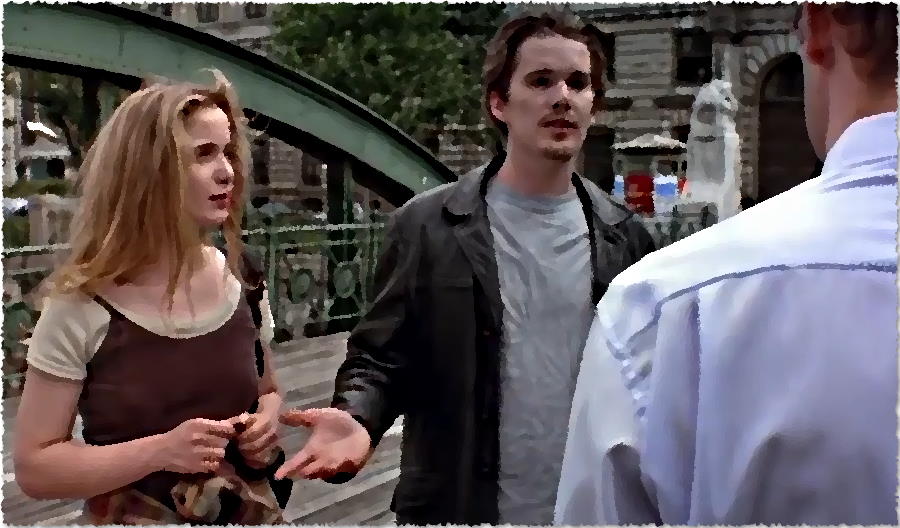 I recall my first moment watching this film. It would have been summer, 1995 after renting the cassette from Blockbuster. I worked my job, and late into the night I watched the film on VHS and felt myself brought to Vienna, wandering the streets with these two characters. Oh, and how I wished I could find a guy as cute and as deep as Ethan Hawke who, within this film, embodies the young, artistic girl’s fantasy. ‘I didn’t just go to Europe to read Hemingway,’ he tells Celine (Julie Delpy). ‘I came to be anonymous.’

How the story unfolds is this: Jesse (Hawke) and Celine (Delpy) meet on an Austrian train. Jesse purchased a Eurail pass with the intention of riding the rails until he could fly home. His trip to Madrid to visit his girlfriend (now ex) didn’t work out, and so now he just wants to be anonymous—a ghost. Likewise, Celine is a Parisian student who is returning from having visited her grandmother in Budapest. The two get to talking and they feel there is a connection. The dialogue is authentic and intelligent—a believable sort that artistic types would speak. Jesse convinces Celine to get off the train with him in Vienna to ‘check out the town’ until his flight leaves the next morning. She agrees. And that is the film.

There is no action but rather, small moments between. They visit a grave that belongs to a 13 year old girl, wherein Celine says, ‘I visited her at 13 and we were both the same age. Now it is 10 years later and she is still 13.’ What this film does is incorporate the concept of time, and with that, the longing that accompanies it. Jesse and Celine meet fortunetellers, actors, street poets, and bartenders. They blend in as everyone within this city that never seems to sleep. They acquire a bottle of red wine and then drink it in the park before deciding if they should make love. She says no at first—‘I don’t want to be some fantasy—meet some French girl on a train and fuck her and never see her again,’ she laughs. But then both relent and do so. They plan this night as their only night and accept that they will never see one another again. But then that changes at the end, when both admit that they do wish to meet up.

Possibly one of the most touching scenes is when morning arrives and we witness all the places they were, now abandoned. The church, the restaurant, the grassy field. Just where have those shared moments gone? Seeing these scenes in a morning light offers an otherworldly quality, as though this is what has always been. Before Sunrise is one of the best films that a young person should watch. Upon my first watch, so many of the ideals resonated with my 19 year old self. A couple years later, I rented it again, this time with a boyfriend. We watched together and when I asked if he enjoyed, he merely made fun of Ethan Hawke seeming ‘artsy’ or some nonsense. The conversations, the ideas, the feelings of wistfulness did not appeal to him. (We did not remain together for long.)

Richard Linklater is known for his poetic use of time. Within his films, time tends to pass slowly or quickly. Dazed and Confused, as example, takes place over a single night, as does Before Sunrise. Boyhood, however, jumps across multiple years quickly, wherein only those pinnacle moments are spotlighted. To give an example of the rich poetic dialogue, Celine tells Jesse:

The ending is powerful because as a stand-alone film, one cannot help but to feel the longing that Celine and Jesse do. Both decide to not exchange numbers and to not write (this was pre-Internet; now they’d just become Facebook friends). They both agree that this would be ‘too depressing.’ They wonder when they should next meet. Celine suggests five years. ‘Five years?’ Jesse responds. ‘Ok, how about one year?’ she suggests. ‘How about six months?’ he replies.

Thus, in six months, they agree to meet at the same train station on the anniversary of the day they met, which is June 16th (Bloomsday). Jesse will fly, and Celine will take a train. Nine years later, Linklater went on to make Before Sunset, where we come to learn that the characters do meet up—in 2004, this time in Paris. In the interim, life has taken them in different directions. Delpy, who appeared in Krzysztof Kieślowski’s film White, embodies a young woman in search of her dreams. This is the time when life is full of possibility—one is in her early 20s, it is summer, and those moments shared, now are devolved to memory.

While this is the first film within a trilogy (Before Midnight would emerge in 2013), at the time this film was released, no one could have known that. This is a great trilogy, but admittedly there is something lost when we learn what happens. Part of what makes this film so endearing is that we don’t know if they will meet again—and that is where the Romance lives. The wonderment, the possibility, the longing.

I have watched many clips from Before Sunrise throughout the years, notably because it has remained such an important film in my life. I recall seeing a trailer where the 1990s song ‘Into Your Arms’ by The Lemonheads is playing, yet nowhere in the film does this song appear. At first, I thought this was a bad choice—why not get something more classic that leaves us in a sort of timelessness? But then, I came to realize how effective this song was. Linklater did not hesitate to set the film in the ‘90s because the ideas and the location are timeless enough. While most pop culture is avoided, it isn’t completely, and nor should it be. This was a specific time and place, and it will forever remain. Even the characters, despite this moment where they are 23, they will always be 23 and the day will always be June 16, 1994. Time is the ultimate wistful dissolve. The same can be said of Celine and Jesse while wandering the Viennese streets.

If you enjoyed this review of Richard Linklater’s Before Sunrise, consider supporting us and get patron-only content on our Patreon page. This will help the growth of this site, the automachination YouTube channel, and the ArtiFact Podcast. Recent episodes include a comparison between Thomas Pynchon’s Gravity’s Rainbow and Kurt Vonnegut’s Slaughterhouse-Five, a survey of photography from Josef Sudek to Laura Makabresku, and a discussion of Hermann Hesse’s classic novel, Steppenwolf.