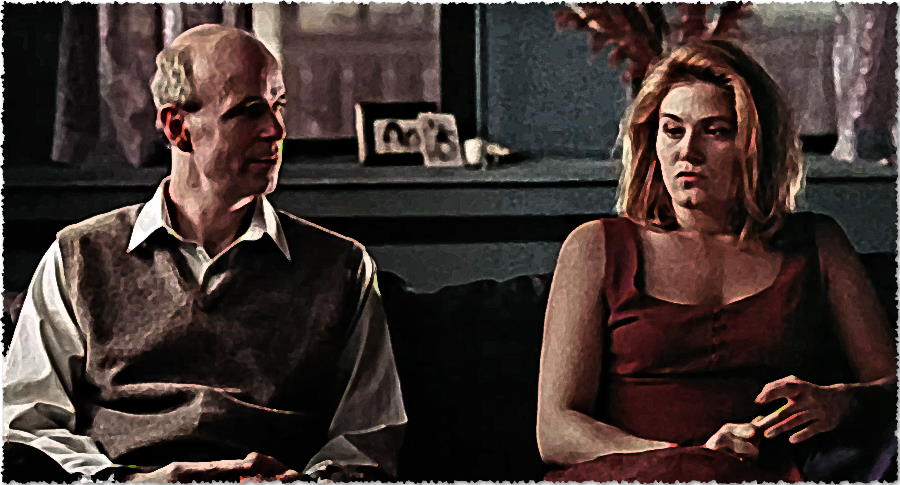 This is a small, understated film about power. One particular power dynamic, and the exchange(s) therein, but specific enough to be drawn out across many relationships and individuals who attempt to justify their own existences to themselves and to others, and end up misleading, and being misled, by said justifications.

What Happened Was… stars Tom Noonan and Karen Sillas, and was written/directed by Noonan based on his Off Broadway play of the same title. Having been only marginally aware of Noonan from his appearances on TV shows like The Blacklist and 12 Monkeys, I knew he cut a striking figure (who can forget such an imposing, nigh-skeletal frame?) and wasn’t a bad actor, but came away from this film doubly impressed by his acting skills and newly appreciative of his talent as a writer. And as a director – an all-around artist, really.

Of course, Noonan’s been around a long time, and has starred in some big-name flicks (Manhunter, Robocop 2, Synecdoche, New York among them), with a credible background in the theater, as well. In What Happened Was…, though, Noonan really asserts himself as a legitimate auteur – and in his debut, no less! The film won a few prestigious awards in the wake of its premiere, including the Grand Jury Prize at Sundance, but since then has sunk into relative obscurity. I’m thankful to the Criterion Channel for streaming it, as I’d never even heard of the movie before I discovered it by chance on the site.

It’s a simple premise, in a simple setting, and its function as a two-hander gives little room for Noonan and Sillas to lose focus. Jackie (Sillas), an executive assistant in her thirties, prepares for a dinner-date with a paralegal (Noonan) at their law firm. Her apartment in Manhattan is spacious enough, but cluttered, and of haphazard design, with a dressing room in the corner and no bedroom. As she flits around, getting things ready, the camera zooms into surrounding apartments, offering glimpses of the life around her – a shadowy man watching a disturbing horror film, a faceless couple sitting across from each other. These seem like intimations of what is about to occur, especially when Michael arrives, with his intense and probing gaze.

Is he a killer of lonely, lovelorn young women, as the silhouette in the nearby apartment might suggest? There are moments when the two characters are staged in such a way that the viewer senses impending danger, or how a certain flow of editing might lead the viewer to predict Michael pouncing on Jackie when her back is turned. Things seem quite off-kilter from the get-go, with Jackie’s entrance into the film being a reflection from her apartment window, indicating that what is shown won’t be necessarily what truly is.

Jackie clearly is enamored with Michael, who seems to be an awkwardly charming, sensitive type who enjoys lambasting the partners at the firm for their heartlessness and jerkish behavior. Their dialogue is circuitous, joke-infested, halting, repetitively inquisitive, and quite accurate for co-workers who are meeting outside the office for the first time, especially co-workers who seem romantically interested in each other. It’s riddled with small-talk whilst continually burrowing for depth.

It is revealed that Michael is a writer, and that he’s collecting dirt on the lawyers at the firm so that he can create his magnum opus on the legal profession as a whole. He seems bashful about this, but once he realizes that this aspect of his personality further endears Jackie to him, he opens up more and more, and he begins to expound on his principles, and how at odds they are with the world both he and Jackie inhabit, illustrating his own character as exceptionally singular.

Things begin to shift once Jackie reveals that she, too, dabbles in writing. More than dabbles, actually. In a scene that’s right at home in some psychological thriller/horror film, Jackie unveils the nature of her talents, and it is here that the dynamics begin to shift and, in their own way, unveil as well.

There is value in letting this story naturally unfold, so I won’t unpack too much of the plot from this point on. Before Jackie shares her writing with Michael, the viewer has been privy to a certain class imbalance at play: Jackie’s blue-collar naivete, and flirty flightiness, clearly gravitating around Michael’s erudite Ivy League know-how, even if he’s odd-looking and socially awkward. But Jackie, having been alone for some time, seems willing to put up with much to stave off solitude’s oppression, and the muteness of other lives in other rooms. After she shares her writing, Jackie seems to gain definition, in comparison to the shifty paralegal, and the power dynamic changes, and it is how Michael reacts to this change that makes this film so fascinating.

The film is an absolute showcase for Tom Noonan and Karen Sillas’s performances, which are pitch-perfect, and perfectly chart the rise-and-fall of the power dynamic. Noonan’s understated quality does well in confusing one’s read of the character: he’s charming certainly, and smiles well, but why does he shift so? What’s he poking around her apartment for? And his eyes certainly can take on an almost lethal sheen. Is he simply nervous around a woman he’s looking to bed, or does he pose a threat to this defenseless victim?

Sillas is a tour-de-force, as she’s constantly moving, and her emotions plummet just as much as they bubble into a giggly froth. Her insecurities, and her loneliness, are believable, as is her weary resignation at film’s end – and the insight she delivers to Michael in the final scene hits home, because of this. Both Sillas and Noonan were the originators of the role for the stage play, and it shows: they know these characters from the inside-out.

As for the dialogue? It’s very naturalistic, so you won’t get many poeticisms or lyrical beauties in the repartee (think Tennessee Williams) but it’s serviceable, and as far as replicating these kinds of situations, it does that exceedingly well. The aforementioned halfway point certainly gets more cinematic, and loses some of the energy built up in its back-and-forth, but gains it back in sinister paranoia rendered in close-ups and shadowy POVs.

Much is made of this film being about not just power, but loneliness, and it’s true, as these characters are lonely as all hell, about as lonely as another emotionally stranded Manhattanite: Brandon, from Steve McQueen’s Shame. In that film, the protagonist feeds off of anonymous sex and pornography, as he is unable to forge intimate connections with others. What Happened Was…’s Jackie and Michael feed off of one other’s loneliness, and the image each has constructed for the other, in order to gain definition for themselves.

The title has an in-story explanation, but I also think that it acts as an objectifying focus upon the events of the film, as the two characters will likely come away from the evening with very different stories of what had just occurred. They might be able to create all sorts of justifications for why they are who they are, but there is an underlying reality that one cannot escape, nor turn away from, when it asserts itself. It is reality that envelops Jackie and Michael in the end, when the two are left bereft of a certain, mutual possibility.

It is a delicate game, full of subtleties and little tracking maneuvers (how many glasses of wine has she had?, how loose is my dress, and where exactly is he looking?) and one in which the stakes are never fully laid out to both parties, resulting in the sort of misunderstandings that make people wither into isolation’s quietude, while the attentive viewer is ever more intrigued.

If you enjoyed this review of Tom Noonan’s What Happened Was…, consider supporting us and get patron-only content on our Patreon page. This will help the growth of this site, the automachination YouTube channel, and the ArtiFact Podcast. Recent episodes include a comparison between Thomas Pynchon’s Gravity’s Rainbow and Kurt Vonnegut’s Slaughterhouse-Five, a survey of photography from Josef Sudek to Laura Makabresku, and a discussion of Hermann Hesse’s classic novel, Steppenwolf.