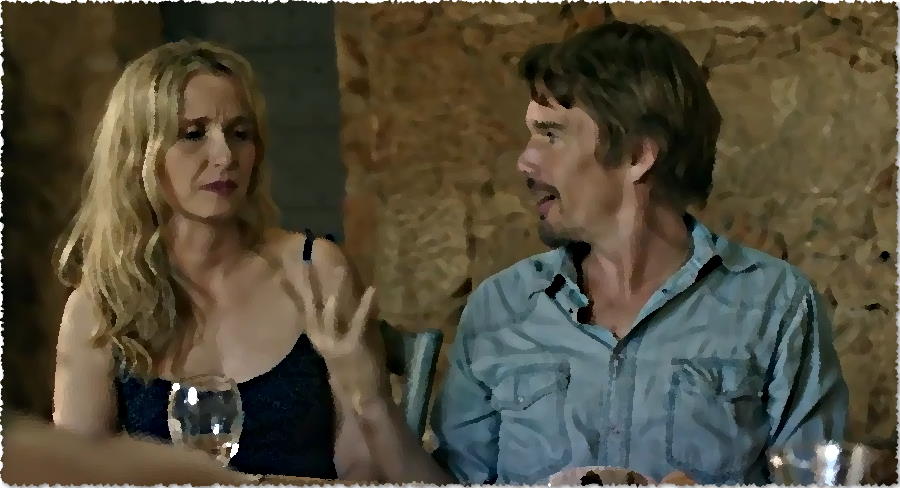 At the end of Before Sunset (2004), Jesse (Ethan Hawke) walks Celine (Julie Delpy) up to her apartment moments before he is set to catch a plane for America. As with the first film, Before Sunrise (1995), there is a pressing urgency to get to know and to say as much as possible within a short span of time. In fact, by the end of the second film, the characters have only now spent a total of two days together, yet their connection is undeniable. Before Midnight (2013), however, doesn’t carry this time-sensitive urgency as we come to learn that the couple is now married with twins.

Alright, this must be a happy ending (or beginning) then. Jesse is a published writer who also works as a professor. Celine is involved in activism and has recently been offered her ‘dream job’. They live in Paris. The couple, while vacationing in Greece, sees Jesse’s son Hank off at the airport, and this gets Jesse wondering if he has been present enough within his son’s life. Everything seems like a fairy tale. While in Greece, they visit a writer’s home and are offered copious amounts of food and drink. It is a seaside villa along the Mediterranean, and how many would be offered such an opportunity, much less how many writers live well off enough to afford such? It’s not that the couple is excessively extravagant, just that their situation, while real, is perhaps the most unrelatable.

Yes, we get that they are mindful of their kids and that Jesse’s ex-wife is not a nice person and an alcoholic (according to Celine), but we’re only seeing one side of the story. In Before Midnight, we learn that Jesse did miss his flight and that he and Celine engaged in sexual congress while he was still married. (If you were his ex-wife, how would you feel?) Both Jesse and Celine agree that they would like Hank to live with them, but for this to happen the couple would have to relocate to Chicago—a move that Celine doesn’t want, given her new Parisian job opportunity. As the night wears on, the couple argues and a resentment ensues, much that stems from Celine’s underlining resentment towards Jesse.

For one, he gets to go on two-hour philosophical walks wherein he thinks about his books. This seems fair enough when one is a writer, but Celine gets stuck with the day-to-day responsibility of caring for the children, as well as additional chores. She says she never gets much time to herself, and that she can’t stand the thought of being some ‘submissive’ woman.

Celine: You know what? The only time I get to think now is when I take a shit at the office. I’m starting to associate thoughts with the smell of shit.

Jesse: Ha ha. That is a good line. I gonna use that in a book someday.

Celine: I’m sure you will. And that’ll be the best line in the book.

Jesse laughs and tells her that she could never be ‘submissive,’ given her natural spunk and at times, anger. The Greek setting, while every bit as ‘magical’ as that of Vienna or Paris, is marred by a reality and an exhaustion between them. It’s not that their marriage is bad, but that it is real. In the first two films, their romance was spun out of urgency and attraction—there are no day-to-day burdens, no bill paying, and no responsibilities. Now all that is here, glaring at them. Some might claim that this makes their love deeper, while others might think it makes it duller.

The truth therein resides somewhere in between. Celine’s resentments are certainly warranted, as she feels that she’s given up much in her life in exchange for motherhood, while Jesse gathers all the achievement. Jesse, on the other hand, comes off more self-centered than in the first two films, often resorting to jokes whenever Celine asks him to say something serious. He has let his guard down, and likewise, so has she. Once again, we are presented with long shots of back-and-forth exchanges. The dialogue, written by Linklater, Delpy, and Hawke, is perhaps at its peak due to the real-life situation with which we are presented. Yet, how real to life is this for most?

As example, one can be a writer for several decades and never be invited to any Man of Letters’ Greek abode, much less be published on the NYT Bestseller list (in other languages no doubt), and nor be recognized while on travel (international, no less) and asked to sign readers’ books. This scene occurs when the couple is checking into their overnight hotel (which is already paid for), and Jesse gets asked by the hostess to sign her copies of his books. Following, she then asks Celine to sign them, and Celine, despite her reluctance at signing another’s books, does so. Perhaps in this moment she feels overshadowed by her writer husband—Celine, the mother, the appendage (or so she feels), who put her own artistic talents on hold.

Jesse: I love the way you sing. I fucked up my whole life because of the way you sing. Alright? And if you put one-eighth of the amount of time that you put into bitching into playing scales, you’d be like Django Reinhardt.

Humor aside, what is different about Before Midnight from the first two films is that this is no longer about longing, or dream. Rather, reality is center. And while realness certainly has its comforts, gone goes the mystery and wonder. This is not a criticism, however, as very often this is how life and relationships work. A fantasy is easy—it will do what you tell it, but reality is not so simple. Eventually, the couple’s argument escalates to the point of Celine leaving the room and informing Jesse that she doesn’t think that she loves him anymore. Wishing to be alone, she sits at a seaside table, and Jesse ultimately follows her. ‘If you want love, then this is it. This is real life. It’s not perfect but it’s real,’ he says.

Many claim that Before Midnight is the strongest of the three films, as it certainly carries the heaviest exchanges. There is a grit to the dialogue that is absent from the first two, and understandably so. But gone is the sense of wonder, as in, what will happen to them? The ending of Before Midnight gives a clue that the couple will continue onward, and that this fight is only part of their healthy, marital progression. Life will go on.

In my Before Sunrise review, I noted that one of the strengths was not knowing what would happen—would they reunite in six months? And moreover, one could even claim that the second film ruined that wonder—as the film’s power resides in each viewer’s mind. Would they reunite? Let the viewers decide.

Of course, this niggling aside, The Before Trilogy is a monumental achievement that one can relive and replay (both literally and internally). Upon rewatch, nuances are noted depending on where the viewer might be in life. Films don’t change, but our perceptions do. The evolution of both Jesse and Celine are a testament to this.

If you enjoyed this review of Richard Linklater’s “Before Midnight”, consider supporting us and get patron-only content on our Patreon page. This will help the growth of this site, the automachination YouTube channel, and the ArtiFact Podcast. Recent episodes include a discussion of Ryusuke Hamaguchi’s “Asako I & II” and “Drive My Car”, a catalogue of Elon Musk’s stupidest claims, and a breakdown of abortion, Roe v. Wade, and the Constitution.