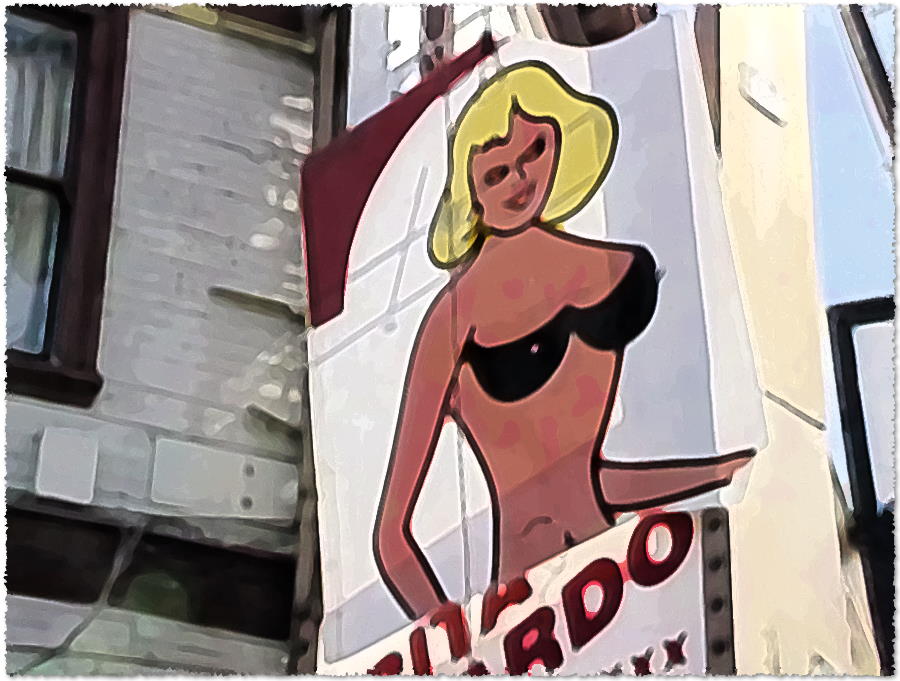 I clearly remember the first, and only, time I saw Carol Doda perform. It was the 60s and I was just strolling the boulevard in the North Beach section of San Francisco when I saw it: a neon outline of a blonde woman in a black bikini, complete with pink flashing lights for nipples. I had never heard of Carol Doda until then, but I saw the sign and the huge crowd waiting in an unruly, eager mob to get in—the bouncers at the club would let three people out and four people in, guaranteeing the place would stay packed. There were topless dancers in the country before Doda, but her act was breathtaking—from the size of her bounteous chest to her humor, singing, dancing, and wisecracking. It would be safe to say that she formally ushered in the topless craze (movement). As I left the Condor club, I was pretty sure this type of entertainment was maxed out, that no more could be done along these lines. To echo the sentiments of the cowboys in “Oklahoma!”: they’d gone about as far as they can go. How wrong I was.

Not too long after (I’m not talking geologic time here), I was invited to a new club in the San Fernando Valley by a co-worker. The ladies performing there were not only topless, but bottomless. The sign on the front of the place proclaimed that “If you are offended by nude entertainment, please do not enter.” I entered (purely for research purposes, of course) and found that adult live entertainment, public entertainment, had indeed advanced to another stage—far removed from the Condor and Carol Doda. Again, I foolishly decided that there was nothing further which could be shown.  Once a lady is wearing only stilettos and a smile on stage, that seemed pretty much the end of the Possible. But this was before the internet, adult channels in family motels, TV ads just short of soft-core porn, and the general sexualizing of society. Are we now, finally in the end stage of skin and sin? No. There is holographic sex in the pipeline and it will be so real, one will not miss a flesh-and-blood partner very much, if at all. There are androids which can be built to a customer’s specific requirements and perform sexually, also to his or her requirements. Yes, those will cost plenty, but as this advances—and it seems to be doing just that—imagine a whole section in Walmart for the buyer of more limited means. And sexuality is oozing out into corners not inspected by the vast majority, as evidenced graphically by Playboy’s October 2021 digital cover, which features a man (Bretman Rock) in full Bunny regalia. In fact, it seems that we are way, way, past Carol Doda and the Condor club, headed…somewhere.

On December 31, 2019, the World Health Organization (WHO) was informed of pneumonia cases of unknown origin in Wuhan City, China. In January of the following year, Chinese authorities identified the cause as a novel coronavirus. By March 2020, the WHO director—in light of the number of cases outside China—declared that the outbreak could be characterized as a pandemic. And all hell began to break loose. There were increasing deaths; there were media stories 24/7; there were oodles of charts and tables and colorful graphs explaining, warning, making dire predictions; and there were mandates.

Mandates are tricky; an official order giving someone the authority to carry out a policy or mission to do something. And my favorite iteration of this definition: the authority to carry out a policy or course of action, regarded as given to the electorate to a candidate or party that is victorious in an election. When the word “mandate” is uttered and printed by those in power, one knows for a surety that the power of government will be employed, for, after all, we have an emergency here and you DID give us the authority to do (in your name) what we think is best.  So mandates began and they now figure in almost every headline, news story, meme, waking moment of the public consciousness. But not to worry. When the virus goes away, the masks come off, and the mandates become history. That’s what I thought and hoped. Then more mandates were promulgated: No flying without masks. No grocery shopping without masks, no partying at the beach without distance…and masks. And those little mask requirements morphed into a larger, more muscular, more threatening demands for getting vaccinated. But we were all assured it would soon be over…except it wasn’t. Companies told their employees to be vaxxed or be let go: teachers, nurses, pilots, cops. There was talk of limiting Halloween excursions out into the  neighborhood. There was talk of “maybe no Christmas dinner with grandma this year.”  Even though hundreds of thousands of people had gathered at football and baseball games and car races and presidential birthday parties and governors’ dinners and vacation trips. It seemed surreal, but it was happening. People began to get edgy, angry, began to protest, began to take loud, verbal exception to school boards. There was a federal backlash to that, as if the parents were some kind of terrorists. At this point, one can hardly imagine there is a next step. Eventually, there has to be an end point, a point at which the culture moves on to the Next Shiny Object, but I see now—as I failed to do after Carol Doda—that it won’t move on any time soon—if it does.

What if it doesn’t? Wasn’t it Bob Dylan who sang that “the times, they are a-changin’”? And they were, but did the flower generation’s idea stay with us? Did they expand and become the norm? And are there ideas which die and become history’s footnotes, but others which become mainstream and normal? How does one tell which is which? And what, or who, finally decides which ideas stay around and which go the way of Theosophy, phrenology, and playing Beethoven for your unborn child? Can any democratic government create, promulgate, and enforce some new mandate without the public’s majority approval and acceptance without putting the National Guard on the streets? No armed force went out into San Francisco’s neighborhoods and bussed crowds to the Condor and forced people to watch the curvaceous Carol Doda do her thing, and no amount of force or laws or restrictions has snuffed out the fire Doda started. No magic ring worn by CEOs of Big Tech or Big Business seduced anyone against his or her will. It was an organic growth, bottom up, and not a mandate from DC or some governor’s mansion.

The growing public resistance to all the authorities’ declarations and threats should give pause to those in power. Top down is not bottom up, and any current person in authority is not Carol Doda.

If you enjoyed this piece on Carol Doda and vaccine mandates, check out the automachination YouTube channel and the ArtiFact Podcast. Recent episodes include an interview with singer Eva Schubert on writing good songs, an in-depth look at Elizabeth Barrett Browning’s “Sonnets from the Portuguese” with poet Joel Parrish, a philosophical look at kitsch, aesthetics, and NFTs with UK painter Ethan Pinch, and a long discussion on Edward P. Jones’s classic short story collection, “Lost in the City”.

More from Len Holman: A Nation in Need: Confucius & the Rectification of Names, UFOs & UAPS – The Sky Talks And It Is Us Talking, Ladies in Hats, Cleopatra: Queen of Charisma