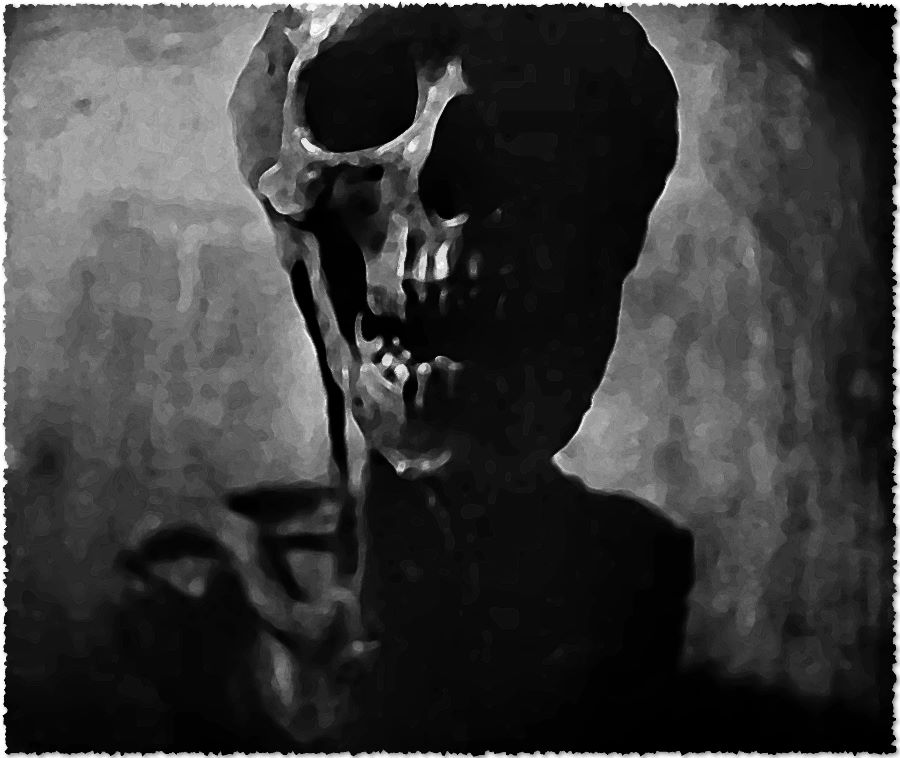 What to say when one cannot distinguish between one’s inner world and outer? When dream is not only as freighting as reality, but in its own essence, becomes reality? What to say then—especially when the fright involves a film that is mostly delivered via imagery over sound? Carl Th. Dreyer’s Vampyr was filmed utilizing three languages, which thereby made any speaking parts difficult. Thus, when Dreyer has his protagonist, Allan Gray, pull a thick ‘Book of Vampires’ out from his slim coat pocket—it then serves as the simplest means for narrative delivery.

Allan Gray arrives at an inn that is haunted by shadows. Whether this is dream or real is undetermined, as there are many moments when that line is blurred. The film, whilst not containing many spoken words, is shrouded in shadow. In it, the images construct the narrative. Gray dips in between sleep, whilst cocooned amid that nocturnal hour when it is difficult to distinguish real from dream. Perhaps this is what makes this strangle of branches—when one looks to trees—so haunting. A vampire is on the loose—but she is not the cliché one imagines, but rather, an old woman who labors about in a cane and moves slowly in the night. When a young woman named Leone is bit, she falls ill and contemplates suicide.

The plot behind Vampyr is rather simple, yet the narrative is something otherworldly, as the realm of Carl Th. Dreyer’s storytelling resides within his ghosts, his use of shadow, and his skull-like imagery. This is where plot and narrative differ. Hollywood favors plot. Art favors narrative. Skulls line the shelves as decor in this ancient house, and their eyes turn amid the proper nocturnal hour. It seems everything haunting occurs at night. In rewatching this seminal classic, one can see not only the influence upon many films such as Mizoguchi’s Ugetsu (1954) but also Herk Harvey’s Carnival of Souls (1962). Both films include an eerie otherworldly quality, where we don’t quite know dream from reality. Shots set in shadow and fog, as well as the elusive ethereal—all contribute to the wonderment of dream from real.

Within many instances, Allan Gray is dispensed from consciousness, such as when he has an onlooker enter his room at night, only to deliver a book. The locks shift before we witness any physical manifestation. And Gray moves about like a ghost himself—unsure of where he is. And who can blame him when shadows are continually departing from their source? In perhaps the most famous scene, Carl Th. Dreyer sets a pegged leg man upon a bench, only to then be reunited with his silhouette. We don’t know what this is, just as we don’t know what ultimately murders the doctor within the flourmill. Who shuts the door? And who turns on the machine, only to suffocate this evil man? Is the same entity responsible?

Within Vampyr, shadows flee among ancient trees. There is a myth that exists amid the haunted dream. Perhaps it appears out from the corner of our eyes, but it exists nonetheless. When Leone falls ill, we witness the bite upon her neck. She then contorts her face into expressions of evil—baring her teeth, her neck bulges. Gone is the melodrama of clichéd Hollywood, which Dreyer happened to be competing with at that time. We humans tell a lie and then we go on expecting everyone around us to believe it. This is the plight of the aged doctor, who many believe is a vampire himself. He sleeps in a coffin and moves about like a zombie. He leaves poison beside Leone’s bedside (or if we believe that was he, again—marred is the reality existing between life and dream).

Leone recovers. But far more interesting is the multiple manifestations of Allan Gray. For much of the film’s beginning, we only witness from his perspective, but as the film unfolds, we see scenes outside him. This shift in perspective is important, as it sets precedence within this reality, as in, is there even a reality? Vampyr as a film is so ethereal and haunting that words don’t serve it justice. (And this is only further exemplified via Dreyer’s minimal use of dialogue.) Perception versus objectivity is a recurring theme within this film. When we witness Allan Gray split from his shadow—just as the man with the peg leg, Gray becomes a separate entity. He then discovers himself within a coffin. He is dead. Or is he? Then, in an intricate moment of direction, Carl Th. Dreyer reveals the upside-down world—or rather, the term I used in a poem—‘this upside down hour.’ We then experience Gray’s perspective within the coffin. We witness upside down trees, this ever strangle of branches, these arching buildings.

Perhaps the most symbolic scene in Vampyr is that of the doctor within the flourmill. He enters and the door shuts. The wheels turn but we don’t know what is causing its force. What shuts the door? Is the cause for the door the same as the flour? Meantime, Gray is escaping towards sunlight, but first he must endure the shadow and fog. For a time, he becomes lost—clouds on water—whilst floating in the gondola. This is a scene that would later influence Mizoguchi in his classic, Ugetsu.

And this brings us back to the infamous scene of the flourmill. In a film filled with shadow, silhouette, and shade on dark graves, the beauty is ominous. Vampyr is one of the most strikingly beautiful films ever made on the macabre, and Carl Th. Dreyer, despite his years lived, knew how to evoke timelessness. To suffocate, via the falling of soft powder over and over to where one cannot breathe, to surrender one’s self involuntarily to the white, omnipresent stream—such a contrast is this to the love of nightmare, the gothic cathedrals, the evil skulls. Death can occur among many facets, including something simple as a flourmill. Yet, given the doctor and his evil, we do not sympathize with his plight.

So returning to my initial question—what to say when one cannot distinguish between one’s inner world and outer? When night blurs and we are offered only shadow as solace? Vampyr is perhaps too poetic a film for one to answer. And yet, imagine the cliché with a lesser director. But here—the vampire dies and the bad guy suffocates within a shroud of flour. There are some who will always presume to be more important, regardless of their place in the universe. The dead are not anymore powerful than the living, at least according to this film. Allan Gray momentarily witnesses the world through a coffin’s glass window and life continues. With or without him, it continues.

If we are fortunate enough to escape from sleep amid those early hours, perhaps we too can detach from our shadows, elude our dreams. But would we want to? Too often I reach for the early morning. These silent moments are a gift. I know this and I am inclined to believe they exist, if only I am able to remember. Beyond the window lurk the foreboding birds with dark wings. Vampyr is haunted by shadows.

If you enjoyed this review of Carl Th. Dreyer’s Vampyr, check out the automachination YouTube channel and the ArtiFact Podcast. Recent episodes include a breakdown of Elizabeth Barrett Browning’s Aurora Leigh, a dissection of Kurt Vonnegut’s classic novel, Galapagos, and a long discussion of photography from Alfred Stieglitz to Fan Ho and Vivian Maier.

More from Jessica Schneider: To Be The Oddity: On Terry Zwigoff’s “Ghost World” (2001), Low to the Ground: Elizabeth Barrett Browning’s “Aurora Leigh”, Art of Observational Narrative: Karel Zemen’s “Journey to the Beginning of Time” (1955)