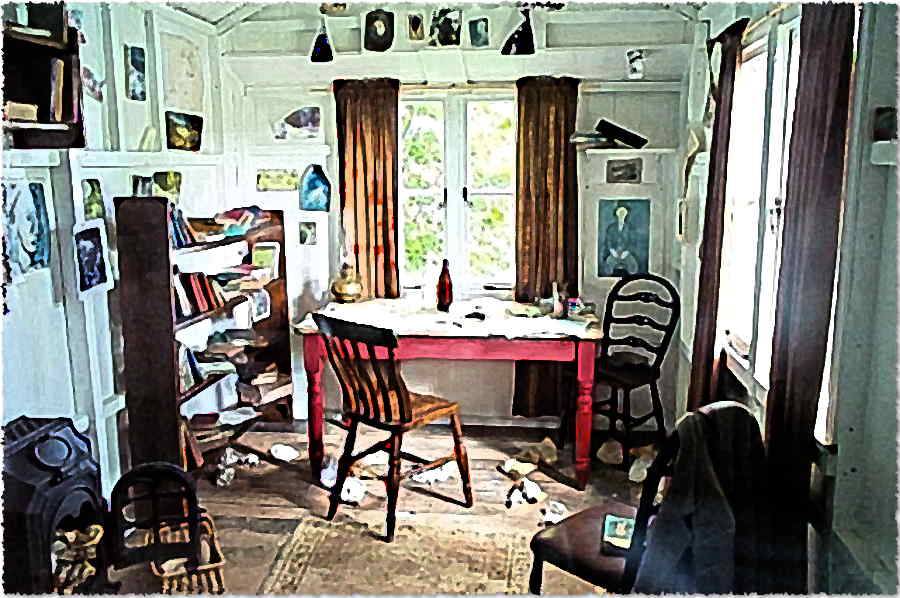 Do not go gentle into that good night,
Old age should burn and rave at close of day;
Rage, rage against the dying of the light.

It could just be the plea to a dying man, or else a plea to all generations of today’s world. We’re talking fire here. And a good fire. Old age could be synonymous with old patterns in politics which perpetuate tired wars. Admittedly, wars are not gentle to most ways of thinking, but they are predictable and go down trodden paths. I don’t believe Dylan Thomas is telling us to take up arms; it is a metamorphosis of the soul he’s talking about. Traditionally gun battles are not of the soul. The fight should be within. Battles of the soul are not always gentle. Even Jesus overturned the money tables in the temple.

No. Fights of the soul can contain violence, bitterness, and severe struggle. Thomas is not calling for a 12-step program; he’s calling for a revolution. Once again, I don’t believe he’s called for arms; he’s calling for a rally of the spirit. On a lighter side, you have The Beatles singing, “shake it a baby, twist and shout”. There’s something dynamic that happens when you let your life juices bubble up and come out into the light. It is not necessarily a calm controlled process.

But is it anarchy? Nothing in the poem mentions anarchy. Indeed, The Beatles in another song sang, “You say you want a revolution…but if you’re talking about violence and destruction, you can count me out.” People should be competent enough to rage in their souls without clubbing their neighbor over the head.

In this sense, I see “Do Not Go Gentle Into That Good Night” as a ’60s mode poem. We’re missing that in today’s world. People ARE clubbing their neighbors over the head, if not shooting them. That’s not the road. It IS a road to go, but it’s not THE road. It’s not the road spiritual people walk. The road being walked by so many today is yelling and not raging. You must have moral fiber to rage. Any fool can yell at someone. Not everyone has righteous rage.

So, why are we supposed to rage anyway? It is a reaction to the dying light. I don’t mean to get too far away from the fact that this is a poem about dying, but do you think Dylan Thomas also saw this on a broader scale for all people? I do.

And it doesn’t need to be just about war or politics.

Wild men who caught and sang the sun in flight,
And learn, too late, they grieved it on its way,

It’s about letting life slip through our fingers. Mick Jagger. “I can’t let you slide through my hands.” No, Jagger’s raging. We could all do the same. (Please excuse the rock-n-roll references, but I was raised on rock-n-roll.)

Good men, the last wave by, crying how bright
Their frail deeds might have danced in a green bay,

The poem is also about missed opportunities. You’re familiar with the adage that it’s better to be forgiven than to regret. Dylan Thomas is reminding us of this. He’s calling for risk-taking, seizing the day, grabbing opportunities. Get out of your box.

Of course this poem dances with madness. Won’t I go insane if I take this poem to heart? Thomas doesn’t say this, but I don’t think it’s antithetical to rage sensibly with some control. We’re not talking arm-flailing; we’re talking blood-boiling. Thomas doesn’t mention howling at the moon. You have to have a little taste in your rebellion, a little class.

So, Dylan Thomas has given us a villanelle. Arguably, “Do Not Go Gentle Into That Good Night” is not the greatest poem in style that’s been written. Much of the language is common and plain spoken. In its defense, it does hold to its rhyme scheme, and there is some consonance especially in the opening line. It also has rhythm and balance. But it’s not a great poem in that regard.

Its greatness comes from the weight of the imagery.

And you, my father, there on the sad height,
Curse, bless, me now with your fierce tears, I pray.

Can’t you really see the boy begging his father for some emotion? Has anyone else been there? I know I have. Dad, what happened to the father I knew growing up, full of energy and light? Now, you’re just a frail old man. Get up. Rage. We might say, the father knows better. He doesn’t wish to see his son go over the edge. Could the son handle it if he started to rage? How could one know?

How could one tell whether society would be better off in the long run, if people raged? I can relate my personal experience with raging against my girlfriend who stood up to me with her magic. In that situation magic won. If people raged at the dying light would society’s staid rules and traditions win? Would there be retribution by those in power? Well, my girlfriend never had retribution, and my current girlfriend likes fire. We found out what happened in the ’60s with righteous raging; most of us petered out or were stifled in one way or another or changed gears, got new interests. But some of us are still raging, if not raging more than ever at the dying light, this time because we’re more in fidelity to Dylan Thomas’s poem. We’re raging against our old age. I for one am waiting for the youth’s rage at a dying world. Many have gone about the problem in a systematic method. Maybe that’s more effective. But maybe there’s an undercurrent of suppressed rage. Maybe the youth does have its righteous anger. I don’t know. Let’s just hope they have not forgotten how to fight for the light.

If you enjoyed this review of Dylan Thomas’s “Do Not Go Gentle Into That Good Night”, consider supporting us and get patron-only content on our Patreon page. This will help the growth of this site, the automachination YouTube channel, and the ArtiFact Podcast. Recent episodes include a survey of photography from Josef Sudek to Laura Makabresku, an examination of Abstract Expressionism as depicted in Kurt Vonnegut’s Bluebeard, and a debunking of Internet sciolists such as Jordan B. Peterson and Christopher Langan.

More from Bruce Ario: Only Two Roads? On Robert Frost’s “The Road Not Taken”, Small Group Process: The George Fairweather Way, Jesus Is Born: The Christmas Story As Art