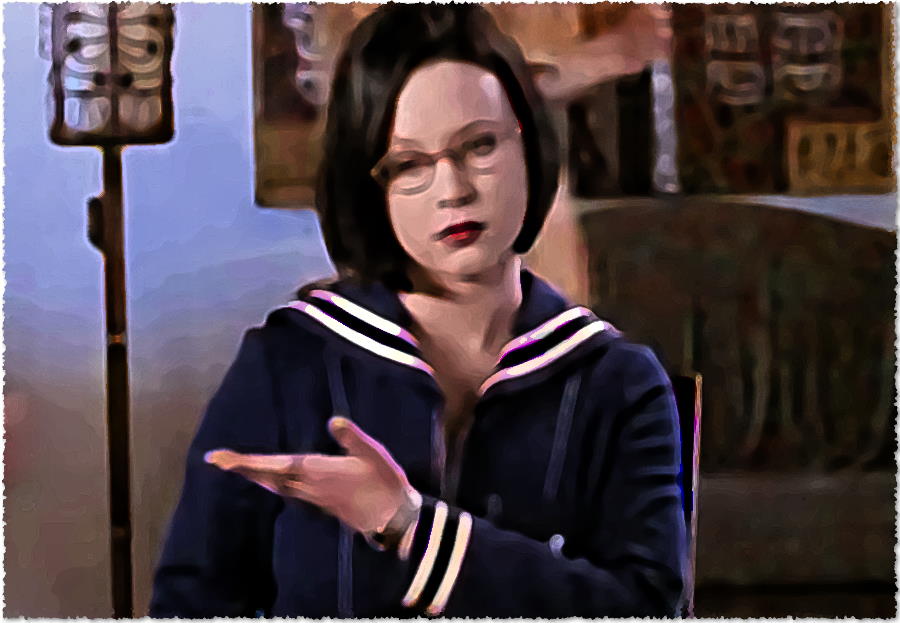 Have you ever felt the odd one out? Or perhaps you feel normal and it’s the world that’s gone bonkers? What if your closest friend no longer wishes to engage in your strangeness? After all, the world isn’t sympathetic and eventually the time comes to grow up. Terry Zwigoff’s Ghost World is a wonderful film that undertakes just this. After having directed Crumb, another film about an oddity, Zwigoff tackles Daniel Clowes’s graphic novel and renders it within film. Enid (Thora Birch) and Rebecca (Scarlett Johansson) have just graduated high school. They have been best friends for years and always embraced being ‘weirdos.’ ‘Those are our people,’ Enid says. They don’t plan to go to college, but rather, they will move in together once they both land jobs. Enid, however, is stuck taking a remedial art class over the summer. ‘It’s an art class for fuckups and retards,’ she speaks deliberately.

Enid is one of those characters that one will either really connect with or not. She has no life plans—not because she is some loser, but rather, nothing requiring such pursuit interests her. Who wants to be like everyone else? One day the girls respond to an ad they see in the paper. It is written by Seymour (Steve Buscemi) who is a lonely record collector. It is one of those ‘I saw you there’ ads, where Seymour seeks some blonde. ‘You were the blonde and I wore a green sweater. Did we have a moment?’ the ad inquires. Enid calls pretending to be the blonde, suggesting a place to meet. ‘Wear that green sweater,’ she suggests. The girls wait and watch him from afar. After he is stood up, they witness him shouting within his car to another driver. They follow him and come to learn that he holds a record sale every Saturday. Enid speaks with him and comes to like him. ‘He’s such a clueless dork that he is almost kind of cool,’ she says. Enid and Seymour are very much alike, as neither feels they relate to the human population. They both struggle with human connection, which is key to understanding some of Zwigoff’s artistic choices in Ghost World.

This new friendship causes a rift with Rebecca, who lands a job at a coffee shop and wants to find an apartment. ‘When are you going to get a job?’ she keeps asking Enid. ‘So many weirdos and losers come here,’ Rebecca says. ‘But those are our people,’ Enid reminds. Eventually, Enid does land a job but gets fired on the same day. ‘The manager was a total asshole,’ she says. Turns out she is not able to put on a phony face, even when selling movie tickets. Enid dyes her hair and wears thick, clunky boots while Rebecca is content in pastels and khakis. She is impressed by decorative, plastic cups for the apartment and an ironing board that folds out from the wall.

Meanwhile, Enid is taking an art class that is run by a PC professor who thinks that all art is about intent. The teacher, played by Illeana Douglas, does a clever mockery of those in defense of bad art, so long as it has the proper social or political intent. Zwigoff (and therefore Ghost World) takes a position here rather than just ‘letting the viewer decide’. Enid rolls her eyes throughout much of the class, and it is only when she shares a ‘found art piece’ of racist memorabilia that her teacher begins to hold her in high regard. Not because the work is of any quality, but because Enid gives all the right responses. It seems that Seymour is the only person with whom she can connect. She admires him for what he collects. ‘You think it is healthy for a grown man to collect so many things?’ He admits to turning to his hobby due to his inability to connect with people. Where Seymour feels shame, Enid feels admiration. ‘You’re like my hero,’ she says.

I first saw Ghost World one afternoon on television, with commercials, about a decade after its release. Each time the film returned following commercial, the announcer would say, ‘Ghost World: starring Scarlett Johansson.’ It was as though Thora Birch didn’t even exist, even though Terry Zwigoff ensures that she carries the film. So, whatever happened to her? Scarlett’s character is so much of a cipher that could have been played by anyone. Her part is not so important. Yet there would be no film were it not for Thora’s performance. The first time I watched, I didn’t quite realize how symbolic this film actually was. As example, there is a recurring character who waits for a bus that never arrives. His name is Norman and at one moment, Enid says, ‘I always know I can count on you. You’ll always be here.’

Eventually, Seymour gets a call from the blonde. Her name is Dana and she is rather bland and basic. She wears pastels and business type clothes and enjoys conventional films. Commonplace. Ordinary. She is in no way an eccentric. In fact, she much resembles what Rebecca has become. She gets on in the world without any trouble because she is able to conform to it. But what of those who can’t? When Enid gets drunk one night, she asks why Seymour never considered dating her. ‘Don’t you like me?’ she asks. ‘You’re a beautiful young girl,’ he replies. She suggests they move in together, which he seems to oblige. Yet when he inquires, she says, ‘I was just thinking out loud.’ Then, time passes and she doesn’t return his calls.

Enid doesn’t know what she wants. But she knows what she doesn’t want—to be like everyone else, when the world feels like something to which she does not belong. Later, her art teacher informs that she had to fail her due to her offensive art submission. Enid now has no prospects—any potential art scholarship has fallen through, Rebecca is moving on, her father has a new girlfriend that Enid does not like, and Seymour—well, he is there but the problem is that they are too much alike. Or as Roger Ebert describes: ‘Seymour and Enid are too similar to fall in love; they both specialize in complex personal lifestyles that send messages no one is receiving.’ It’s akin to meeting someone just like yourself, flaws and all. Many don’t handle well when a mirror is held up to them.

Zwigoff ends Ghost World on a subtle and poetic note. Remember, this is not just some dumb, random ‘teenager movie’. The bench where Norman has sat for so long now remains empty. He eventually caught his bus, after all. Enid now waits there—not long before a bus of her own arrives. It is void of people—likely just how she’d prefer it. The scene contains a ghostly quality. Where the bus is going, we don’t know. It’s not that Enid lacks direction, as the ending runs counter to this. She is going somewhere. Now, she is moving. In the film’s opening scenes, we are given glimpses of those living in apartment complexes, as though they have always been there and will always be. Nothing could ever seem to blast them from their eternal ennui. To move outward can oftentimes lead one to move inward. To be the oddity is not such a bad thing. But navigating the bus alone amid this world of ghosts—no one ever said oddness was easy.

If you enjoyed this review of Terry Zwigoff’s Ghost World, check out the automachination YouTube channel and the ArtiFact Podcast. Recent episodes include a breakdown of Elizabeth Barrett Browning’s Aurora Leigh, a dissection of Kurt Vonnegut’s classic novel, Galapagos, and a long discussion of photography from Alfred Stieglitz to Fan Ho and Vivian Maier.

More from Jessica Schneider: Low to the Ground: Elizabeth Barrett Browning’s “Aurora Leigh”, Art of Observational Narrative: Karel Zemen’s “Journey to the Beginning of Time” (1955), Lessons In Vanity: On “Eyes Without a Face” (1960) by Georges Franju