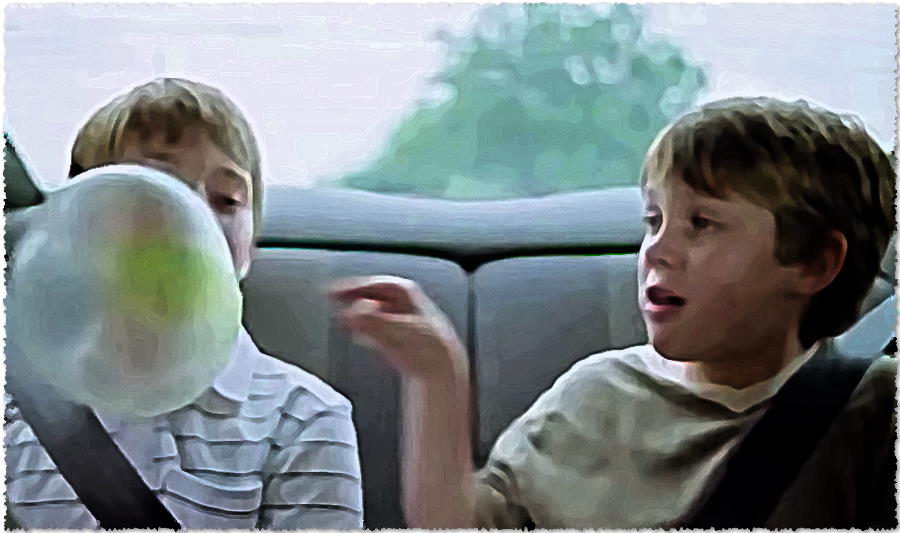 The opening of Richard Linklater’s Boyhood – a cloud-crowded sky and the stare of a boy – is one of vast possibility. Here is a yet-to-be shaped visage (with Coldplay crooning about stars and how they shine for you) captured in one of those indelible moments, no doubt, when time relaxes into some afterschool daze, and no other obligation exists save to lie down, dampened by grass, and to look around, thinking.

It is a moment most of us have felt, and probably longed for, if our childhoods were as frequently troubled as Mason’s (Ellar Coltrane), the young boy whose face will change over the course of the film, over the course of twelve years, but whose eyes will still somehow retain that same lingering sense of possibility.

This is a film about moments. About time, certainly, but really about how moments build up, over time, into people, relations, and everything else. Linklater’s decision to tell the story in a series of vignettes (partly a consequence of how the film was shot, I imagine) was a wise one, for it captures this process of moment-accrual in efficient bursts, letting the viewer make the appropriate connections in the intervening elisions.

In fact, some have argued that the title might be a misnomer, and that the film could have easily been called Motherhood (with its undeniable focus on Patricia Arquette’s embattled single mother Olivia) or perhaps simply Growing Up, as Mason’s big sister Samantha (Lorelei Linklater) is given a certain amount of attention in her own development. But that would deny the fact that Mason is the locus around which these lives circulate – adumbrate – as well as the fact that an essential part of boyhood (Mason’s, at least) is these other generalities, and to ignore them was never the film’s aim, despite the title.

Boyhood is a very patient and understated movie, letting its subtleties work on the viewer sans any obvious visual bravura, and its somewhat loose framework (no title cards spelling out MASON – AGE 15, here), again, gives viewers space to chart out Mason’s progression on their own. Because of this understated quality, it also contains gaps through which its harsher critics stick their foot and stumble – unaware that the film soundly counters their snide attacks, which seem to mostly be levied at Mason’s characterization.

And, for all its patience, there are moments of unexpected dynamism in its character-work. The first time I watched it, around 2014/15 or so, I was surprised by a suddenly unraveled despair loosed by Olivia, near the end, when Mason is just about to leave for college. She asks her son if he’s taking a framed photo, the first he ever shot, with him to his dorm, and when he coolly says he isn’t, clearly not as sentimental as his mother, she breaks down and eventually exclaims:

OLIVIA: You know what I’m realizing? My life is just gonna go – like that. This series of milestones: getting married, having kids, getting divorced, the time that we you thought you were dyslexic. When I taught you how to ride a bike. Getting divorced again. Getting my master’s degree, finally getting the job I wanted. Sending Samantha off to college. Sending you off to college. You know what’s next? Huh? It’s my fucking funeral!

MASON: Aren’t you jumping ahead by, like, forty years or something?

OLIVIA: I just…thought there would be more.

On that first viewing, I was shocked that this character, who’d shown so much resolve and scrappy confidence in herself and her two children throughout the film, would dissolve in such a way, especially since the film appeared to be easing into a serene denouement, with Mason finally setting out on his trek towards manhood. Perhaps I thought some bittersweet monologue about growing up and leaving childish things behind was the more appropriate content for Olivia’s final scene. That seemed to be the way most other films would’ve operated, anyway.

My mistake: Boyhood is not concerned with aping films about life, or following some twee, predictable narrative, but with life, period, and the realistic reactions people have to events both banal and momentous, or, through the effects of hindsight, both. It’s a good scene precisely because it seems so out of character for Olivia – “seems” being the operative word, here, for the moment is prepared for, and subtly, at that.

And it’s precisely why Boyhood is such a good film, for it actually rewards the returning viewer (e.g. me), who might be more impressed on the first go-around by the shot-over-twelve-years technique than by its gradual shaping of character. It is this gradual quality that most of the film’s aforementioned critics miss, duped by their own ignorance (and/or crude snideness, which is the prevailing notion you get from something like this, courtesy of YouTube’s resident Film Slobs) into presuming that the film ought to be doing “more” than what it wants to do.

Is it this very openness that irks some viewers? Like I said, a lot of the film’s detractors sneer at the protagonist as one who isn’t worth all the fuss of a two-hour affair. Sure, Mason isn’t exactly a charmer (at least the kind you normally picture when the word’s brought up) and his faults are laid bare for a more condescending viewer to poke and jeer at. Go scour the many Letterboxd reviews of the film and you’ll see plenty of one-to-two-line zingers to this effect.

However, one’s like or dislike of a character should have little bearing on the question of its quality – is Mason well-developed, and given depth, beyond the more superficial, potentially grating, qualities? Yes, and I’d argue that those who are pissed off by him aren’t really paying attention to the character, and are simply (very much like Pavlov’s dog) reacting to pretentious, one-off statements he spouts here and there without considering the larger context. The film doesn’t bend over backwards to make Mason, or any of the other main players, a “likable” character, nor does it provide pat justifications for why he is the way he is. It simply portrays his growth, with very little personal melodrama (I mean, the most anger he expresses comes not after a high school breakup, but a bad hairdo), and come on: you’ve met Masons before, they exist everywhere, at all times, and Boyhood captures this particular slice of masculinity to a T.

On a related point, on my first viewing, I remember being a little credulous of the female attention Mason garners throughout the film, since he isn’t exactly (again, by most standards) a looker, and simply dismissed it as Linklater not anticipating the actor’s looks as he grew, and just writing the character as if he were some low-key lady-killer. But on subsequent viewings, I saw the impact of Mason, Sr. (Ethan Hawke) on his son, and how his advice on getting girls – how just being interesting, and a good listener, to boot, goes a long way – allows Mason an edge most other teenaged boys don’t have, bristling and bustling as they are into macho pretensions. See the scene where Mason, some friends, and two older students hang out at an abandoned house, and how the awkward, straining dialogue full of expletives reflects such encounters well, even if some of the acting leaves much to be desired. But notice how Mason simply observes, and, as he plays along with the older guys’ bullshit, never one for confrontation, how “above” it all he seems, having already been privy to more aggressive bloviations in the form of his old stepfather, Professor Welbrock (Marco Perella).

So much of Boyhood is like this – small, rather ordinary moments, building into life: Mason looking back at the flirtations between his mother and the professor, and how such interactions will establish themselves as a pattern going forward; Mason’s fascination with the corpse of a tiny bird, early in the film, lending a grimness to the surrounding juvenilia, and dimension to the character’s gaze, which the camera is often preoccupied with; Mason’s burgeoning interest in photography, and the evergreen debate of talent vs. business precipitated by yet another man who claims to know what’s best for Mason better than Mason does, apparently.

Is this a great film? No, I wouldn’t say so, since, for all Linklater’s subtleties, he remains with both feet on the ground, never soaring into lyrical heights or incisively penetrating into these characters’ psyches – in fact, Boyhood sort of drops the ball with the well-acted but overdone trope of the alcoholic, abusive stepfather. I’ve seen criticisms of the performances of Coltrane and Linklater’s daughter, and while I don’t think they’re stellar actors, they’re still quite good in the roles, and aren’t being asked to do anything “big”, anyway, and so capture that understated, teenaged awkwardness well. Arquette and Hawke are very good, and totally believable in their own maturations, with Olivia reaching a level of social respectability she’d always wanted, but never quite shaking off that high-strung quality which leaves her devastated in her final scene, and Mason, Sr. finally growing up into a “boring” dad who finally settles down, sells his classic car, and plays at religion to get along with the in-laws.

No, not great, but it almost gets there: the final scene is of Mason and a coterie of new college buddies visiting Big Bend. Of course, there’s a cute girl, Nicole (Jessi Mechler), and the typical meet-cute proceedings, but the grand vista of the landscape whelms this interaction into something larger than mere flirtation. They talk about themselves, what they want, and who they might become, and Mason’s dormmate (a writerly stoner type, since this is a Linklater film) yawps about time’s entirety, and its seeming preparation for the present moment, every moment, all for those present in the moment. They’ve all taken drugs, of course, and as the others crow at the twilight, Mason and the young woman reach an epiphany:

NICOLE: You know how everyone’s always saying, “seize the moment?” I don’t know, I’m kind of thinking it’s the other way around, you know? Like, the moment seizes us.

They speak truer than they know. Such insight leaps beyond what their faltering speech can convey, and reaches deeper than what psychedelics can provide. It is like that, the moment’s fold into another, and life going and going and time’s presence and the now of it perpetually. Their dialogue crackles with the vim of potential, and who hasn’t been there, rendered shyly eloquent by another?

Boyhood opens with a child’s stare, and music in the sky – the scope of what’s possible. It ends with the earth, echoes, and the swerve of a gorge; stone, and faces, riven by epochs – the depth of change.

If you enjoyed this review of Richard Linklater’s Boyhood, check out the automachination YouTube channel and the ArtiFact Podcast. Recent episodes include a comparison between Thomas Pynchon’s Gravity’s Rainbow and Kurt Vonnegut’s Slaughterhouse-Five, a survey of photography from Josef Sudek to Laura Makabresku, and a discussion of Hermann Hesse’s classic novel, Steppenwolf.