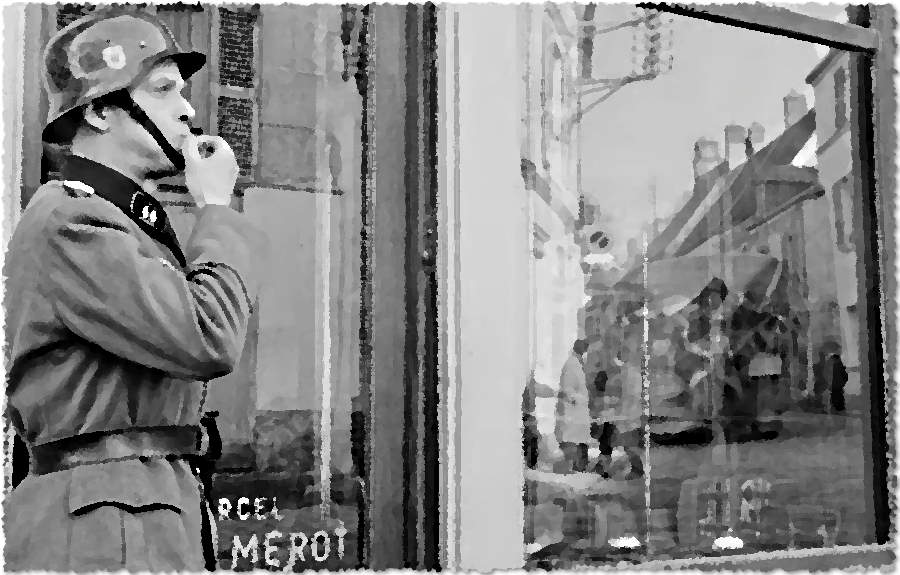 So what’s the deal with the priest?

Much has been said of the eponymous clergyman’s moral intrigue. His façade of almost cocksure piety, the intellectual judo he engages in his apologetics, and his verging-on-predatory manipulation of the young women in his parish. Jean-Pierre Melville doesn’t give much reason to doubt the “purity” of his intentions: he never sleeps with the women, but nonetheless seems aware of their admiration and does not discourage their private meetings with him. He is a handsome young man, and in a town seemingly bereft of such, is it any wonder many of the women flock to him? For some of them, sex isn’t even what’s desired: solely his presence, for a good deal of the husbands have run off to the forest to join the French Resistance to the Nazi occupation, and Léon Morin seems all-too-willing to simply utilize the possibility of sexual transgression (to sleep with a priest!) in order to create a captive audience. But an audience for what? And is there something deeper going on, something Morin himself would be loath to uncover?

For Barny (played by the incandescent Emmanuelle Riva), sex is what’s desired. It represents a culmination of sorts, for her. Bereft of God (she is a communist), widowed (her Jewish husband has died in the war), and sexually open (she crushes on one of her coworkers at the relocated wartime correspondence school, a beautiful secretary named Sabine), Barny does not seem so much repressed as she does availed of good options. This is an important point to make, as “repressed” is a loaded word, and it might be tempting to locate the source of Barny’s frustration in her, manifesting out of some unhealthy psychological baggage, as opposed to the machinations of the clergyman. There is nothing in Léon Morin, Priest to indicate that Barny, a bright, attractive and thoroughly secularized young woman, possesses any thorny complexes concerning her sexual desires – she even seems to dismissively analyze her feelings for Sabine as pure idealization, purging any kind of homoerotic transgression from their loaded exchange of gazes. Originally from Paris, and with her daughter in someone else’s care (in fear of the girl’s Jewish lineage making her a target for Nazi deportation), she lives alone, with mostly female company, and the men who work alongside her too old for serious consideration. The occupying soldiers (first Italians, then the Germans) are the enemy: in Jean-Pierre Melville’s world, to sleep with them would be a sin far greater than religious conversion, and is thus never an option. Sure, there’s stoppage, of a kind, but Barny seems – above all else – to be bored out of her mind, resulting in her intellectual prank on the clergy at St. Bernard’s.

“Religion is the opium of the masses.” So goes the verse every Marxist knows by heart, and, thinking that this priest’s peasant-like name of Léon would make him receptive to her little joke of an opening line at confession, Barny seems taken aback when the priest drolly plays along. Léon Morin half-concedes, expressing views contrary to the church’s, whose antiquated practices he is scornful of. Whatever explosive argument Barny expected (does she believe that her prank would result in converting a gullible country-bumpkin-of-the-cloth?), it is defused by Morin’s cold rationality, and instead, it is Barny who is left as the supplicant for a greater truth.

Apart from the acting, this is the best part of the film. And, if there is any driving theme (apart from the louder ones of flesh vs. spirit, control vs. liberation, and so on), it is that: expectations thwarted, again and again; the revelation of one’s desire as a false target.

An enemy occupation begins innocently enough, only to turn horrific soon after. A female coworker behaves like a bitch, only to become Barny’s close friend and confidante after a work spat. Sabine, once sexy and alluring, turns dour and seems to age rapidly after her brother is arrested by the Gestapo. And many other moments besides. (“But the talks with Morin are disconcerting. I charge like a bull, but the obstacle vanishes just as I reach it.”)

Yes, it’s inevitable that Barny will develop feelings for the priest. Yes, it is also inevitable that Léon Morin will stonewall her – and that her feelings simply augment despite his refusal. (In this, one’s expectations remain unthwarted.) Too much force has gathered to go down any other route, and now, Barny’s torment coalesces, even going so far as to forsake her atheism, for her repressed desire for Morin has sublimated into what seems like spiritual conversion. As for her repression…

By this point, at least, it has taken full effect, but only because Morin has wriggled his way into her psyche to such a degree that she likely associates her conflicted spiritual beliefs with her physical attraction to him. The only way to him would be through his Jesus. Thus, her Damascus moment. Granted, her “realization” that Léon Morin is handsome takes place after this conversion, but this possibly is just Barny giving herself license to pursue him, as an earnest Catholic worthy of his attention, and not as an atheistic political dissident. But once she gets to him, what then? She is no Puritan, when it comes to sex, but secular as she may be, Barny is not the kind of woman who’d draw a priest from his vow of celibacy. But even her daughter has been charmed by Morin, and there’s no mistaking the look in Barny’s eyes when she sees him fondly playing with her child. Most priests, I’d venture to say, would realize how foolish it is to involve oneself so personally in the life of a young widow and her child. Also, what does one make of his rough manhandling, moving Barny this way and that like a piece of furniture, as she’s all too pliant to his touch? Or the way he nonchalantly brushes the sleeve of his surplice on her body as he approaches the pulpit for a sermon?

I reiterate: what’s the deal with the priest?

There are telling revelations about Léon Morin’s childhood that may or may not inform his psychological makeup, but no more is given on that account, and no more is needed. What he is, for the purposes of Jean-Pierre Melville’s film, is a storehouse of implications, spiritual fervor masked by innuendo. Like any good priest, he exists as a receptacle through which his parishioners might find their faith. A charitable reading is that Léon Morin, aware of the local women’s sexual starvation, uses their attraction to him to lead them to the realization that self-denial is paramount, and that sexual consummation – Barny’s desire, ultimately, behind all the fretting about God, something she had come to grips with before meeting Morin – is not the highest consummation one can wish for. There are less charitable readings, to be sure. None seem as fortified, however, as that one…or as, I don’t know, dull.

That there is a surprisingly conservative core within the subtle eroticism might disappoint viewers. It is a good, interesting film, but Jean-Pierre Melville never allows it to cohere into a greater point, nor dig deeper past the subversions. One might also be disappointed by the negative ending for Barny, who distraughtly leaves Morin after he has been assigned to another village, after he has forced her to say aloud the “sin” of her lust for him, to his face, in confession. This leaves an aftertaste of moralism, an odd tragedy (not helped by the orchestra’s despair-laden accompaniment), since Barny ends up unfulfilled, virtually in mourning, as a consequence of her actions. A simplistic end for a character with so much potential! As for Léon Morin, he is interesting only so far as it’s implied – and not even an inspired performance of nigh-impish stolidity by Jean-Paul Belmondo can lift the character above that. The true brilliance is from Riva, who only two years prior to the release of this film starred in the Alain Resnais gem Hiroshima, Mon Amour. She possesses that uncanny ability of every great actor to become one’s mask, so to speak, and the sheer range of emotion she deploys with not a hint of unnecessary theatrics – it is perfect for the character, as well as for the low-key, almost old-fashioned, visual approach of Melville and Henri Decaë. Is anyone else still pissed off that the Oscars screwed the pooch on honoring this towering talent in 2013 by foregoing her for Jennifer Lawrence, of all people?

But mistakes are mistakes. And awards are, at the end of the day, simply appearances. They do not necessarily point to merit, but that’s a tired complaint, surely. One goes for appearances, first, of course; even the most earnest seekers fall for the glitz and glamour and, above all, the good looks. Why not, when they’re so damn appealing?

If you enjoyed this review of Jean-Pierre Melville’s Léon Morin, Priest, check out the automachination YouTube channel and the ArtiFact Podcast. Recent episodes include a breakdown of Elizabeth Barrett Browning’s Aurora Leigh, a dissection of Kurt Vonnegut’s classic novel, Galapagos, and a long discussion of photography from Alfred Stieglitz to Fan Ho and Vivian Maier.