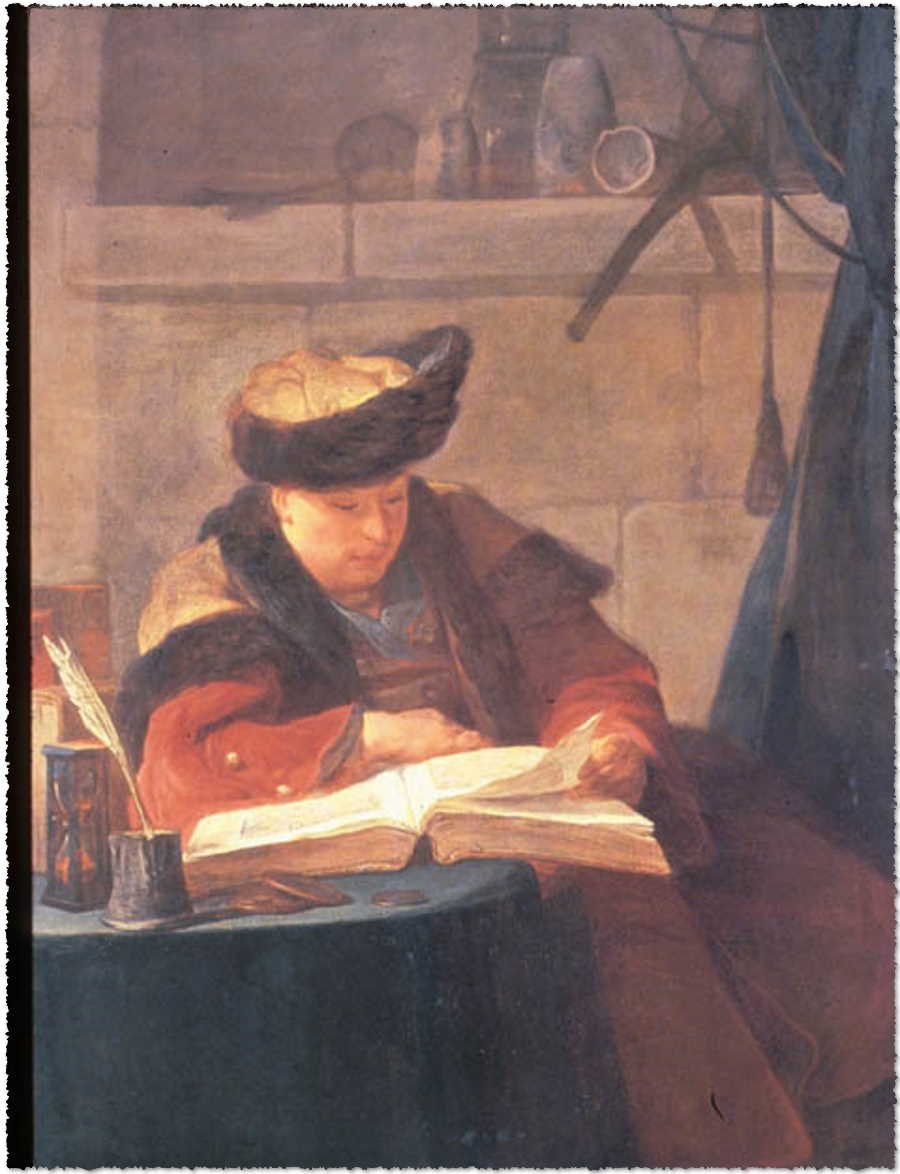 The above painting is by Chardin, and it is titled Le Philosophe lisant. I first came across it not in a gallery, but in an essay. It was written by George Steiner, and in it he attempts to unpack its meaning via the symbols Chardin assembles on the canvas and make larger commentary on the act of reading: its history, its presentation in the painting, and its state in contemporary society. It’s not a bad essay, and Steiner is clearly learned, but the main and immediate impression I got from it was how, after looking the painting up on the Internet, it may have been the inspiration for Wallace Stevens’s great poem “Large Red Man Reading”. Stevens seemed to have an abiding interest in French culture (sprinkling words and phrases of the language in his own poetry) and it would not surprise me if the poem was an ekphrastic one, based on Chardin’s famous painting. Anyway, that’s just a little curio, to start things off. Steiner focuses intensely on the silence of the painting (and silence’s importance in concentrated engagement with a text) but Wallace Stevens’s poem veers away from silence, philosophizing even further than Steiner’s rather staid scholarship:

There were ghosts that returned to earth to hear his phrases,
As he sat there reading, aloud, the great blue tabulae.
They were those from the wilderness of stars that had expected more.

There were those that returned to hear him read from the poem of life,
Of the pans above the stove, the pots on the table, the tulips among them.
They were those that would have wept to step barefoot into reality,

That would have wept and been happy, have shivered in the frost,
And cried out to feel it again, have run fingers over leaves
And against the most coiled thorn, have seized on what was ugly

And laughed, as he sat there reading, from out of the purple tabulae,
The outlines of being and its expressings, the syllables of its law:
Poesis, poesis, the literal characters, the vatic lines,

Which in those ears and in those thin, those spended hearts,
Took on color, took on shape and the size of things as they are
And spoke the feeling for them, which was what they had lacked.

The title already invites interest, and one shouldn’t have to hunt for paintings to find an “in” to what Stevens explores here. There is a reader, he is large (in what way? large, as in voluminous, or large-minded, maybe?) and he is reading. He is also “red” (a play on “read,” perhaps?), which might confuse the reader, as well as point to the Chardin painting, but one could see this as Wallace Stevens simply anticipating the way he plays with color in the poem.

The “ghosts” of the first stanza are, most of the time, interpreted as figures from some afterlife. This is not a bad assumption but leaves out readings that don’t buy into the religious context even though it is clearly trafficking in it. Suffice it to say that these figures are vague and unfulfilled, in some way, and are, for whatever reason, drawn to the man’s vocalized reading from “the great blue tabulae,” which is wisely unnamed, and specifically colored (more on that later).

He reads from “the poem of life.” Is this the tabulae, or a greater context in which the reader is subsumed in and/or portraying? In any case, this is characterized by ordinary, banal items that might be named in the tabulae, or are nearby him physically, or both: pots, pans, a stove, tulips. There’s a domesticity to the proceedings, on top of the rather private image of someone reading, albeit aloud. These figures, bereft as they are, “would have wept to step barefoot into reality” – they lacked/lack the ability to engage with it in any meaningful way, and long for some do-over for proper immersion. Again, these could be ghosts, as in spirits bound to some afterlife, but also, note: how many regular, corporeal folk live un-moored from their surroundings, not truly attending to and/or perceiving what’s around them? There is something about this man’s reading, his own engagement with the ordinary, that draws these figures back to reality. To actuality.

The tabulae shifts from “blue” to “purple.” Now, this could be another item, or the tabulae itself may have changed through the process of “Large Red Man Reading” – this is an especially appropriate interpretation as “red” and “blue” make…you guessed it. The reader imposes order, and here the poem has its moment: poesis (in Greek, “to make,” and the root for…you guessed it) seems to be the impetus which enlivens the reader’s speech and ensorcells the ghosts into emotion. It is the poetic mode that establishes a kind of law, literalizes and, sometimes, prophesizes; it is a vessel through which these shades actualize, forming themselves, bit by bit, out of spoken word, their lacks dispelled.

This is typical Wallace Stevens. An attachment to the real, i.e. “things as they are,” is a Stevensian mainstay, as is what he argues to be the supreme route to discovering the real: the imagination. On a technical level, this poem is not as enigmatic as other, more famous Stevens poems, and it’s quite brief, which can be helpful for a poet or reader of poetry that’s just starting out. The long(ish) lines give the poem an oratorical feel – appropriate, given the subject. The vocabulary isn’t very difficult – except, perhaps, for “tabulae,” an archaic term for a book/tablet, basically, or some compendium of data – and the only thing that might present some challenge to the reader is locating speaker/perspective. It’s an esoteric choice, to lay out the setting in the way that he does, but is effective, nonetheless. The phrasing is immaculate: “the wilderness of stars” (this could easily be trite in another poet’s work, but the context in this one refreshes it – plus, one can read the phrase as the stars themselves being the ones that expected more, which adds mystique); and, although much of “Large Red Man Reading” is somewhat plainspoken/direct, it is how Stevens dictates it that avoids the pitfalls of cliché.

This is one of the most emotional of Wallace Stevens’s poems, and should dispel the wrongheaded view of Stevens as the detached aesthete, the intellectual tinkerer of verse and vocabulary. Additional points to Stevens for the relative accessibility of its themes, too. There are countless poems out there that praise poetry’s power, and most of them are bad, resorting to the expected, over-used phrases/perspectives. Only Wallace Stevens could have written this, and uniquity is a tell-tale sign of greatness. “Those thin, those spended hearts” recalls Eliot’s Hollow Men, straw-souled personas who are present in reality yet never engage. Or Cavafy’s youthful apparitions, who are reminders of life to those voided of it. No, poetry isn’t a heal-all, and I disagree with the notion that if most people just read more poetry, they would live better lives, or be better people. There are those who are receptive and those who are not. But how many, poetry lovers or otherwise, pass through life only to reach the end and be baffled at their unfulfilled expectations? The world simply shifts about them in the peripheries, coalescing into form only when needed, or in some rare moment of profundity, before dissolving back into the detritus of their surrounds. For some of these souls, Stevens’s “poem of life” becomes their representative, embodying more than what they had before, voicing that which is so frequently unvoiced; a seeming sanctification beyond what their washed-out existences can allow them, subsumed as they are in that wilderness of discontented stars.

If you enjoyed this analysis of Wallace Stevens’s Large Red Man Reading, consider supporting us and get patron-only content on our Patreon page. This will help the growth of this site, the automachination YouTube channel, and the ArtiFact Podcast. Recent episodes include an examination of Abstract Expressionism as depicted in Kurt Vonnegut’s Bluebeard, a debunking of Internet sciolists such as Jordan B. Peterson and Christopher Langan, and a breakdown of Elizabeth Barrett Browning’s Aurora Leigh.