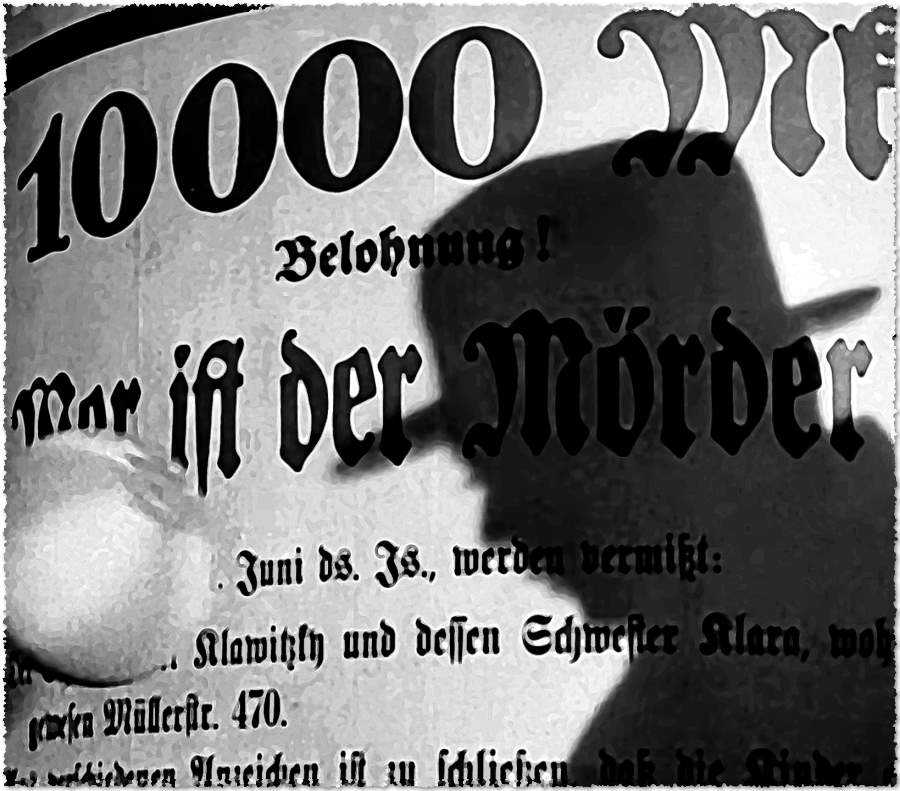 Fritz Lang’s M is a film so iconic in its visual narrative that it is difficult to imagine the scope of cinema without it. On one hand, M has been labeled a noir and on the other it is a crime story. Not horror, necessarily, despite being a film full of fear and terror. As Lang’s first speaking film, he uses both sound and silence effectively, where M begins as a dismal nightmare. The opening consists of children playing in a circle and singing a song about the neighborhood children who have been murdered. Everyone knows that a predator lurks about, so much so that even the children have invented songs. ‘He’ll turn you into mincemeat!’ they sing. Then, when one of the mothers overhears, she scolds them for singing it. The children are playful and occupied within their innocence, albeit there is an eerie quality to the scene, where something feels not right. One could even say it is rather creepy.

Neighbors know that children have been disappearing—a fear feeds the city, and the parents don’t want children walking alone. In another scene, the murderer—Hans Beckert (played by Peter Lorre), eyes a young girl through a mirror. Throughout Fritz Lang’s film is his use of shade and reflection, be it glass, mirrors, or shadows at night. The girl manages to elude him when her mother comes to greet her. ‘I wanted to meet you halfway,’ the girl informs her mother, unknown to either that in the corner lurks a predator. Lorre is both a good and odd choice for the lead. His face is rotund and at times tender—he appears childlike and lost, as though he is unsure where he needs to go. His days continue in shadow and his world is gray. There is a loneliness to this place set in 1931 Germany. People move about like ghosts—detached, as though walking in some netherworld. One gets a sense that they don’t realize how miserable they should be.

At the film’s start, Beckert presumably murders a child, albeit we never witness it. Rather, we watch her bounce her ball onto the sidewalk, whilst a man in shadow approaches. ‘What a pretty ball you have,’ he says. We see only the shape of his hat shaded across his wanted for murder poster. Beckert and the girl then walk together wherein he buys her a balloon toy from a blind vendor. All the while Beckert is whistling a tune, which will identify him later. Then, the scene switches and we witness the balloon now tangled in wire. It is a haunting image, and a sad one, when thinking of this young child turned victim. But Fritz Lang never saturates his narrative with sentiment. It is as though we too are looking through glass, where things appear differently depending on the angle. Following his silent film Metropolis, Lang uses dialogue sparingly throughout M, while also using silence in conjunction with the imagery. We get the sense that there is something evil lurking, waiting to make itself known once it moves out from the shade.

Here, we have a murderer who has been branded—both by the letter M that is chalked onto his coat and via the very tune he whistles compulsively. Ironically, it is the blind man who sold him the balloon who remembers the tune and thus identifies him. Beckert is then helpless, almost childlike as he is running from a mob that spots him. Citizens feel unsafe and they are paranoid. They turn against one another. The film then poses an interesting question once Beckert is caught by the mob and accused at an underground trial. Although he has few words throughout the film, Beckert’s declamation at the end is most arresting, as he painfully claims that he cannot help himself—that there is a voice within him that torments and orders him to murder.

Many have wondered if Beckert should be held responsible for acts he claims he cannot control. The short answer? Of course, he should. Whilst he has proven himself a menace to society, he is also painting himself the victim via this pity-play, whether he realizes it or not. Which returns us to his whistle—why does he feel the need to do this so compulsively? It is as though he behaves on command, or as if he is on autopilot—with each of his murders beginning with this same whistle.

The name of the song Beckert is whistling is Edvard Grieg’s ‘In the Hall of the Mountain King.’ I was curious why Fritz Lang chose this as his song, until I read the lyrics:

Supposedly, Lorre was unable to whistle and so it is actually Fritz Lang we are hearing. So, what is it about a whistle? It is an external act that can be interpreted multiple ways—whistle at the wrong person and that could land someone in trouble. Or perhaps it is a gesture one does to relax. Or a subconscious design. We don’t ever think about why we do it, we just do. In M, Beckert’s whistle emerges impulsively—he cannot stop himself.

Literature has utilized the idea of branding—from Hawthorne’s Scarlet Letter to Lady MacBeth in Shakespeare—their guilt is omnipresent because it is also marked. We believe it because they do. In M, it is not just about the letter scribbled in chalk upon his coat, but also his whistle. ‘I always feel it behind me. It’s myself. And I follow me,’ Beckert cries—the M still chalked upon him. Of course, he is referring to the evil that is himself. When he first eyes the M in the mirror, his face grows with terror. He appears helpless, exposed. This city has come alive in its defense, and it is perilous. At the film’s end, we come to learn that it is not the crowd’s accusation or their punishment he fears but rather the terror that is himself.

More from Jessica Schneider: Vincente Minnelli Does Vincent: The Many Faces of Van Gogh (1956), Choose Your Quarrel: Why Creativity Can’t Be Taught, The Sloven Dream Set in John Huston’s “Fat City” (1972)