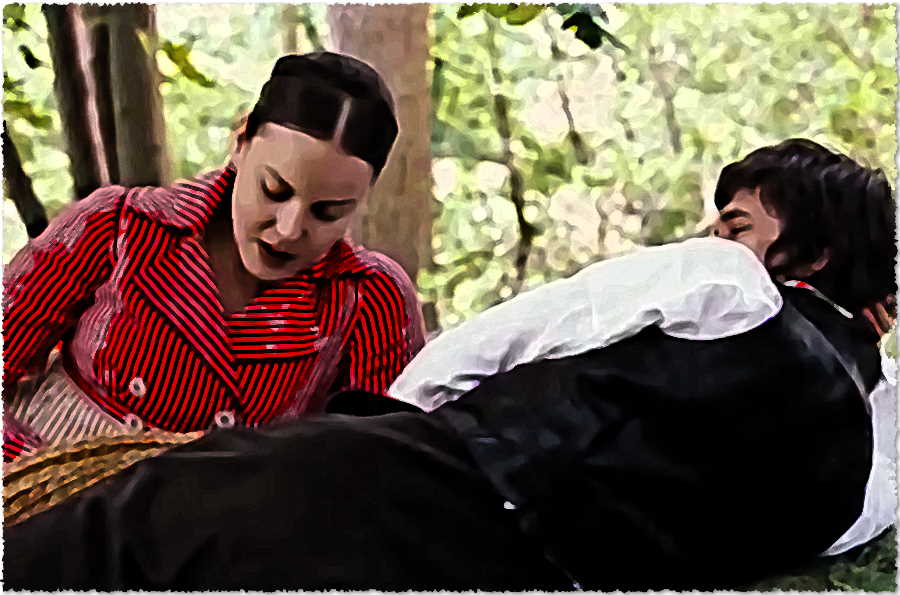 Jane Campion’s Bright Star is not so much a film about romance as it is about longing. Roger Ebert describes the young couple as ‘Forever in Courtship’—that is, if only their lives together could be as strong as the love they both long for. The film’s title is taken from one of Keats’s poems, which he wrote for his love interest, Fanny Brawne (Abbie Cornish). Keats (Ben Whishaw) is the artsy intellect who mutters artistic insights on a whim, whilst still conveying vulnerability therein. Whishaw is well cast, as he is thin, impoverished and handsome. He wears a dark, velvet coat and carries a top hat. He has a brooding introspection about him, and we can see this whilst he sits in the garden to write, often staring off into space for periods of time. What is he thinking about? Might his thoughts betray him?

Keats is living next door to Fanny Brawne, who is his landlady’s daughter. She is an intelligent young woman with a talent for sewing but has little interest in poetry, that is, until she meets Keats. They chat at a dance, wherein she longs to dance with him but Keats informs her that he doesn’t dance. She hears that he is poet, and with intrigue, she sends her young sister to the bookshop to retrieve his book. ‘Fanny wants to know if he is an idiot,’ her sister says.

Jane Campion’s work isn’t a typical romantic film where we watch two young people fall in love, even though that is what happens. They actually never spend much time together, as much of the intensity exists when they are apart. We witness Fanny’s romantic longing and how her highs and lows grow dependent on how long a letter Keats sends her whilst he is away. At one moment, she receives a letter shorter than usual and so she spends days in bed, wanting to die. But then, another letter arrives and all is redeemed.

If this sounds predictable, I wish to stress how accurate Bright Star portrays young love and how much of this addiction occurs on the inside. It’s not that Fanny and Keats don’t talk—they do, and a lot. She shows an interest in his poetry and she comes to love it. A genuine affection grows between them. But the problem resides with the fact that Keats has no means of making a living. It has been said that he showed a propensity for medicine and that he was encouraged to pursue that over poetry. In the film, he publishes two books but they yield no money. And it’s not that Fanny’s mother disapproves of him—quite the contrary—Fanny’s family comes to love him and even welcome him. At one point, she informs John that he and Fanny can marry and live in the house.

Throughout this Victorian time, tuberculosis was rampant. Keats’s brother Thomas has already succumbed to it, and he does so early in Bright Star. Then, following a series of bad habits, John Keats falls ill himself. Sent to Italy with the belief that the warm climate could cure him, it is there where he succumbs to his illness. Fanny then hears word of his death via Keats’s poet friend Mr. Brown (Paul Schneider), wherein she excuses herself and falls to the floor, unable to breathe. The scene is well acted, as Fanny then goes into mourning. Cutting her hair and wearing black, she walks within the snow whilst quoting Keats’s poems.

Poor John. He loves Fanny but never actually proposes to her, albeit he does give her his mother’s ring. He feels himself a failure for his inability to monetize his talent, but the film isn’t really about that. Rather, he longs for the world around him, which he cannot have. He cannot have love, he cannot have life, and so he dies, believing himself a failure. Such is the curse of the Romantic poet. But I must commend Jane Campion’s intelligent screenplay and direction, as we never dip into melodrama. As the film’s events are told from Fanny’s perspective, this could have easily occurred. Keats’s poems are utilized excellently, where we are given a glimpse into his verse. Even the letters that John and Fanny write to one another are well-written and in line with their character. The final couplet from Keats’s sonnet Bright Star seems to eloquently foreshadow their fate:

To feel for ever its soft fall and swell,
Awake for ever in a sweet unrest,
Still, still to hear her tender-taken breath,
And so live ever—or else swoon to death.

And this is exactly what happens—Keats dies apart from her, still swooning over that very longing they both crave. And Jane Campion reveals her intricate skill vis-à-vis her direction when she manages to take a rather stale theme and freshen it. How often do we hear of tales of long-lost love, longing and early death? Such tropes have populated much of the Romantics’ verse, but the craft is where competence resides. O, to live and to die for the sake of love, for the sake of art. We have read it a million times. Thus, Campion had her work set out for her, as how does one even begin to approach this and yet not fall into cliché?

The answer, of course, resides in character. Both Fanny and John are well-wrought individuals, as are Fanny’s family members. Fanny’s mother is not some strict, Victorian stereotype, but rather someone quite warm and loving. There are several moments where Mozart is utilized throughout the film. He too fell for his landlady’s daughter. If this is coincidence, I can’t be sure, but it works. Granted, without the poetry there would be nothing unique about John, aside his artsy flakiness and basking dreams.

At one moment, Mr. Brown explains that when you see poets staring off into space that they are in fact working. Where others might dismiss this as some form of escapism, poets get a pass. (And watching them feels like an intrusion.) Perhaps this is another reason why many feel so out of place to begin with. Those with the ‘simple thoughts’ never quite understand. But at least in Keats’s world, they respect poetry, despite the lack of money. Today, one never gets this. Craft is tossed aside in favor of celebrity.

Jane Campion is a highly skilled director. Her other films (Sweetie, An Angel at My Table, The Piano) exemplify this. I remember someone in college informing me that The Piano was the most boring film he’d ever seen. Given he’d never read a book in his life, when I finally watched the film years later, I knew he’d not been right. Campion’s films are intelligent and they require a sensitive mind. When the ending credits roll in Bright Star, Whishaw voices Keats’ words and it is here where the poet still thrives. Long live longing for the sensitive mind.

If you enjoyed this review of Jane Campion’s Bright Star, check out the automachination YouTube channel and the ArtiFact Podcast. Recent episodes include a debunking of Internet sciolists such as Jordan B. Peterson and Christopher Langan, a breakdown of Elizabeth Barrett Browning’s Aurora Leigh, and a long discussion of photography from Alfred Stieglitz to Fan Ho and Vivian Maier.