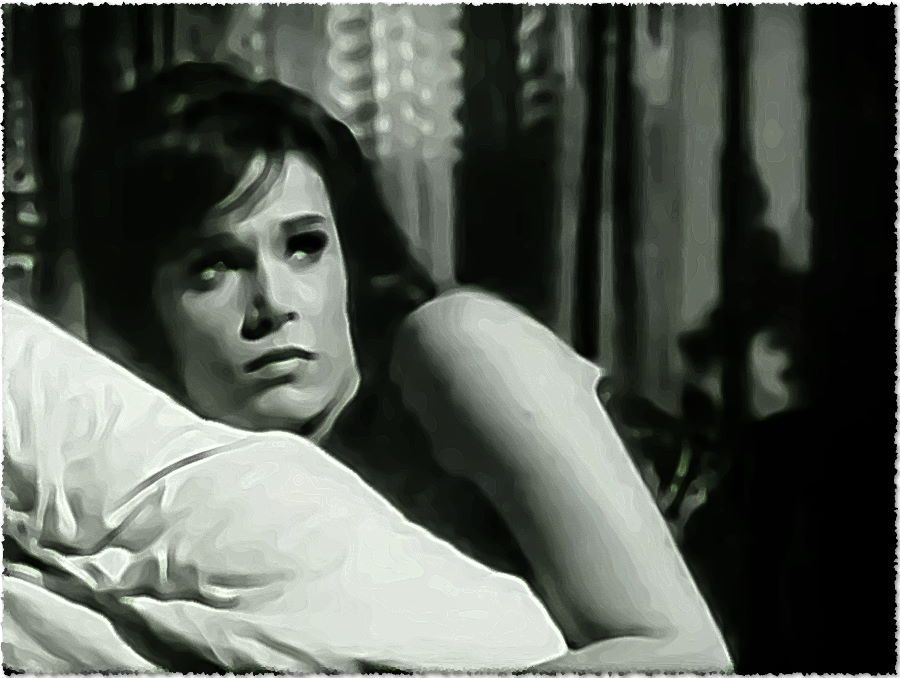 What is the going rate for each year of your life missed? Or in the case of Max Cady (played by Robert Mitchum), eight years in prison? Of course, Max Cady is a psychopath, so he believes he was wrongfully convicted and now he must now punish his offending lawyer. Nothing is ever his fault. Gregory Peck plays Sam Bowden, a successful attorney who seems to have the Norman Rockwell life. Large house, attractive wife and daughter—not to mention a prospering career—what more does a man need within this so-called American Dream? Well, perhaps a psychopath to taunt him.

It is always interesting to experience a remake before the original. Scorsese remade Cape Fear in 1991 and while not a bad film, it is most definitely not one of his best. From what I recall, the direction is rather lackluster and has more of a ‘made for television’ feel. Gone is the implication and subtlety. And despite De Niro’s skill as an actor, Mitchum is far more clever and convincing in his role of vindictive evil. Yet, poisoning a dog and harassing a family is only evil from our perspective because according to Cady, Sam Bowden deserves what he gets.

Cape Fear begins with a wonderful noir feel, and much of it is accomplished via Bernard Hermann’s score (who also created the score for Taxi Driver). We witness Cady walking into a courthouse, but not before ogling several women’s asses. While on a stairwell, an older woman with a stack of books drops one and Cady doesn’t bother to help her. Already we see he is an asshole. And now, after having served his time, he is a free man. Or is he? Legally this is the case, but damn if he is going to allow that arrogant lawyer, Sam Bowden, to get away with it.

The film poses many ethical scenarios, such as, that one cannot a punish a man for something he might do. Were that the case, we all would be in jail. So where is Cady? While Bowden frequents his regular places, he notices that Cady is not too far behind. Bowden finds him at the bar, just confidently drinking a beer, and later he sees him at the bowling alley. Legally, Cady is not doing anything wrong. So, what is the problem? One night, Cady eyes a woman at a bar with whom he goes home. Being the violent abuser he is, he beats her up. But she is too fearful and humiliated to report him, lest her entire family will know. He chooses his victims wisely, as though he knows their next move.

One of the first clues that something is amiss is when the family’s dog is poisoned. Someone just happened to drive by and toss out meat laced with strychnine. Bowden believes that Cady is responsible, but he cannot prove it. Then, when Bowden’s daughter Nancy is left in the car alone, Cady walks towards her. Out of panic, she runs into the school. She hides and screams, and we witness the tapping of feet and the lower half of a man’s body. The man happens to be a janitor, but she doesn’t know this. So, she runs out of the building and into the street and—lo and behold—into Cady’s arms. Once again, as Cape Fear suggests, Cady did nothing wrong. How can one punish a man who is simply standing on the street?

One might think that this should be enough. What does Cady want? In a moment of desperation, Bowden offers him 20 grand if he will just leave the state. Cady then asks what eight years should cost. How many hours paid at minimum wage? Bowden holds his offer yet why doesn’t Cady just take the money? Why the incessant need to harass his family? Cady admits that he does not have a family of his own and so he seems to revel in envy vis-a-vis Bowden and his picture-perfect life. In many ways, this much resembles Kurosawa’s masterpiece High and Low, which was made the same year. In that film, a low criminal attempts to blackmail a wealthy businessman (played by Toshiro Mifune) by kidnapping the man’s child. Yet, to his mistake, he kidnaps the wrong child. The businessman is then put into the ethical dilemma of handing over a large sum of money in return for a child that is not his own but is actually his driver’s son.

Make no mistake, J. Lee Thompson’s Cape Fear, while a good film, is nowhere in a league with Kurosawa’s opus. But they do share a somewhat similar theme—the idea of the low criminal who seeks to punish the man who is the success. Mitchum is no stranger to playing evil. Well known for his role within Night of the Hunter, not long after marrying Shelly Winters does she end up dead at the bottom of a river. (Interesting that she shared a similar fate within Lolita.) Mitchum has a wonderful screen presence that evokes both an assertive boyishness as well as classic handsomeness. The Criterion Channel has featured 30 of his films and he is, if nothing else, cool and consistent.

The third act within Cape Fear moves rather predictably, albeit enjoyably. The family escapes to the cape, which happens to be conveniently named Cape Fear. And Cady, once again with his clever luck, manages to locate them. He tries to seduce Bowden’s wife and then claims he wants Bowden’s daughter and of course none of this is going to happen without a fight. Perhaps one of the more impressive characters is that of the private detective, played by Telly Savalas when he still had hair. (It is worth watching the film if for nothing else but to witness this.) But it really is Mitchum who carries the film.

Cape Fear isn’t a deep film—it is more or less a well-made thriller. But it is more intelligent than its remake, not to mention better written than similar genre films today. Much has to do with the well-crafted mood. The black and white adds to the eeriness via its use of shadow coupled with the score’s intensity. Anyone who recalls Taxi Driver can remember the opening scene with that seemingly scary score—the one that Roger Ebert described as ‘a cab emerging from stygian clouds of steam.’ One can see how Scorsese was attracted to this film. Perhaps it was Mitchum’s performance or Hermann’s score, but why else would he choose to remake it if not to improve upon what was already there? Why he didn’t is the topic for another essay.

Two Mitchum films I recommend are Jacques Tourneur’s Out of the Past (1947) and Peter Yates’s The Friends of Eddie Coyle (1973). The former for its good-guy noir and the latter for its troubled criminal. Both can be classified as thrillers albeit the films are only 26 years apart. Yet look how much cinema evolved in that time. Then, look at the films today. A noir might be limited by its genre, but it can still thrive within that genre. Cape Fear does. And as for Max Cady? Sometimes obsession does not need a reason. But it is commonly felt within the envious, the rivalrous. With him, it is not just the envy of one man’s family but of one man’s success. And what of those, like Max Cady, whom no one envies? What of him? Who is he if unremarkable? One of the many nobodies, then?

If you enjoyed this review of J. Lee Thompson’s Cape Fear, check out the automachination YouTube channel and the ArtiFact Podcast. Recent episodes include a breakdown of Elizabeth Barrett Browning’s Aurora Leigh, a dissection of Kurt Vonnegut’s classic novel, Galapagos, and a long discussion of photography from Alfred Stieglitz to Fan Ho and Vivian Maier.

More from Jessica Schneider: Upside Down Hour: The Haunting of Carl Th. Dreyer’s “Vampyr” (1932), To Be The Oddity: On Terry Zwigoff’s “Ghost World” (2001), Low to the Ground: Elizabeth Barrett Browning’s “Aurora Leigh”