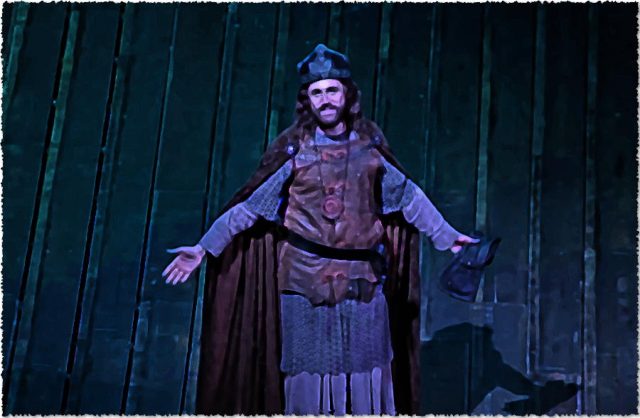 “Good friend, for Jesus’s sake forebeare/ To digg the dust enclosed heare/ Bleste be the man that spares these stones/ And curst be he that moves my bones.” The writing on Shakespeare’s grave makes us wonder, was the mysterious bard superstitious? In his play, Macbeth, he gives us the three wicked sisters who prophesize the life of Macbeth. Magic shows up in other works by Shakespeare most notably in The Tempest, with a ghost and a skull in Hamlet. Shakespeare wasn’t Merwin, but he did dabble.

And we know Shakespeare was ambitious like his character in Macbeth. It’s one thing to be superstitious and another to be ambitious, but when we mix them all bets are off and the sky is the limit. Shakespeare definitely shot for the moon. No one talks with the words Shakespeare put in the mouths of his characters, at least not all the words in one sentence, line after line. The playwright was well beyond everyday reality as most of us know it.

He presented a different brand of reality. He presented the reality most of us have in our guts, and magic was this cloud that gave the audience space and made his work palatable. Nobody could handle a Shakespeare play directly. Except that his characters do.

We have the aspiring king in the person of Macbeth prodded on by a scheming wannabe queen in a direct path to the top. But he just can’t seem to do it without the help of the witches. His road is tainted and unsurprisingly leads to destruction. […]