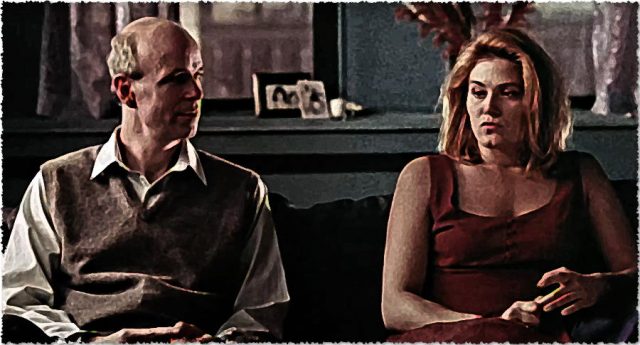 This is a small, understated film about power. One particular power dynamic, and the exchange(s) therein, but specific enough to be drawn out across many relationships and individuals who attempt to justify their own existences to themselves and to others, and end up misleading, and being misled, by said justifications.

What Happened Was… stars Tom Noonan and Karen Sillas, and was written/directed by Noonan based on his Off Broadway play of the same title. Having been only marginally aware of Noonan from his appearances on TV shows like The Blacklist and 12 Monkeys, I knew he cut a striking figure (who can forget such an imposing, nigh-skeletal frame?) and wasn’t a bad actor, but came away from this film doubly impressed by his acting skills and newly appreciative of his talent as a writer. And as a director – an all-around artist, really.

Of course, Noonan’s been around a long time, and has starred in some big-name flicks (Manhunter, Robocop 2, Synecdoche, New York among them), with a credible background in the theater, as well. In What Happened Was…, though, Noonan really asserts himself as a legitimate auteur – and in his debut, no less! The film won a few prestigious awards in the wake of its premiere, including the Grand Jury Prize at Sundance, but since then has sunk into relative obscurity. I’m thankful to the Criterion Channel for streaming it, as I’d never even heard of the movie before I discovered it by chance on the site. […]