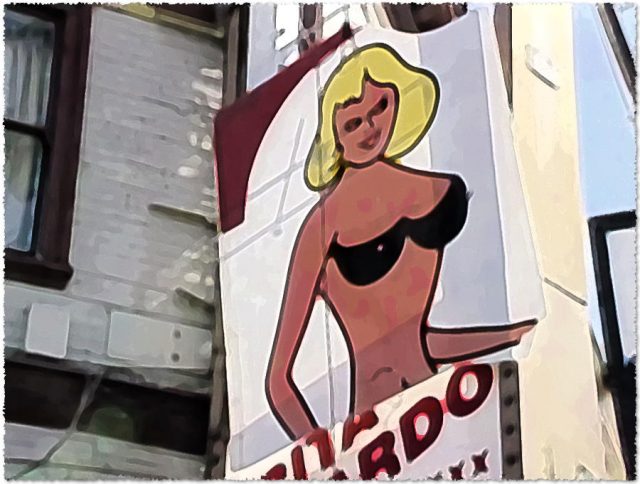 I clearly remember the first, and only, time I saw Carol Doda perform. It was the 60s and I was just strolling the boulevard in the North Beach section of San Francisco when I saw it: a neon outline of a blonde woman in a black bikini, complete with pink flashing lights for nipples. I had never heard of Carol Doda until then, but I saw the sign and the huge crowd waiting in an unruly, eager mob to get in—the bouncers at the club would let three people out and four people in, guaranteeing the place would stay packed. There were topless dancers in the country before Doda, but her act was breathtaking—from the size of her bounteous chest to her humor, singing, dancing, and wisecracking. It would be safe to say that she formally ushered in the topless craze (movement). As I left the Condor club, I was pretty sure this type of entertainment was maxed out, that no more could be done along these lines. To echo the sentiments of the cowboys in “Oklahoma!”: they’d gone about as far as they can go. How wrong I was.

Not too long after (I’m not talking geologic time here), I was invited to a new club in the San Fernando Valley by a co-worker. The ladies performing there were not only topless, but bottomless. The sign on the front of the place proclaimed that “If you are offended by nude entertainment, please do not enter.” I entered (purely for research purposes, of course) and found that adult live entertainment, public entertainment, had indeed advanced to another stage—far removed from the Condor and Carol Doda. Again, I foolishly decided that there was nothing further which could be shown.  Once a lady is wearing only stilettos and a smile on stage, that seemed pretty much the end of the Possible. But this was before the internet, adult channels in family motels, TV ads just short of soft-core porn, and the general sexualizing of society. Are we now, finally in the end stage of skin and sin? No. There is holographic sex in the pipeline and it will be so real, one will not miss a flesh-and-blood partner very much, if at all. There are androids which can be built to a customer’s specific requirements and perform sexually, also to his or her requirements. Yes, those will cost plenty, but as this advances—and it seems to be doing just that—imagine a whole section in Walmart for the buyer of more limited means. And sexuality is oozing out into corners not inspected by the vast majority, as evidenced graphically by Playboy’s October 2021 digital cover, which features a man (Bretman Rock) in full Bunny regalia. In fact, it seems that we are way, way, past Carol Doda and the Condor club, headed…somewhere.