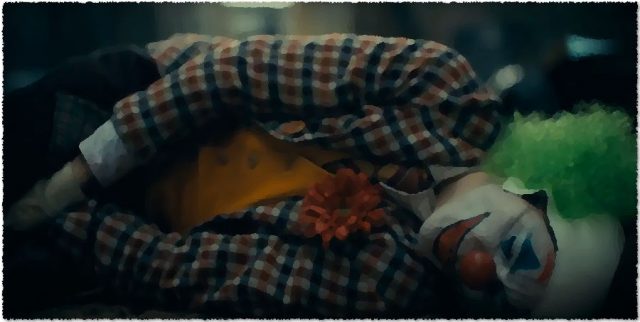 You would think that a film about a psychotic clown, who is (eventually) chased by a man dressed as a bat, would be a hilarious one. But Todd Phillips’s 2019 film Joker insists on being a “serious” character study. The film provides a possible origin to the comic book villain and tries to do so in the style of character sketches such as Martin Scorsese’s The King Of Comedy and Taxi Driver. It constantly references these works, and by doing so not only does it remind the sharp viewer of its inferiority, but also manages to misuse those films’ devices in the most ridiculous ways. Its advocates might argue that it is not really about a murderous clown, as much as about a man driven to insanity, so I will try treating it as such while comparing it to its predecessors.

The first scene shows our lead, Arthur Fleck (Joaquin Phoenix), as he puts his clown makeup on, before forcing a smile on himself and bathetically crying a single tear. Next, we see him juggle an ad on a sidewalk before a group of teens steals it. He follows them to an alley where they beat him, and the title of the film pops up. From the start, we are confronted by one of the film’s major problems: melodrama. Indeed, you would think that a film taking inspiration from Scorsese’s work would understand the power of understatement and humor. After all, The King Of Comedy is one of the best black comedies of all time. Instead, the film opens with a scene that is not just melodramatic but features a naked cliché and proceeds to establish Arthur as a victim. […]