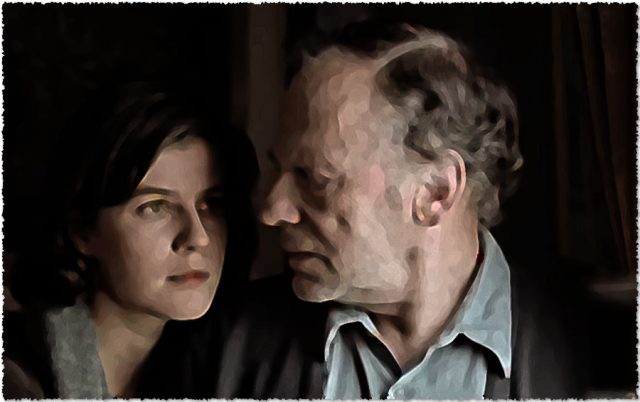 The film stars Irene Jacob as Valentine, a young model who longs for her out of reach boyfriend. We never see him—we only hear him over the phone, where he regards her indifferently. She tells him that she misses him but he responds with, ‘me too.’ Based on his coldness, he doesn’t love her but he still tells her that he might love her. ‘That’s not the same,’ she replies. One night, Valentine hits a German shepherd with her car. The dog is bleeding and the collar indicates that her name is Rita. Valentine frantically returns the dog to her owner—a reclusive, retired judge (played by Jean-Louis Trintignant). Valentine pushes herself in when he does not answer the door. Upon the news, he reacts with indifference. She then takes Rita to a vet and comes to learn that the dog is pregnant. The Judge sends Valentine payment, but he sends more than the cost of the bill. When she goes to return his money, she finds him eavesdropping on his neighbor’s conversations. Chastising him, Valentine informs him that she pities him, but he realizes that it is more disgust that she feels. ‘People have a right to their secrets,’ she says.  […]