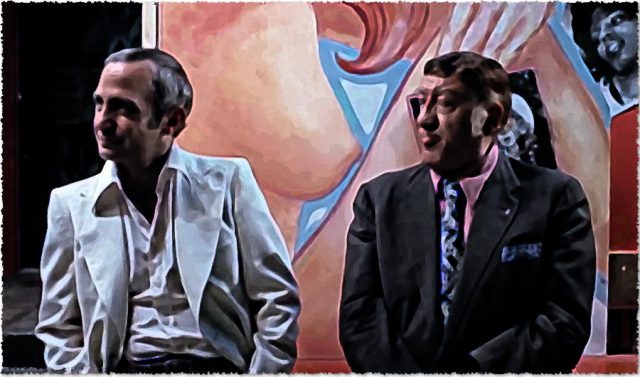 Though I’d been watching John Cassavetes’s The Killing of a Chinese Bookie quite regularly the past decade – had reared my second childhood upon it, as a fact – I only recently understood the import of a key anti-noir scene. As Cosmo Vittelli (Ben Gazzara) breaks into a triad compound, he is not confronted by a benumbed gangster taunting him to shoot, but by an old man splashing water in a pool. It is as if he has regressed to adolescence, down to his childlike interest in the much younger woman bathing him. This much I’d already known, but this time, I realized Benny Wu’s (Soto Joe Hugh) mumbling wasn’t mere sound. “I’m real bad. Real bad,” Wu suddenly confesses to his killer. “I’m so sorry.” The triad is then shot dead, yet it is not so much the death that is tragic as is Cosmo’s inability to digest it: he was sent with a task, and is thus precluded from engaging with its largest moment. And how could it be otherwise? Time is money, the film suggests, whether it’s the time it takes Cosmo to get out of debt, the unconscious zeal with which he is once again indebted, or the fact that, as a private enterprise, criminality is as wasteful as any other – down to its paring away of “useless” self-indulgence, like pondering death and death’s dimensions. The triad knows he has wasted his life, but has been so pampered by hierarchy and habit that waste is the only logical outcome. Having lived transactionally, even his young lover shows no emotion and quietly slips out after he is killed, for she seems to understand this was but a business decision among a thousand other business decisions which may or may not erupt in mayhem.

Now, it would be wrong to blanch The Killing of a Chinese Bookie of its totalizing “point”, yet there is so much else moving in and out of the film’s outskirts that reducing it to aphorism is even worse. John Cassavetes plays with subterfuge, tension, winding trails that lead to dead ends and dead ends that fraction into avenues, down to the film’s enigmatic title. I mean, who is the ‘Chinese bookie’, if not – as Mort (Seymour Cassel) suggests then denies – triad boss Benny Wu? Yet the triad is too powerful to be a mere bookmaker and has almost certainly engaged in murder, himself. If anything, the film’s ‘bookie’ is both concept and adumbration, and it is telling that critics, who panned the film upon its release, never bothered to analyze its inner mythos. “They’re very resentful,” an Italian gangster says of the triads, “because they don’t know whether they’re Chinese-American, or American-Chinese…” Of course, the gangsters are shown to be correct – Wu has failed to cultivate a meaningful life-purpose – but the irony is that their words are just as applicable to themselves. They are Italians forced to cede ground to an Other, and, not having much except some ground to cede, their identities thus turn. Yes, the triads are one such fulcrum, but Cosmo Vittelli quickly becomes another. A killer far more capable and efficient than the gangsters (another of the film’s enigmas, though still in-character and believable), he is also the owner of a burlesque club, LA’s Crazy Horse West, that Mort genuinely likes and respects for ‘deeper’ reasons he cannot verbalize. But, business is as ever, and Mort is all too willing to prey upon Cosmo’s weakness for gambling. After Cosmo racks up yet another debt, Mort has no issue with sending him to what he expects to be his death, thus taking over his club, despite the fact that Cosmo is as close to being ‘a great artist’ as a guy like Mort can ever hope to come across. “He was the heaviest cat on the West Coast, Cosmo,” Mort says of the triad. “You did what we couldn’t do.” In this way, Mort conflates one kind of respect – the grudging respect between talented, artful killers – with a respect for Art itself, thus putting the two at parity merely because they are both masculine drives, yet failing to understand where and why the two diverge. […]