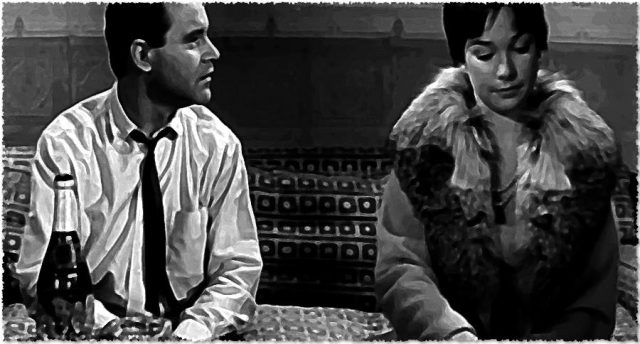 ‘There are some who are takers, and then there are some who get took,’ says Shirley MacLaine’s character in The Apartment. And so goes Billy Wilder’s 1960 witty classic, where we are given a black and white world of work-life drudgery, typing pools, aloof executives and the onlookers who long for any advancement as a way out. Jack Lemmon plays C.C. Baxter, a guy who memorizes facts—like how many people there are in New York City and how long they would stretch if he were to line them together. ‘They would reach Pakistan,’ he says in his opening narration. Useless would be a word to describe this sort of knowledge. And useless could very well be a word to describe him, were it not for his apartment. In fact, he better make himself useful, lest he never get that raise or windowed office.

It’s not that Baxter hates his job—working amid a slog of desks that evokes Franz Kafka. (Orson Welles directed The Trial two years after The Apartment). That Billy Wilder might have influenced his direction is obvious.) He is too upbeat for that—so to speak. Yes, we know underneath the facade that he is lonely and miserable, but for the sake of promotion, or at least the hopes of one, he must remain positive. See, he has this apartment in NYC that many of the higher-ups know about. Not only do they know about it, they depend on it for their evening trysts. Baxter allows them to frequent his abode in the hopes that they might promote him someday. It gets so bad, in fact, that when he actually needs his own apartment due to feeling ill, he is once again manipulated into loaning it out. […]