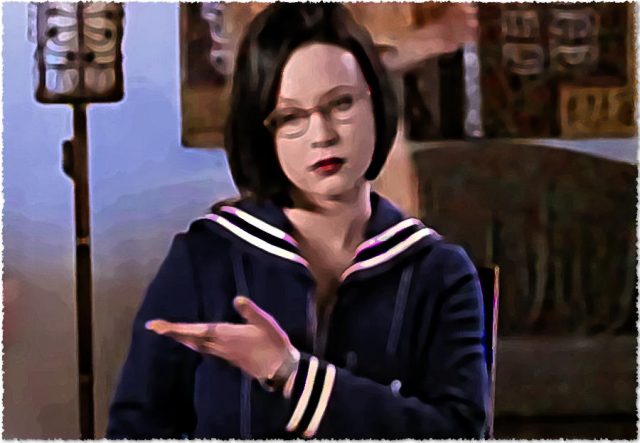 Have you ever felt the odd one out? Or perhaps you feel normal and it’s the world that’s gone bonkers? What if your closest friend no longer wishes to engage in your strangeness? After all, the world isn’t sympathetic and eventually the time comes to grow up. Terry Zwigoff’s Ghost World is a wonderful film that undertakes just this. After having directed Crumb, another film about an oddity, Zwigoff tackles Daniel Clowes’s graphic novel and renders it within film. Enid (Thora Birch) and Rebecca (Scarlett Johansson) have just graduated high school. They have been best friends for years and always embraced being ‘weirdos.’ ‘Those are our people,’ Enid says. They don’t plan to go to college, but rather, they will move in together once they both land jobs. Enid, however, is stuck taking a remedial art class over the summer. ‘It’s an art class for fuckups and retards,’ she speaks deliberately.

Enid is one of those characters that one will either really connect with or not. She has no life plans—not because she is some loser, but rather, nothing requiring such pursuit interests her. Who wants to be like everyone else? One day the girls respond to an ad they see in the paper. It is written by Seymour (Steve Buscemi) who is a lonely record collector. It is one of those ‘I saw you there’ ads, where Seymour seeks some blonde. ‘You were the blonde and I wore a green sweater. Did we have a moment?’ the ad inquires. Enid calls pretending to be the blonde, suggesting a place to meet. ‘Wear that green sweater,’ she suggests. The girls wait and watch him from afar. After he is stood up, they witness him shouting within his car to another driver. They follow him and come to learn that he holds a record sale every Saturday. Enid speaks with him and comes to like him. ‘He’s such a clueless dork that he is almost kind of cool,’ she says. Enid and Seymour are very much alike, as neither feels they relate to the human population. They both struggle with human connection, which is key to understanding Ghost World. […]