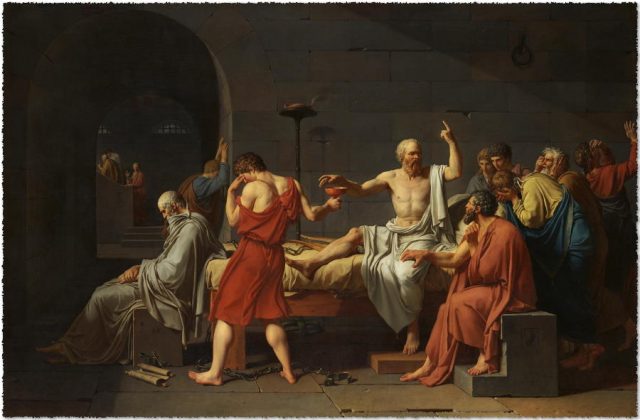 The dangerous man was on trial for impiety and corruption of the youth of the city, but he was calm even though he was facing a penalty of death. The charges were spurious, as the real reason he stood in the dock was that he was a gadfly, an irritant to the power and control of authority and he WAS dangerous—dangerous to the established order, the mores, the context of the society:

“And now, Athenians, I am not going to argue for my sake, as you may think, but for yours, that you may not sin against the god, or lightly reject his favor by condemning me. For if you kill me you will not easily find another like me, who, if I may use such a ludicrous figure of speech, am a sort of gadfly, given to the state by the god; and the state is like a great and noble steed who is tardy in his motions owing to his very size, and requires it to be stirred into life.”

So proclaimed Socrates in Plato’s “Apology”. He would be just one of a few of his breed to question the State and its citizens’ apathetic and lethargic approach to life and living. As he famously remarked in this dialogue, “the unexamined life is not worth living.”

The most important qualification for being a gadfly is being an impartial searcher for truth. One is not a gadfly if one simply criticizes and denigrates someone from “the other side.” A gadfly might, indeed, have certain political or social or cultural preferences, but that does not prevent the gadfly from critiquing “his or her own.” One cannot wear any label of identity, declare some “written in cement” position, have a rigid point of view, live in one’s own little box—and be considered a true gadfly. The TV shows, podcasts, news “specials” and the like do not even come close to this standard, as they are merely iterations on a theme: I am on THIS  side, the side of Good, Truth and Inerrancy; the Other side is Evil, always wrong, and needs elimination from public discourse. Other than Socrates, one good example is I.F. Stone. […]