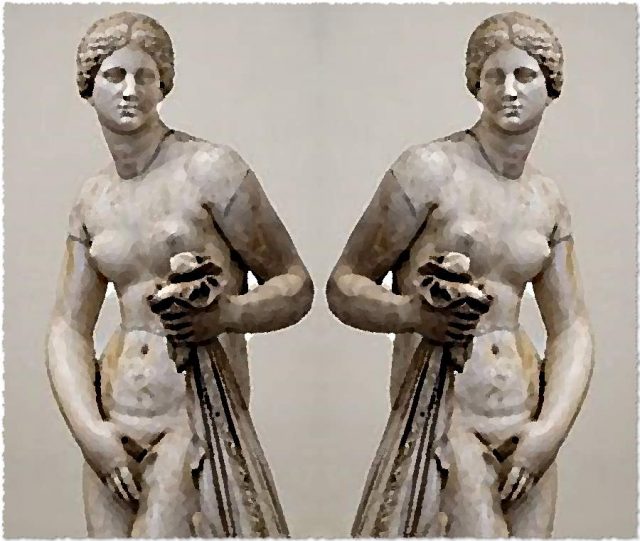 Phryne (fry-nee), whose real name was Mnesarete (“commerating virtue”) was an ancient Greek courtesan from the 4th century BCE. She was said to have been of surpassing beauty—at least to the Ancient Greeks. Praxiteles, who was also her lover, used her as the model for his statue Aphrodite of Knidos, the first nude statue of a woman from ancient Greece. This hetaera is also famous for her trial on charges of impiety, where her lawyer, seeing Phryne’s case in jeopardy, made her bare her breasts for the jury in order to incite their pity (compassion). No one wanted to convict a prophetess and priestess of Aphrodite. This story may be apocryphal, but the idea that the mere sight of a woman’s breast may lend weight to a positive verdict is interesting and maybe instructive, though our modern juridical practices probably preclude such a tactic.

There are mysteries which confound, entice, and fascinate: What is the true nature of our reality? Where, exactly, was Atlantis, if it ever really existed? How did the pyramids get built? Are aliens Out There waiting to get on Facebook (excuse me…Meta)? But one seems especially intriguing and especially titillating—why, as the story of Phryne suggests, do heterosexual men and hetero women (and many not so hetero) love female breasts?  […]