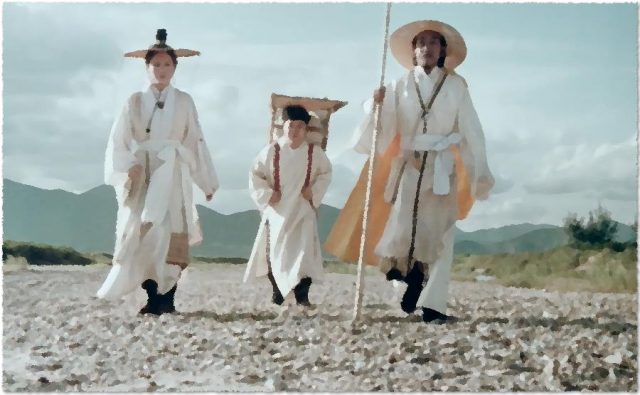 Allow me to preface by stating that not only is this my first time seeing a King Hu film, but also that I am not terribly familiar with martial arts films. While I spent a number of years watching Japanese samurai classics, they are not martial arts films. Martial arts cinema is primarily combat-driven, while King Hu manages to transcend many of the limits of the genre, ensuring Raining in the Mountain remains one of the better films within this niche.

The film takes place during the Ming Dynasty, within a remote mountain village where there is a monastery. Nestled within the deeply embedded forest, already something is amiss—the Buddhist principles of peace, the remote beauty, the places to where one can retreat and yet—perception is not reality. It is not long before we notice that those who inhabit this holy place are actually in competition—bargaining, bribing, betraying—all with their own individual agenda and form of marshaled violence.

The coveted item is a sacred handwritten scroll that is supposed to be worth a lot of money. How much exactly we don’t know, and nor does it matter. Individuals who were brought to protect the scroll are soon attempting to steal it for themselves, and so begins an affected display of the film’s well-choreographed combat, coupled with sensationalized sound and nature background. It’s not that the scroll itself is evil, per se; it’s just that it seems to cause everyone around it to become evil. However intended or not, the scroll merely is, despite how everyone goes on about it. […]