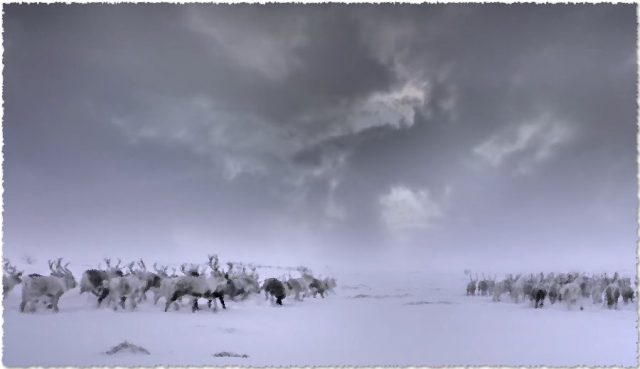 This planet has always been picturesque. Yet, what of the arrival of humans? What have they done to undermine it? One only need watch Michelangelo Antonioni’s Red Desert to see. From factory to industry, we’ve made this world harsh, uninviting. Not to mention our impact upon global warming. As example, Central Texas recently had the highest number of tornadoes reported in a single afternoon. Outside, the air was thick and too warm for March. We know how it got this way, but more importantly, where will it continue?

Les Saisons is not quite a documentary, but more so an observational narrative. Directed by Jacques Perrin and Jacques Cluzaud, this is the film for one who wishes to listen and observe. As example, the opening scene is that of the brutal cold, presumably during the Ice Age. We are given shots of bison that remain tenacious, yet partly frozen. They cower within their self-made corner in an attempt to create heat, whilst the wind overruns them mercilessly. ‘Winter has lasted 80,000 years,’ the narrator says. ‘In such hostile conditions, animals resist the freezing cold. Over this great expanse, traces of man are scarce.’ Then, we see an intricate pile of rocks that only humans could have made, which serves as a landing place for some owl. […]