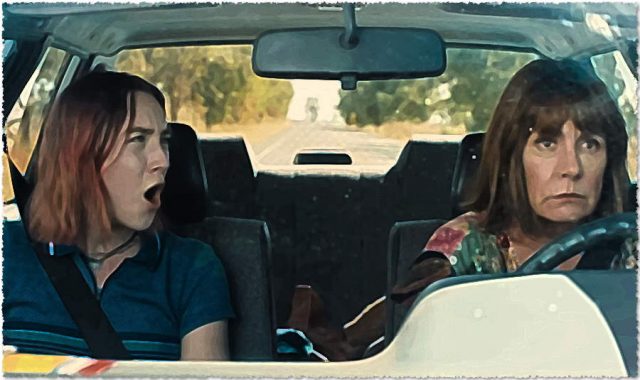 When you are 18, your identity resides in the past. Where you are from, where you went to school, and who your parents are. You simply haven’t lived long enough to accumulate a string of accomplishments, nor have you had the opportunity to make enough life choices to define you. So, when you are uprooted at 18 and transplanted to a university—‘Where are you from? Where did you go to school?’—these are the questions asked. They serve as a shallow introduction—a way of establishing your place—of defining you—within these new surrounds.

Lady Bird is directed by Greta Gerwig, and I was familiar with her performance in Noah Baumbach’s Frances Ha (2012), which is one of the most cinematically unattractive films I have ever seen. Shot in dingy black and white for no other reason than to evoke French New Wave, the film is typical Baumbach insomuch that you can almost hear him whispering, ‘This is a Noah Baumbach film. Expect it to be intellectual with lots of literary namedropping.’ His films are sciolistic in some way or other, but admittedly there was something about Frances Ha that made me enjoy it, despite its weaknesses. Perhaps that something is Greta Gerwig’s performance as the ambitious yet vulnerable Frances.

Lady Bird stars Saoirse Ronan as Christine, a high school senior who prefers to be called Lady Bird, rather than her birth name. The reason is never explained but we can gather that she doesn’t like her ordinary life and so this is her attempt to differentiate herself. ‘Do I look like someone from Sacramento?’ she asks. ‘I hate California.’ Her mother Marion (Laurie Metcalf) works double shifts as a nurse and she takes her daughter’s words as a slight. ‘You have a great life,’ she informs. But Lady Bird, in midst of her longing, doesn’t see it. ‘I wish I could live through something. I want to go to the East Coast,’ she says. ‘I want to live where there are writers.’ ‘You can’t even pass your driver’s test,’ Marion reminds. (Gerwig, who is from California and attended university in New York, based Lady Bird on her own experience.) […]