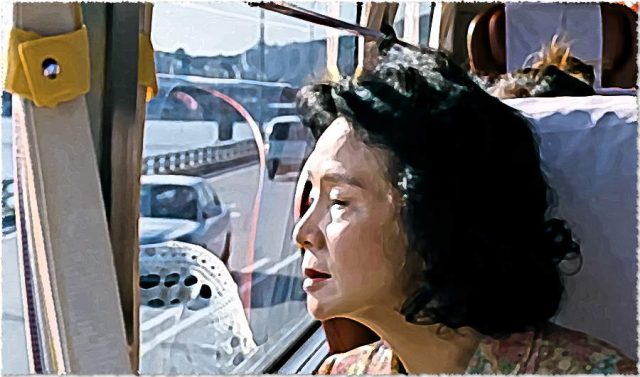 In the same way that Steve McQueen’s Shame uses sex addiction merely as one avenue into deeper issues, Lee Chang-dong’s Poetry takes a similar tactic with its protagonist’s malady (Alzheimer’s) in order to play upon its own – not just deeper, but insidiously so – concerns. For all the film’s talk about beauty, and its genuinely poignant moments of personal confession and aesthetic consideration, there is a sense of pervading cruelty which is under constant subversion, from the opening moments of a uniformed girl’s corpse floating face-down in a river – the title “Poetry” almost demurely phasing in beside its stillness – to Yang Mi-ja’s persistent self-deceit, which she both helplessly suffers and, in a way, actively (and selfishly) utilizes.

What do I mean by this, exactly? Of course, Yang Mi-ja (or just Mi-ja; played by the pitch-perfect Yun Jeong-hie) is not to blame for her sudden cognitive ailment – such is common enough for a sixty-six-year-old. And, at least outwardly, she is a kind, beautiful, somewhat genteel woman, with an almost precious comportment in her dealings with others. She has raised her divorced adult daughter’s son in her stead (the daughter, without a voice or body for most of the film, lives in Busan) and also works as a caregiver for a partly-paralyzed old man, Mr. Kang (Kim Hee-ra). All worth at least some admiration, surely. Lee Chang-dong introduces her in a doctor’s visit: Mi-ja’s complaints about arm pain quickly turn towards the more concerning issue of memory loss. She has begun to forget common words, which embarrasses her, but also becomes something she quickly learns to charmingly deflect from. When, in a phone call with her daughter right after, she neglects to mention this troubling issue, the viewer knows something is awry – indeed, this seems heralded by a grim scene outside the hospital: the floating corpse has been found (suicide, apparently), and the girl’s mother is in a mournful daze, creating a spectacle where several bystanders watch in mute fascination as the disheveled woman mutters and groans and collapses on the street. Nothing is explicitly stated – the event occurs matter-of-factly, with little dialogue. It’s a good scene, playing into the idea of a public’s inability to sufficiently deal with its darker elements, and will have deeper relevance for Mi-ja, later on, for this will not be the first time she encounters the dead girl’s mother. […]