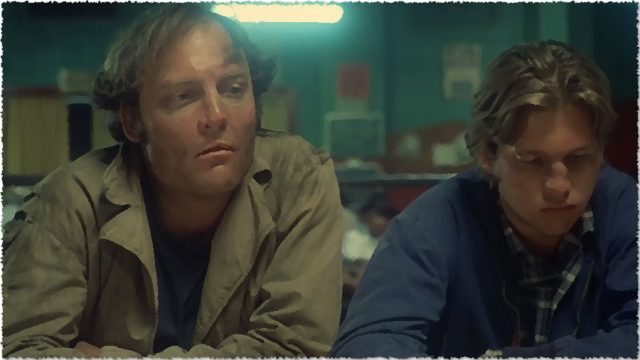 There is something universal that is felt when one witnesses a failure. Maybe human nature causes us to fear that failure ourselves, as perhaps our insight is more so revealed through the near misses, rather than the home runs. As in Arthur Miller’s Willy Loman in Death of a Salesman, or the desperation and loneliness felt within Tennessee Williams’s The Glass Menagerie, these characters long for more, and in doing so, they suffer. They seem aware enough of the outside to know that there is more, and that there could be more if only they had that missing something. Of course, very often they don’t know what that something is. Not to mention that the outside happens to be too brutal and harsh for their fantasy.

John Huston’s 1972 film Fat City is a great film that is not about a great man. Rather, he is a has been, and since his glory days, he has resigned his life to loser status. Stacy Keach plays 30-year-old Tully, a washed-up boxer who, since his glory days, has devolved into alcoholic stasis. Jeff Bridges plays Ernie, a young man ten years his junior, who seems up and coming but lacks backbone. The two men often mirror each other—on one hand, Tully has lost what he once had and while Ernie has some verve, he has yet to prove it. Perhaps Tully sees himself in Ernie and so he longs to get back into the ring to reprove himself to the world.

Neither man has a life worth envying. In one scene, Ernie is coerced by his young girlfriend into marriage. She is moody and distant and admits she is nervous that she might be pregnant. The scene is short, but one can see they have nothing in common—she merely wants to cook for him and see him everyday. That John Huston places the scene within a motionless car is important—they are going nowhere, and his marriage to her will likely also go nowhere. He might have a few boxing wins but then will resign to a life of mediocrity. […]