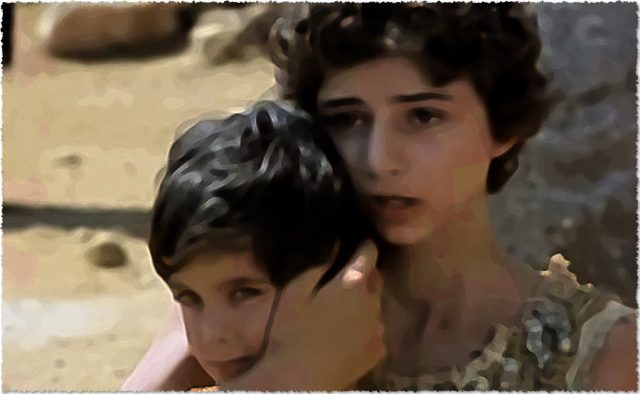 Although Michael Cacoyannis’s Iphigenia bases itself on Greek myth, the filmmaker’s manner is one of unusual realism. Amid the sweat and grime of the characters, the stakes of Euripides’s tragedy (Iphigenia at Aulis) become more relatable, and the fantastic elements of the drama take on a certain ambiguity. Even though a large portion of the narrative is set in motion by “The Gods”, these are never seen onscreen. While this absence is also a factor in the play the film adapts, the director’s grounded approach makes the viewer prone to consider whether these entities are actually real or the result of mass delusion. Suddenly, what was merely an exploration of fate in the original piece also becomes a commentary on the way beliefs gain power through belief. This is one of the many ways through which Michael Cacoyannis revitalizes the largely outdated melodrama.

The story takes place on the shores of Aulis. The abduction of Helen has sparked hate for the Trojans, and the Greek armies wait to sail to war. From the start, the filmmaker presents his audience with the sort of images that sets this adaptation apart from most takes on ancient Greek culture. We see the soldiers as they lay on the sand, bathe by the surf, and fight among themselves for food, and there is an unrefined quality to the goings-on that reminds one of the eye-level realism Werner Herzog employs in his best films. By the time the sequence ends, it is easy for the viewer to believe that the Greek armies once stood by this coast, waiting for the winds to blow. […]