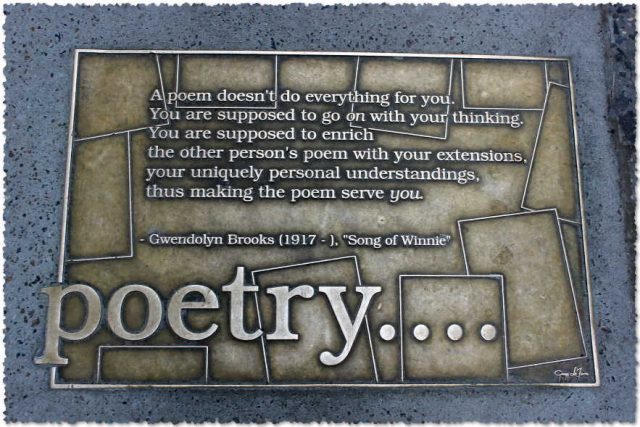 Poetry is a fascinating art because there are so many ways to succeed (and likewise fail). As example, a Gwendolyn Brooks poem succeeds differently from that of a Yeats, Rilke or Crane. She manages to capture the ‘ordinary’ and insert it into a form or rhyme most memorable. She somewhat resembles Hazel Hall in this way. While very different poets in their own right, both Brooks and Hall tackle the average and everyday in such a way that is insightful and memorable. They both contain phrasings that ‘hook’ readers, leaving us longing for more. Kurt Vonnegut, with his spare, poetic writing of Saab dealers and Holiday Inns within Midland, Ohio—the dullest city imaginable—might be the prose equivalent.

I don’t recall the first time I read Gwendolyn Brooks, but I can say that there isn’t an instance when I didn’t know her work. (I believe I read ‘We Real Cool’ for the first time in high school.) The first African-American to win a Pulitzer Prize (back when they meant something and went to writers of quality), she has since cemented herself as an important writer within American Letters. Her verse is clever and musical—wherein her poems possess great synergy. Seemingly plainspoken, yet intricate and intelligent, her verse tugs with her deft pull of words. A master of sonnets and couplets, her rhymes are natural and internal—they move with the reader.