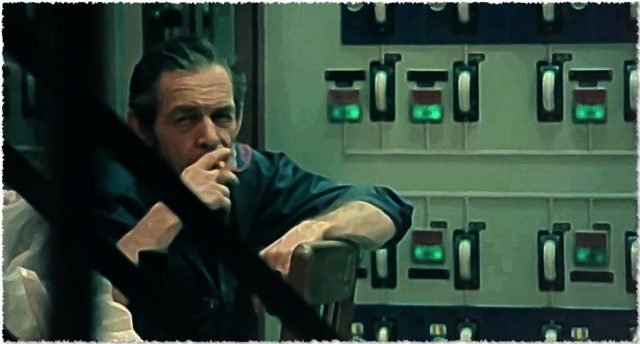 Godfrey Reggio’s Koyaanisqatsi: Life out of Balance is a film with no characters, dialogue, or traditional narrative. Like most works of ‘pure cinema’ it is a film of montages and camera-work – specifically, of time-lapse photography and ponderous tracking shots across enormous objects and places. Throughout the film Philip Glass’s fantastic compositions refract from the imagery like slivers of light from an oil slick, and it is only fair to give him equal credit in the final product, as it would be just a novelty without his elevations. When reduced to its basest form my view has always been that cinema’s core equation consists of screenplay, visuals and sound performing a precise and delicate exchange, with the result being media that tricks your brain into extreme states of being. It’s a precise illusion; if any aspect falls a little flat it can completely pop the balloon. Koyaanisqatsi despite dispensing with the screenplay still manages to sustain the façade, as in other works of the ‘pure cinema’ movement. We slowly transition from nature and humanity’s ancient past into the metropolitan and the industrial, culminating in absolute modernity, and the explosion of a rocket ship (in real terms the launch of the Saturn V rocket cleverly spliced with footage of an Atlas missile). The movie works despite its lack of clear narrative due to the themes we might assign upon viewing.

But I’m digressing, so let’s digress a little differently. Godfrey Reggio spent fourteen years of his life training to be a friar, a period in which he conducted prolonged fasting, vows of silence and intense prayer. He is a noted progressive and has done a lot of charity work with disadvantaged groups, which is clear in the moments humanity appears on screen. It’s admirable however that barring these shots, he doesn’t choose to spend too long on sanctimony. Philip Glass has worked with Reggio for the lion’s share of his career, and that is to Reggio’s benefit. His soundtracks never quite live up to the enormity of Koyaanisqatsi, but he nevertheless has a talent for synchronous tracks and montages. […]