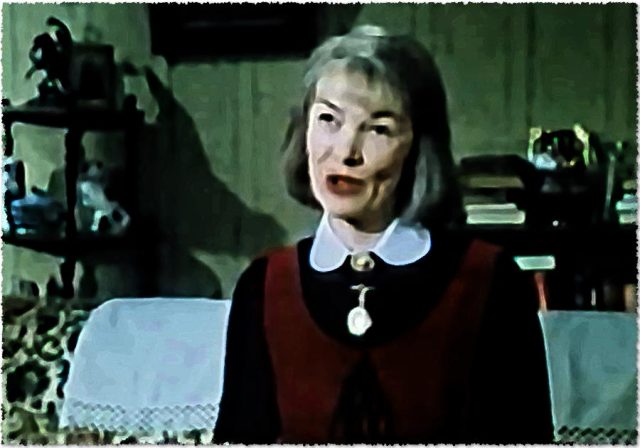 Stevie Smith (1902-1971) prided herself on her individuality. An iconoclast born Florence Margaret Smith, she lived her life in England and died of a brain tumor at age 69. She worked a publishing office job for 30 years until her poetic achievement allowed her early retirement. She never had kids nor did she marry. In fact, she shares similarities to both Marianne Moore and Emily Dickinson in that all three women have an oddness (or is it fondness) about them. Stevie Smith’s verse is unique in that she uses a nursery rhyme approach whilst addressing sad or ‘dark’ themes, often with biting humor. It was rumored that she was a combination of high wit with a dash of the naïve. But then again, aren’t we writers all a bit of this?

Stevie (1978) stars Glenda Jackson as the lead and what a lead she is. Whilst this isn’t a One Woman Show, the film focuses much on the poet’s daily life, her relationship with her affectionate aunt (Mona Washbourne), her views on life, art and poetry. ‘Not a literary person,’ Smith says, with regard to her aunt. The two laugh it up over sherry and sometimes gin. At one moment, Stevie Smith rejects a marriage proposal from a male suitor, claiming that she is better as a friend. ‘I need to be away,’ she says. ‘But I always come back.’ […]