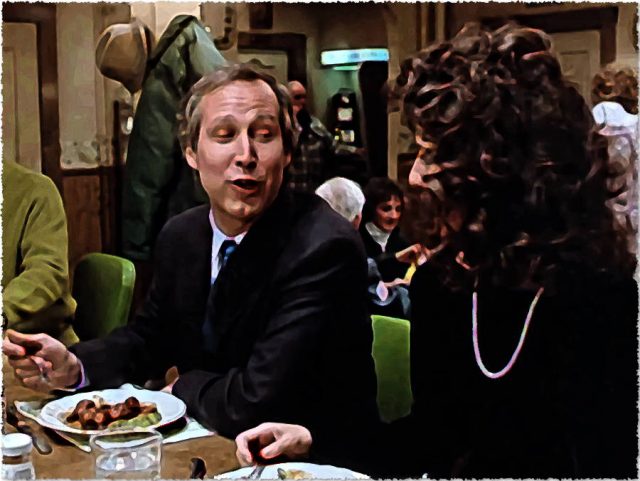 ‘Being a fake is what I do best,’ Andy Farmer tells his wife Elizabeth when the couple has bribed their local townspeople in recreating a Norman Rockwell universe within their small Vermont town. George Roy Hill, who is known for Butch Cassidy and The Sundance Kid, The Sting, and Slaughterhouse Five, has tackled this delightful comedy that pokes fun of pretension and image with just the right farce. In Funny Farm, Andy (Chevy Chase) has traded his New York sports writing job for a quiet, small-town life where he plans to write his Great American Novel. Likewise, the publishers have already issued him a 10K advance in the hopes that his talent will deliver. Andy’s wife, Elizabeth (Madolyn Smith Osborne), is a schoolteacher who reluctantly welcomes the change as the two plan to uproot and start a family.

If this concept already sounds cheesy, it has succeeded. While the script is of course going to have everything go wrong (including snakes and bugs), George Roy Hill utilizes the appropriate light-hearted humor with a splash of the sardonic. In his review, Roger Ebert cleverly refers to the townsfolk as those one might expect to see out of a Stephen King novel. They’re not so much dumb (even though some are) or evil as they are dispassionate and unfriendly. Odd would be too nice a word. When the Farmers’ movers are lost and ask for directions to Redbud, they address an old man by the name of Mac. ‘How did you know my name was Mac?’ the man asks. ‘I just guessed,’ the mover replies, to which the man remarks, ‘So why don’t you guess your way to Redbud?’ […]