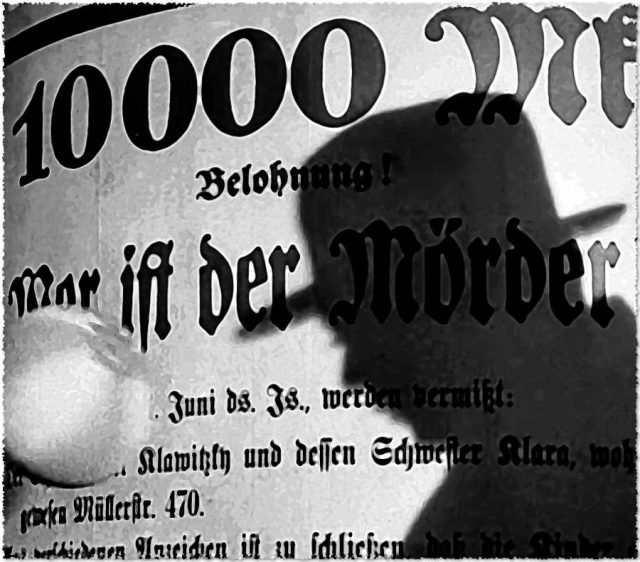 Fritz Lang’s M is a film so iconic in its visual narrative that it is difficult to imagine the scope of cinema without it. On one hand, M has been labeled a noir and on the other it is a crime story. Not horror, necessarily, despite being a film full of fear and terror. As Lang’s first speaking film, he uses both sound and silence effectively, where M begins as a dismal nightmare. The opening consists of children playing in a circle and singing a song about the neighborhood children who have been murdered. Everyone knows that a predator lurks about, so much so that even the children have invented songs. ‘He’ll turn you into mincemeat!’ they sing. Then, when one of the mothers overhears, she scolds them for singing it. The children are playful and occupied within their innocence, albeit there is an eerie quality to the scene, where something feels not right. One could even say it is rather creepy.

Neighbors know that children have been disappearing—a fear feeds the city, and the parents don’t want children walking alone. In another scene, the murderer—Hans Beckert (played by Peter Lorre), eyes a young girl through a mirror. Throughout Fritz Lang’s film is his use of shade and reflection, be it glass, mirrors, or shadows at night. The girl manages to elude him when her mother comes to greet her. ‘I wanted to meet you halfway,’ the girl informs her mother, unknown to either that in the corner lurks a predator. Lorre is both a good and odd choice for the lead. His face is rotund and at times tender—he appears childlike and lost, as though he is unsure where he needs to go. His days continue in shadow and his world is gray. There is a loneliness to this place set in 1931 Germany. People move about like ghosts—detached, as though walking in some netherworld. One gets a sense that they don’t realize how miserable they should be. […]