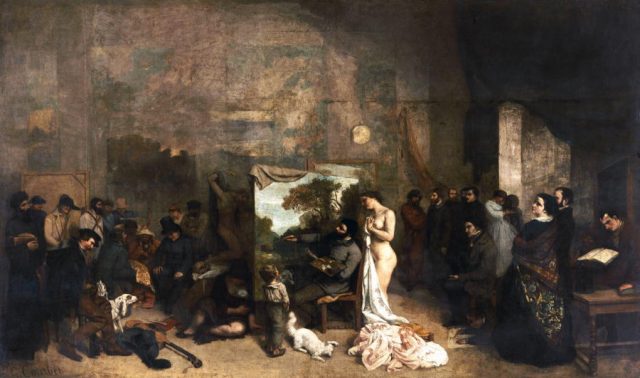 In 1855, three of Gustave Courbet’s paintings were rejected by the Exposition Universelle, something which Courbet took as a personal affront. It was, after all, the single largest exhibition in the history of the salon with a projected attendance numbering in the hundreds of thousands. In retaliation Courbet erected and promoted an exhibition all of his own, situated just across the road from the Exposition itself. It was called the Pavillion of The Real and inside the public were treated to over forty paintings by Courbet. Among them was a painting was called ‘L Atelier’ or ‘The Painter’s Studio: A real allegory summing up seven years of my artistic and moral life’ (1855).

The artist’s studio is today considered a genre in its own right. It is a genre which lends itself well to allegory in that it offers a means of representation of the practice of art and offers up the artist as a personification of that practice. Variations of this genre can be informative illustrations of arts changing social history, the artist’s professional character and his production in relation to a market economy. Common features include introspective self-portraits such as Gericault’s ‘Portrait of an Artist in his Studio’, or the gallery of a dealer/connoisseur such as we find in ‘The Artist’s Studio’ by Amelie Legrand de Saint-Aubin. Images of poverty, power, fame, success and failure occur alongside images of the artist’s technical and iconographical resources. Sometimes we see the artist as he wishes to be seen; other times he sees us seeing him. In the paintings of Vermeer and Velasquez the studio is a site of encounter, between the artist and his model as well as other value systems. In the work of Braque, Matisse and Picasso, the studio is a metaphor for the psyche, a private world of individual creative passions. […]