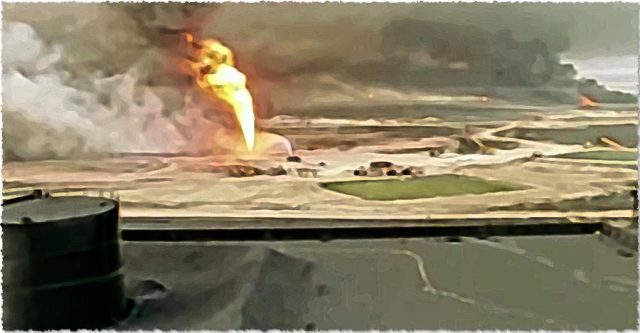 The first few seconds of Werner Herzog’s Lessons of Darkness provide a key to understanding the filmmaker’s approach. The picture opens with an excellent quote: “The collapse of the stellar universe will occur – like creation – in grandiose splendor.” The quote is attributed to Blaise Pascal, but a bit of research shows Herzog actually wrote it. In this manner, the artist seems to fill the role of an illusionist, as facts do not seem as important to him as playing with the audience’s perceptions. One could argue that all artists are illusionists because, in correspondence with the old saying, art is a lie that tells the truth, but what makes Herzog unique is that he seems hyper-aware of his nature. Throughout the film, Herzog’s narration frames the oil fields of post-Gulf War Kuwait from an almost alien perspective, prompting the viewers to honestly examine what is shown instead of simply projecting their biases. While a lesser filmmaker would tackle this film’s delicate subject in a clear-cut and sentimental manner, Herzog commits to showing the horrors of the setting in a more nuanced light. In his work, the ravaged land resembles a strange underworld, and the motivations of its oil workers remain mystifying. Herzog’s interest lies not in recreating reality, as it does with most filmmakers, but in reframing it, or even creating his own, to deliver insight. […]