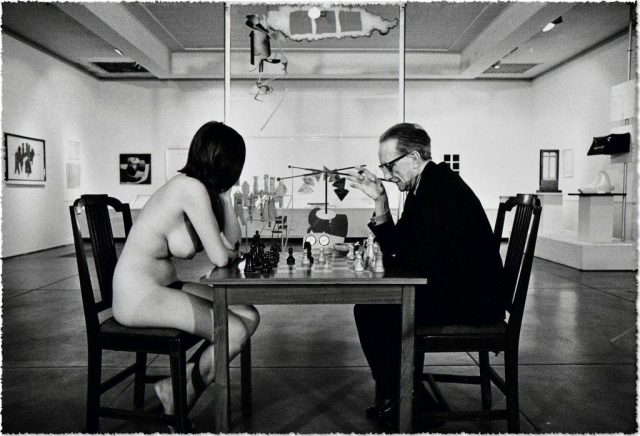 This is a picture of Eve Babitz playing chess with Marcel Duchamp (she’s the one with no clothes) in the Pasadena Art Museum ( now the Norton Simon Museum).  She was a 20 year-old L.A. community college student in 1963, already a prominent player in the Hollywood, glamour, party scene.  He was, well, he was 76 year-old Marcel Duchamp—the man who painted the amazing, kinetic “Nude Descending A Staircase” (1912), the man who placed a urinal in an art exhibit, the man who put a mustache on the Mona Lisa with the title, L.H.O.O.Q., which, when said quickly, and the French letters are said phonetically, sounds like “Elle a chaud au cul” (“she has a hot ass”  or “hot in the ass”, a French vulgarism referring to a woman’s prediliction for sexual adventurism).  Duchamp was very fond of puns and wordplay and this is one which has been living in infamy for a long time.  He was considered, along with Matisse and Picasso, as one of the three artists who helped define the revevolutionary developments in the plastic arts at the beginning of the Twentieth Century.

Eve Babitz was very fond of, apparently, everything.  She referred to her lifesyle more than once as “over-boogie.’  If you saw  the movie “Boogie Nights” you have a small ideas of her larger life. She lived hard and fast, from a smouldering kiss, at 14 years of age, from Johnny Stompanato (an “afilliate” of the Cohen crime family in Los Angeles, and before he was stabbed to death by Lana Turner’s daughter) in  in his car, to Jim Morrison of The Doors, to Harrison Ford, to Steve Martin (to whom she suggested that famous white suit), to many others.  But she wasn’t just a party girl with a wild and restless spirit, but an accomplished author, with a sharp eye and felicitous writing style of fiction and non-fiction (I loved her “Slow Days, Fast Company”). Her  millieu was the 60s and 70s in L.A., Hollywood, and vicinity—here was Igor Stravinsky’s goddaughter hobnobbing with the glitterati and having a grand old time—her very own, willful time.  In her Introduction to her wonderful essays, “I used to Be Charming,” there is this quote at the top of the first page: […]