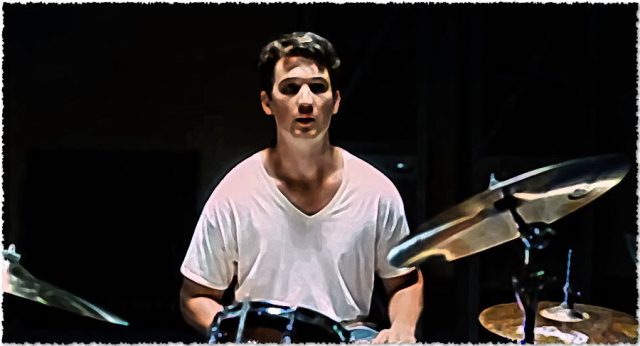 Few films address the drive required for artistic greatness. Rather, we are presented with notions that are nebulous—wherein so-called ‘achievements’ are validated via one’s desire to be famous. But greatness is not measured in fame. In the world of Damien Chazelle’s Whiplash, artistic craft exists as an objective thing, and certain musicians are notably better than others. Those who excel move on to First Chair. And those who can’t change their major to pre-med. (‘I guess he got discouraged,’ Fletcher says.) I must preface this by stating that I am not a musician, and so I am unable to comment on the accuracy and perfection of the playing therein. But I can comment on the writing, which is extremely accurate with regard to the intensity involved when one wishes to triumph. As example, when an artist strives for greatness, compromises must be made. Often, artistic achievement comes at the expense of friends, family, career and a social life.

Miles Teller plays Andrew Neiman, a first-year student enrolled at Shaffer Music Conservatory. With saxophonist Charlie Parker (1920-1955) as his hero, Andrew does not merely play the drums—he lives them. More than anything, he longs to be ‘One of the Greats.’ He desires this so much so that in an arrogant moment, he breaks up with his girlfriend Nicole (whom he only seems to call when feeling good) on the basis that his drums are more important and that she would only get in the way. It is a cold move on his part but understandable, given his perspective. Paul Riser plays Andrew’s platitude-driven yet loving father who clearly does not understand him. Early in the film, the two are seated in a theatre as his father (Jim) pours Raisinets into a large tub of popcorn. ‘I don’t like the Raisinets,’ Andrew whispers, as he picks for the popcorn. ‘I just eat around them.’ Bemused, Jim looks at his son and responds, ‘I just don’t understand you.’ […]