How the story goes is this: Pablo (Jose Antonio Valdelomar González) and his friend Meca (Jesús Arias Aranzueque) steal cars. They do this regularly, then carry out a robbery, and once done they burn the car they stole. They frequent the occasional bar where a young girl named Angela (Berta Socuéllamos) works. Pablo approaches her and asks her out. She agrees. He likes her and she returns the feeling, despite his living within a one-bedroom hovel. Without hesitation, she becomes his girlfriend and begins to accompany him and his two friends on various crime-filled excursions. […] 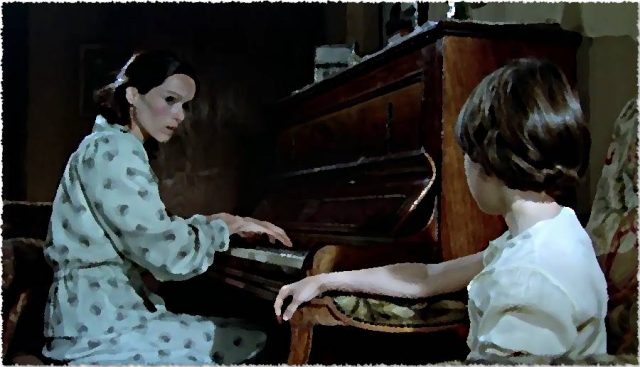 A solemn piano piece plays over sentimental family photos; young Ana, whose wide-eyed face is lingered over in the images (and will come to dominate the screen), moves about in the shadows of a great house. All is sealed off, every space shuttered and the house’s stately surfaces only barely defined by what visible light there is, so that Ana, in a nightgown, appears luminous and strange. She seems to be homing in on a room where a man and woman make furtive and intimate congress; suddenly, the man is seized by some attack, and as the woman rushes out of the room in a disheveled state, the look she gives Ana (and her hurried exit from the darkened manse) tells the viewer just enough about their relationship, or lack thereof. Ana, throughout all of this, is impassive, and when she sees the man lying, slackened by death, in the sheets, she seemingly does not understand why the man cannot respond to her quiet inquiry. This is her father, some distinguished military figure if the pictures offer any clue, and his face now is as opaque as the gloomy interiors of his home.

There is a mostly finished glass of milk on a nearby desk. Its significance, for now, is unknown to us save for Ana’s curious attention towards it in the midst of her father’s death. She takes it and cleans it and in the kitchen (brilliantly lit, the very picture of purity, now) her mother finds her and teasingly chides her – but not all is as it seems. […]